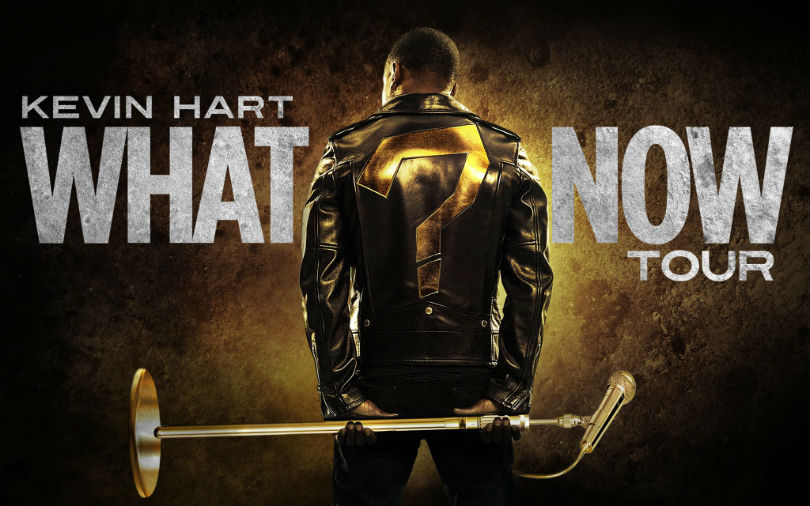 It’s been an eventful weekend for Torontonians, considering there was Caribana festival, OVO Festival and VELD. But with all music and dancing aside, thousands of others were interested in laughing and attending the comedic stand-up show of actor Kevin Hart (Get Hard), who was in town for his “WHAT NOW?” Tour.

Selling out three shows in Toronto, which Hart says is his “first-ever in history,” audiences gathered at the Air Canada Centre for a two-hour stand-up that wouldn’t disappoint, even if that meant no cameras or phones. In fact, if audiences were caught using their phone or sneaking in a picture, security would immediately escort them out.

The “WHAT NOW?” tour started with Hart’s opening acts and friends, The Plastic Cup Boyz: Joey Wells, Will Spank Horton and Na’im Lynn. If you’ve previously seen Hart’s other stand-up shows live like “Laugh at my Pain” and “Let Me Explain,” then you’ll immediately recognize the trio. The three each took turns on stage to perform their sketch and had their fair share of different topics to poke fun at. Even though they were the opening acts, they all gave knot-twisting performances that would prepare the audience for an entertaining evening.

As soon as it was Hart’s turn to step up on stage, the audience went wild. He made his grand entrance with a James Bond opening sequence on screen, which meant the night was going down on a high note. The moment he appeared, Hart was pumping up the crowd and ready to leave his actual heart (pun intended) on the stage.

He went straight to business and explained that the title of his new tour was based on the repetitive question all his friends and family asked him. As a full-time father/actor/comedian, he would constantly be asked, “Kevin, what now?” which gave him the inspiration for the show.

From there on out, Hart’s stand-up was mainly focused on his life with his family and friends, and the occasional sexual joke. The audience was cracking up a storm in the venue. Even Hart would break down and laugh before telling the punchline of one of his jokes. It was just that great of a show to be at! It’s hard to not talk about what he said because it would be releasing his new material to the public. You just had to be there yourself to know what exactly went down.

Hart’s “WHAT NOW?” tour will continue around North America until October 11, 2015. In the meantime, you can buy Hart’s recent film Get Hard co-starring Will Ferrell in stores now. Check out our Blu-ray/DVD Combo pack review here.