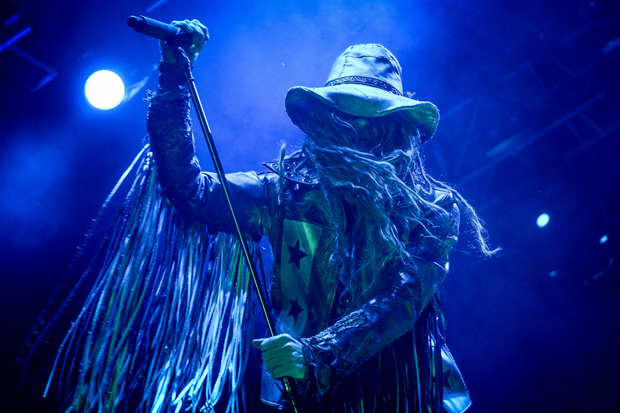 It’s the beginning of August so it can only mean that its Bloodstock time of year and Thursday nights on the Sophie stage are becoming a special thing within themselves and this year with Nottinghamshire’s Pirate metal outfit Red Rum taking the stage there was more of a party atmosphere than ever before.

Friday
By Friday Bloodstock is in full swing but Raging Speedhorn don’t quite live up to expectations. It’s great to have these guys back and the new material sounds like its classic Speedhorn, sadly today though they aren’t quite on top form. Belphegor on the other hand rip through their set like it’s the last one they will play, when ‘Bondage Goat Zombie’ is over I actually think the crowd were glad of the rest. Next up on the Ronnie James Dio stage are Enslaved and while they only have time for five songs, you cannot argue with quality of their performance. Over on the Sophie Lancaster stage Hang The Bastard put on a solid if unspectacular set, there is certainly more in their locker.

Back on the main stage Sabaton almost steal the show for the entire weekend. Their style lends itself to creating a great atmosphere both in the crowd and on the stage and having a massive tank as part of their stage set up is never going to be a bad thing. By the time the encore is over you know you have witnessed something special. Friday headliners Trivium are not everyone’s cup of tea and that’s evident by the rather sparse crowd that come out to see them. Technical problems that leave them as a three piece for the first couple of songs and opening up with a live debut for new song ‘Silence In The Snow’ don’t help getting people on their side, but once the issues had been worked out you can’t argue the fact the Trivium are an excellent live band and deserving of their shot at headlining.

Saturday
Saturday saw two fantastic British bands opening up the main stage. First up were thrash outfit Savage Messiah who put in a great display of old school thrash and those who got up early to see them were not disappointed. Sadly Xerath had to cut their set short due to some rather major technical difficulties, but before those problems they were putting on a great show. The party really got started though when Korpiklaani took to the stage. Folk metal might not be to everyone’s taste but in a festival environment it just works and Korpiklaani are probably the best at creating a party feeling and in this case a conga line running around most of the site. You know when Napalm Death play you are going to get a great show and today was no different as they relentlessly pull out classics and future classics alike. Death or Death (DTA) as they perform under are without doubt the highlight of the weekend and more than a fitting tribute to the late, great Chuck Schuldiner. It’s wonderful to see these songs played live again and they are more than done justice by band.

Technically speaking Opeth are probably the best band of the weekend but for me in a festival environment they just don’t work and end up leaving the crowd rather flat. Still you can take away from the majestically crafted songs. It is left to Within Temptation to close the main stage and with a set that spawned their whole career they had an opportunity to produce something truly unforgettably, but sadly it feels like they are just going through the motions. Not to worry though as the night isn’t over as Fleshgod Apocalypse bring their symphonic death metal to a packed Sophie stage, and they didn’t disappoint as they put on a brutal set to bring Saturday’s festivities to an end.

Sunday
Orange Goblin take to the main stage on Sunday to a massive crowd and duly deliver a set that suggests they could have been playing higher up on the bill. Debate among fans about Sepultura and whether it is really Sepultura remains but there is no denying the fact that the band that took to the main stage on Sunday are one hell of a great live band. The old tracks always go down better but the newer stuff still holds their own in the live environment. Like their country mates Korpiklaani earlier on in the weekend Ensiferum know how to bring the party and they certainly bring it today with an hour of expertly crafted folk metal, if you don’t find yourself dancing along there is something wrong with you. The same cannot be said for Cannibal Corpse though who although sound fantastic are also extremely boring which is a shame as the set list was great as well.

They might be called Black Label Society but let’s be clear this is the Zakk Wylde show and to be fair him and the band do put on a good show, but it is severely let down by Zakk’s five plus minute guitar solo. Yes it’s impressive but it goes on for too long and becomes very tedious. So it is left to Rob Zombie to close the festival for another year and what a great job they do. The newer material fits right in alongside the classics like ‘Superbeast’ and ‘Living Dead Girl’ and the inclusion of a couple of White Zombie tracks was great to hear. Sadly the other covers felt unnecessary as there are a lot of great Rob Zombie songs which were left of the setlist in favour for them, but it’s a small compliant on what was otherwise a fantastic way to close another stunning Bloodstock Open Air.