For the uninitiated, Archer is a hard rock/metal trio from Santa Cruz, CA who are set to release their new album, Culling The Weak, via Metalville Records on August 21st, 2015. The band absolutely rips and we can’t wait to hear the full recording in all of its heavy glory. Until then, we’re stoked to have been able to speak with frontman Dylan Rose to get to know him and his band a little better.

For those not familiar with your band can you tell us a little bit about yourselves?
Rose: We’re a hard rock/heavy metal trio from Santa Cruz, CA that aims to offer a fresh take on the musical approaches of our classic influences.

Your new album Culling The Weak is nearing its release. Now that it is complete how do you feel about it, and what has been the response so far?
Rose: Naturally, we’re excited! We’re proud of the steps we’ve taken musically so now it’s just a matter of getting out there and showing everyone what we’re made of. We’ve already been performing songs from Culling The Weak on tour this year and the response has been very encouraging. It’s time to blow this thing up for real now!

What is your writing process like?
Rose: Typically, it starts with a riff – something musical rather than a lyric or vocal melody. Myself or David (bassist) will come up with one or a few parts and bring them into rehearsal for the rest of us to dig into. From there, it unfolds organically with everyone’s input. Then once the music really begins to take form I’ll start to pen some lyrical ideas down and start singing along with parts as we jam them to find the right melodies. The best part is getting all 3 perspectives in on the process. 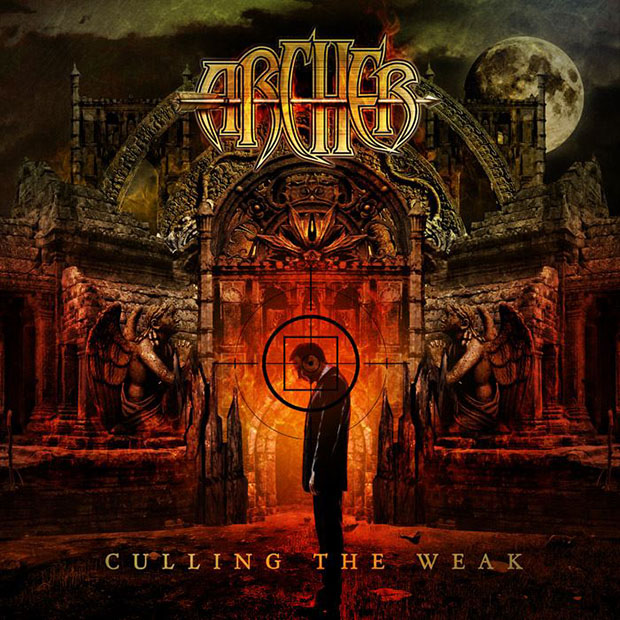 You guys are a heavy band, how does it make you feel when that power and energy you channeled in the studio comes to life in front of a crowd?
Rose: That’s the best, bar none. That heavy metal power and energy you mention is like nothing else. It reduces you to a very pure and instinctual state of being where you and the crowd co-exist in this almost primal place together…. It’s magic, man. I’m sure anyone in this profession would agree. And seeing your ideas mature and evolve from your home studio to a big stage is the ultimate reward.

When you write, do you do so with the live setting in mind or do you write a song just for the song’s sake?
Rose: This ties in with the previous question in that we do have the stage in mind when writing. Of course, sometimes you’re in a different mood and write stuff without thinking about thousands of watts of power and huge crowds because it just makes you feel good to write freely without expectation. You’ve got to honor that too. But when it comes to deciding “Is this metal riff or song gonna work?”, it’s gotta pass the live test. I think it’s important to keep that in mind. And I enjoy the inspiration of imagining my latest riff blowing up a stage. It helps to gauge what you’ve got.

Along those same lines, do you take advantage of technology and email riffs and parts back and forth, or do you get together in a room in a more traditional sense and write together?
Rose: I’m not a fan of online or long distance collaboration at all. The technology is amazing and even necessary in some scenarios but we all live within 10 minutes of each other for a reason. The organic process of working in close quarters and constructing something together in real time is something we really value. To us, it’s how the best results are achieved. Every other method is just a poor facsimile of the real thing. 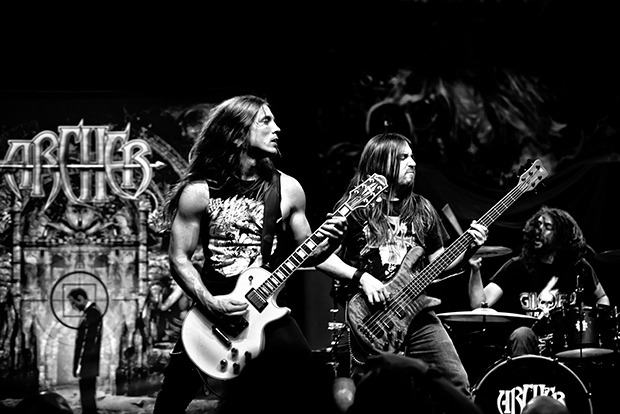 What is the story behind the name of the new record?
Rose: The phrase “Culling The Weak” really captures the overall mood of the album. Much of the lyrics deal with variations on this singular theme including the title track. To be more specific, it sort of chronicles our journey the last 2 or 3 years leading up this album – all the setbacks, struggles, and other bullshit we’ve dealt with to get to this moment. Every band that exists for awhile has their share of difficulties. We’ve just wanted to use it as fuel for the fire. If you aren’t 1000% locked into what Archer is all about, then get the hell out of the way. We don’t have time to waste on all that nonsense. We’ve had to do quite a bit of culling the weak in recent years.

You have toured quite a bit. Is there anywhere you would like to go that you have not been?
Rose: We’re finally going to the UK for our first time in September – really stoked about that. We haven’t hit South America or Australia yet and have only played 1 or 2 shows in Japan before so all that is on the list for touring down the road. I want to experience everything and take our album to the highest heights possible so every new country or territory excites me.

Do you have any touring plans in support of the new recording?
Rose: Absolutely. The first big tour we’re doing upon release is really 2 European tours combined – 2 months opening for Annihilator then 1 month of touring with Doro back to back. It’s gonna be a glorious 3 month grind starting late September and getting us back right before Christmas. Bring it on!

If you were stranded on a deserted island and could only take 3 CDs with you for eternity, assuming there was a solar powered CD player, what would they be?
Rose: Choosing 3 is an impossible task. But off the top of my head today, let’s go with Ozzy Osbourne’s live Tribute (gotta have my Randy Rhoads fix), The Allman Brothers Live at Fillmore East, and definitely some Black Sabbath….. Let’s go Sabbath Bloody Sabbath.

Check out the song “My Atrocity” here.