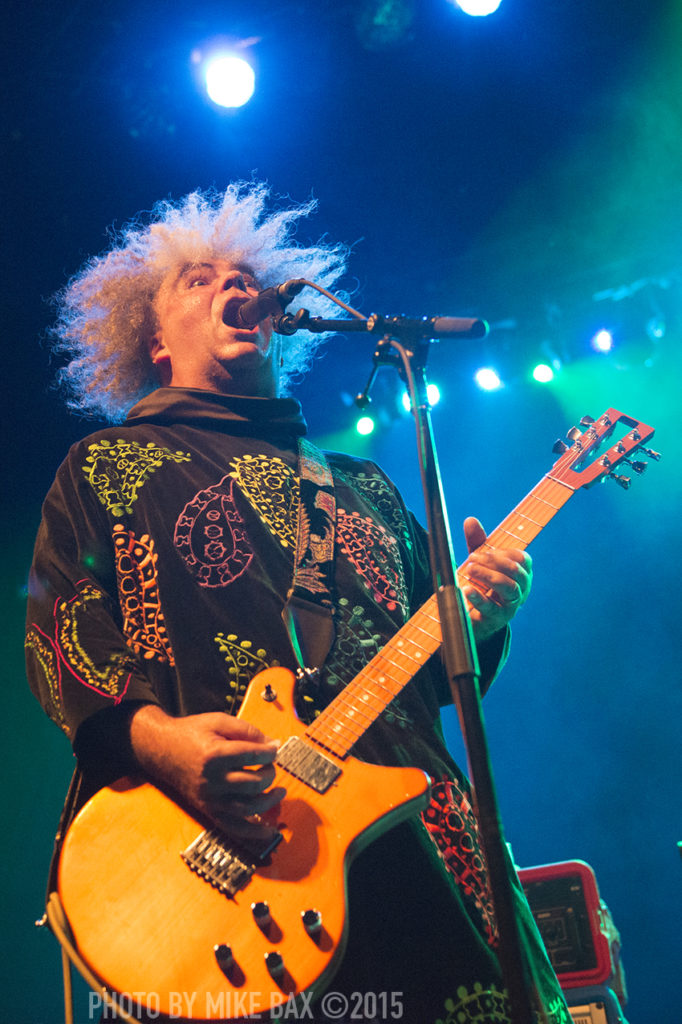 There’s really NOTHING like a Melvins’ live experience. Nothing! Regular members’ guitarist/vocalist Buzz Osborne and drummer/vocalist Dale Crover tend to tour with a rotating bassist, and Butthole Surfers’ Jeff Pinkus fills that position on the duration of this tour. Pinkus and Butthole Surfers guitarist Paul Leary collaborated with Osborne and Crover on the Hold It In album.

Full disclosure here… I’m an occasional Melvins listener. I own a few albums from the late 1990s, and their last three releases. Quite frankly, the Melvins are a band I prefer seeing live. They deliver an astonishing display of musical power every time I get to witness them, this show was no exception. Buzz’s incredible guitaring and vocals cast against Dale Crover’s pummelling drums are a genuine thing of beauty. While most would cite kit men like Dave Grohl or Neil Peart as their favourite drummers, I’d put Crover high on my list. I’ve never seen the guy phone it in. Crover gives 110% every show he plays, and he does it with an apparent ease that is almost annoying to behold – It’s a ‘How can this guy be this good’ sort of vibe that makes me shake my head every time I get to see him perform!!

Walking through the doors to the Danforth Music Hall, the Melvins’ merchandise booth boasted one single T-shirt (of the classic Stoner Witch artwork) available in extra large only, an assortment of obscure vinyl full lengths and seven inch singles along with an assortment of hand drawn 11×14 inch Brian Walsby drawings available for $25 each. These Walsby drawings boasted reproductions of classic Black Flag albums (most of them being variations of the classic Police Story visual) along with an assortment of Nirvana caricatures complete with Walsby’s social commentary on the recent Kurt Cobain: Montage of Heck ‘documentary’.

Congested traffic saw me arrive later than I’d have preferred. Unfortunately, I missed my photo opportunity with Mexican garage three-piece Le Butcherettes. Vocalist/guitarist/pianist Teri Gender Bender comes across like a blend of the best elements of Juliette Lewis and Iggy Pop. I know absolutely nothing about The Buthcerettes recorded material, but this marks the second time I’ve seen them live, and if nothing else I’d have to describe them as both engaging and entertaining. Gender Bender stood side stage and swayed about to the majority of Melvins’ live set, strutting on stage during ‘Fascists Eat Donuts’ and singing along with Buzz Osborne. Bender then writhed about on stage for a chunk of the song eventually winding up behind Jeff Pinkus with her arms out to her sides, stomping her foot in an almost contorted fashion as the song (and Melvin’s set) came to its conclusion.

The Melvins walked onstage (after a remixed version of ‘Sweet Leaf’ by Black Sabbath blared over the PA) and launched into ‘Hag Me’. The sound was clean. The riffs were pummelling. The drumming utterly mind-blowing. And things never really let up from this point onwards, which really is part and parcel for a Melvins performance. Donning one of his signature muumuu’s (this one all black with an assortment of coloured paisleys) along with his signature Sideshow Bob hairstyle, Buzz Osborne was in top form. There were plenty of snarls and head-banging during the set as he wrung the notes out of his guitar. As Osborne and Pinkus strode up to the microphones on each side of the stage, put their guitars behind their backs and performed, in tandem, the vocal breakdowns that construct the majority of ‘The Waterglass’, the stage presence of the Melvins quite simply could not be denied. And this was only two songs in.

The band worked its way through ninety minutes of material that touched on a few covers, some of which were Butthole Surfers tracks, never letting up on the Toronto audience. If you’ve not seen The Melvins before, do yourself a favour and go. They are a band ANY music fan needs to witness at least once.

As the show ended and Dale Crover slammed his drum sticks down in one final moment of pure showmanship, I knew two things for certain: I’d just seen something really special, and that I wanted to see it again. While I can pick NO bones about this evening’s show, a part of me wanted to make the drive to London the following night to see the band play Call The Office, a room 1/4 the size of the Danforth. THAT performance would have been something amazing to see. My photos would pale compared to what I got at the Danforth, so I’ll just shut up now and leave you with a few images from the Toronto performance.

This is the setlist the band has been adhering to on this tour for the most part. If there are any discrepancies with it, please post on this link and let me know what I’ve gotten wrong, and I’ll correct it.