“I’m Louise Burns and these are my young mopes,” Vancouver singer/songwriter Louise Burns said as she took to the stage.

She managed to attract a good-sized crowd and despite being in the dreaded, “First acts on” time slot and the area near Handlebar’s tiny stage was nearly full by the time her set ended.

Burns music has a delicious, psychedelia-tinged retro sound. Her powerful vocals are reminiscent of both Jenny Lewis and even Aimee Mann, particularly on one dark, 80’s-influenced number. Listening to her dark and almost gothic music, it seems hard to believe that she was a member of teen-girl pop-punk band Lillix at one time.

She also has a commanding stage presence and the harmonies between she and her bandmates were impeccable.

They even brought a vaguely country feel to one of the songs at the opening of their set. Towards the end, they turned in a cover of The Sundays, ‘This is Where the Story Ends’, which was fitting given that a lot of the music had a definite Brit-pop feel to it.

Burns took the opportunity to unveil a couple new songs including ‘Pharaoh’, a slow number that had a 50’s-style drumbeat to it. The band played musical chairs with their instruments, frequently switching and the set ended with Burns on bass.

Though it mostly served as a chance for Burns to showcase her new material as well as tracks from her current release Midnight Mass, she went back to her first album, 2011’s Mellow Drama, for ‘Clean’.

She wrapped up her far too short set with a track that had a dream-pop feel to it. 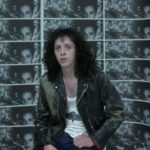