Philadelphia hard rock quartet, Everlit, consist of four solid musicians – Ryan Panfil (vocals), Jordan Panfil (bass), Jacob Castro (drums) and Anthony Michael (guitar). With their new EP, Renovate (pre-order here), due out on June 23rd, we thought it would be rad to chat with the guys about a multitude of different topics. From the band and their name, to music, gear, and tattoos, we got to know them a lot better.

For those not familiar with your band, can you tell us a little bit about yourselves?
Jordan Panfil: Well we’re a fun group…. Lots of joking and partying; just a very relaxed mood when we’re writing, touring, practicing, and hanging out. We also have a blast chatting with our fans online, so send us a message! We all grew up listening to hard rock, metal, and nu-metal stuff. I think if you’re a rock fan in general, you’ll really dig our music.

Your new EP Renovate is about to be released. Now that it is complete, how do you feel about it and what has been the response so far?
Ryan Panfil: We’re thrilled with it. We really couldn’t be happier. Taylor Larson did an amazing job both producing the tracks and mixing them. They sound amazing and the reaction we gotten from everyone who’s heard it is great. We just can’t wait for the EP to actually come out so the public can hear all 5 tracks.

What is your writing process like?
Jacob Castro: It’s different for every song but it’s a pretty laid back process. Sometimes we write from scratch at practice while jamming and sometimes one of us will bring a track with a verse and chorus to practice and we finish it from there. Vocals are generally Ryan and I writing the melodies and then perfecting the lyrics together. 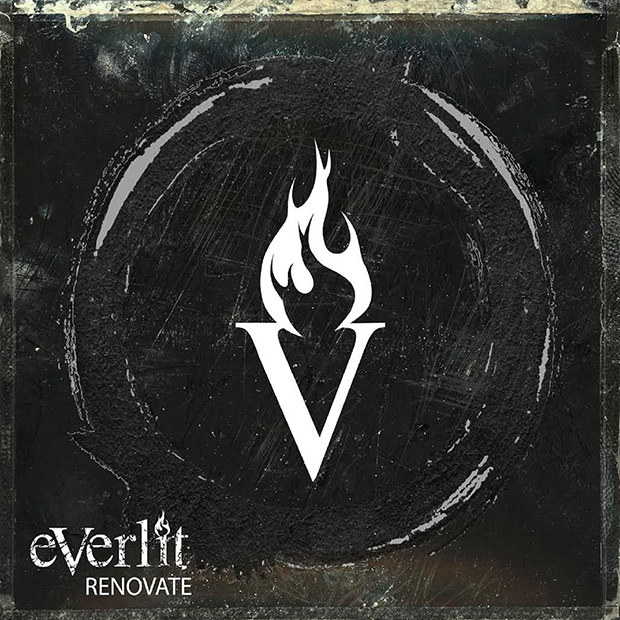 When you write, do you do so with the live setting in mind or do you write a song just for the song’s sake?
Anthony Michael: We try to keep the live show in mind, for sure. It’s normally once we’re in and fine-tuning that we start addressing things in each song that would make the live experience better.

Along those same lines, do you take advantage of technology and email riffs and parts back and forth, or do you get together in a room in a more traditional sense and write together?
Jordan Panfil: Yeah we absolutely take advantage of emailing ideas back and forth. Especially now as our own personal lives are getting more complicated. Being able to do that definitely makes writing while we’re all together go much smoother.

What’s the story behind the name of the band?
Ryan Panfil: Both the band name and EP title refer to our previous project Willpowerless, and what we were able to accomplish. Everlit basically just says that we’re fuelled by our past and we look to keep building on that.

What is the story behind the name of the new EP?
Ryan Panfil: “Renovate” just describes the transition from Willpowerless to Everlit. We have a new sound, new image, new line-up, etc. “Renovate” is a dope name and it describes what we just went through. It’s also something the public can relate to in their personal lives if they need to make changes to better themselves.

You have toured the U.S. It there anywhere you would like to go that you have not been, especially outside the U.S.?
Jacob Castro: I think we all really want to get over to the UK. From everything you see, it just seems like it would be a great experience. 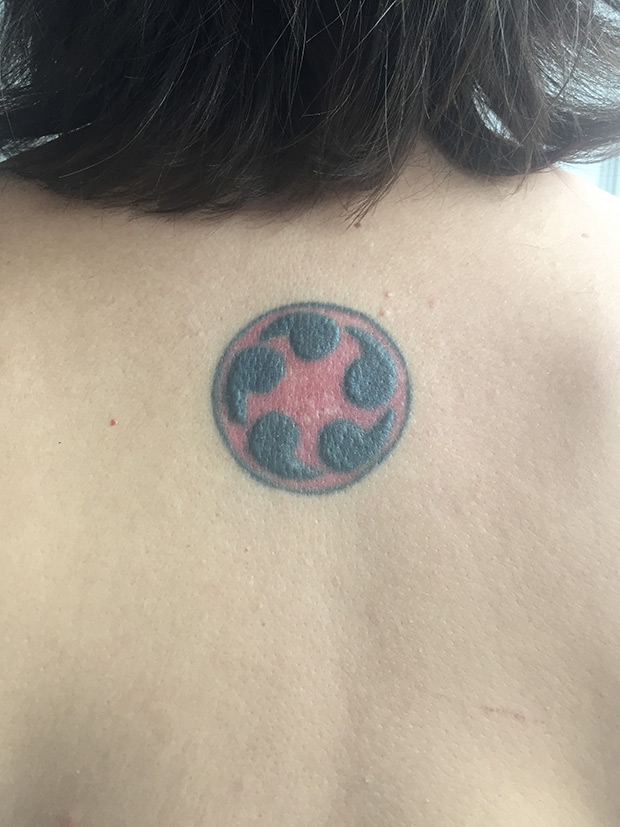 What do you think of the current state of the rock/metal world?
Anthony Michael: We’re actually pretty excited about it. Our style of music is making a comeback so we feel like that’s working in our favour. The only downside is where we’re from. Hard rock in Philadelphia is just not a big thing. Everyone here is into hipster alternative pop stuff. Hopefully we can help revive the scene here.

What’s the Rock scene like in Philadelphia? Do you receive a lot of support from your local scene and fans in general?
Jordan Panfil: Yeah like Anthony mentioned earlier, the Philly scene is a tough one. There is a market for it but it’s not anywhere close to where it should be. Our fans are amazing and there are a lot of them so when we headline shows, we get great support.

Do you have any rituals before you hit the stage? If so, what are they?
Ryan Panfil: Make sure you’ve got water and a stage beer! You’ll get thirsty up there!

Do you have any touring plans in support of the new recording?
Anthony Michael: We do. We’re actually working out the details right now so we hope to be announcing some dates shortly. Make sure you’re following us on social media so you don’t miss the announcement!

If you were stranded on a deserted island and could only take 3 CDs with you for eternity, assuming there was a solar powered CD player, what would they be?
Ryan Panfil: Deftones’ White Pony, Slipknot’s Slipknot and Asking Alexandria’s Reckless and Relentless.

Check out the song “Break Away” here.

What has been the most memorable moment of your career so far?
Jacob Castro: I think so far my favourite moment with these dudes is playing Trees in Dallas, TX with American Head Charge and Psychostick. That was an amazing show I’ll never forget!

What is the strangest thing that has happened to you on tour, or at one of your shows?
Jordan Panfil: Damn, strangest thing that happened on tour…. Well our boys in American Head Charge totally annihilated our last song on our last show on tour with them. We were playing “American Psycho” (as willpowerless) and they starting blasting us with silly string and breaking down our equipment as we were playing. They got Jake’s drums all the way down to just like his throne a snare and a cymbal. It was pretty absurd. Then they got everything set back up for the break down at the end. The crowd enjoyed it, LOL! So did we, those dudes are a fun group.

Give us your best “gear goes wrong” story.
Anthony Michael: We’ve had a few of them. In fact I think my very first show with these guys my wireless went for the very first song. Sound check everything’s good so we hit the intro and 1, 2, 3, 4 boom song comes in and not one guitar note comes out. Somehow the wireless went bad while I was standing there for 20 seconds. The worst part is these things just never happen at practice, only ever when you’re actually on stage. It’s quite annoying!

When, where and what was your first tattoo?
Ryan Panfil: My first tattoo was the Willpowerless tattoo. We all got one when we were kids so it might have actually been all of our first tattoos. It’s far from the best ink, but it will always be a good reminder for us. 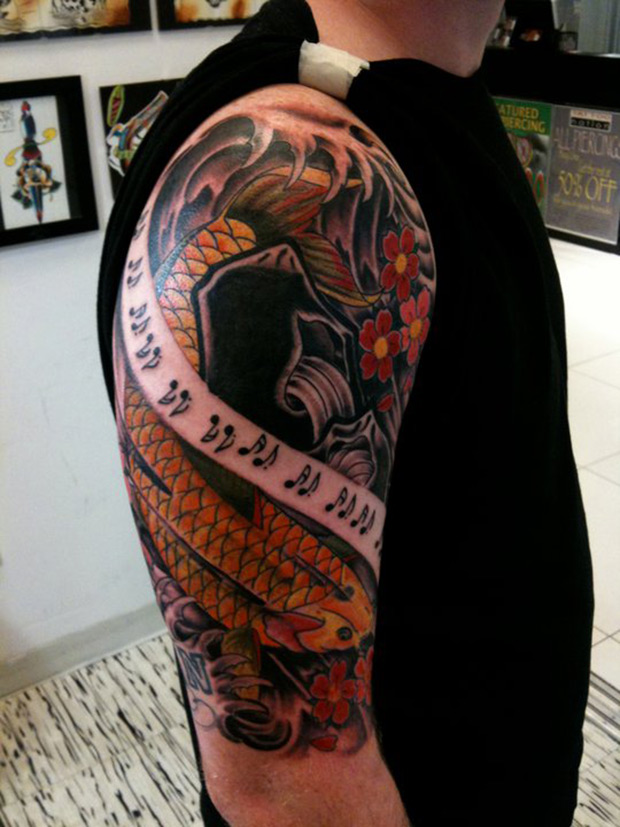 Do any of your tattoos have a particularly special meaning behind them? If so, do share man!
Jordan Panfil: I got this tattoo awhile back when we were still Willpowerless as well. This was dedicated to the meaning behind our song “Set the Sun” which was about the negative and positive things that motivate us to keep following our dream.

Do you have a specific shop or artist that you frequent (insert shameless plug time!)?
Jordan Panfil: I used to go to a dude named Monty at Tattoo Nation in NJ but that place closed and I can’t find him now. But, I just went and got ink from Jay Rill at the Ink Well in Southampton, PA. He did a kick-ass job so I’m sure I’ll be making more trips there.

Have you seen any fans with a band tattoo, anything crazy memorable?
Jacob Castro: No one to our knowledge has any Everlit ink yet, but there are a few people outside the band we know of that have Willpowerless tatts. Our buddy Oz got a pretty dope piece done with all the art from multiples albums we had. Shit was really cool!

If you HAD to get someone’s face tattooed on you, whose would it be and why?
Anthony Michael: Harrison Ford: I’d tell everyone to get off my plane.
Jordan Panfil: Samuel L Jackson: I’d tell everyone to get these snakes off my plane.
Ryan Panfil: Adriana Lima: So I can see her for the rest of my life. Cause she’s my favourite!
Jacob Castro: Frank Sinatra: Because I already have it! 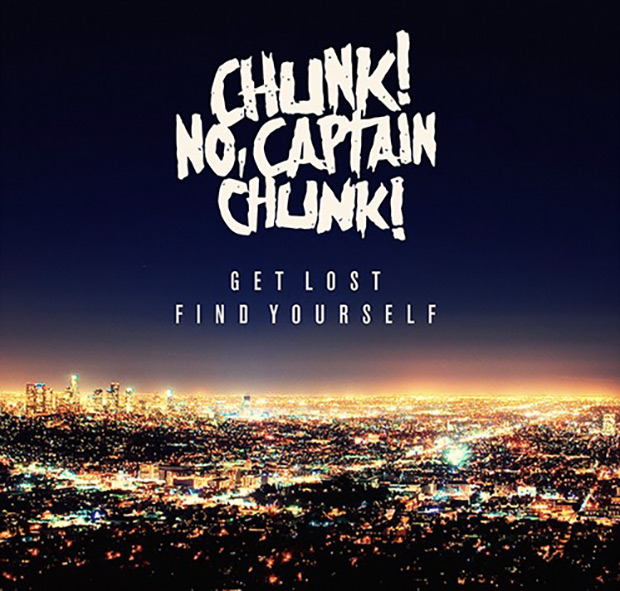 Chunk! No, Captain Chunk! – “Get Lost, Find Yourself” [Album Review] 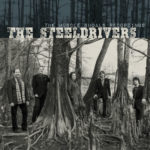