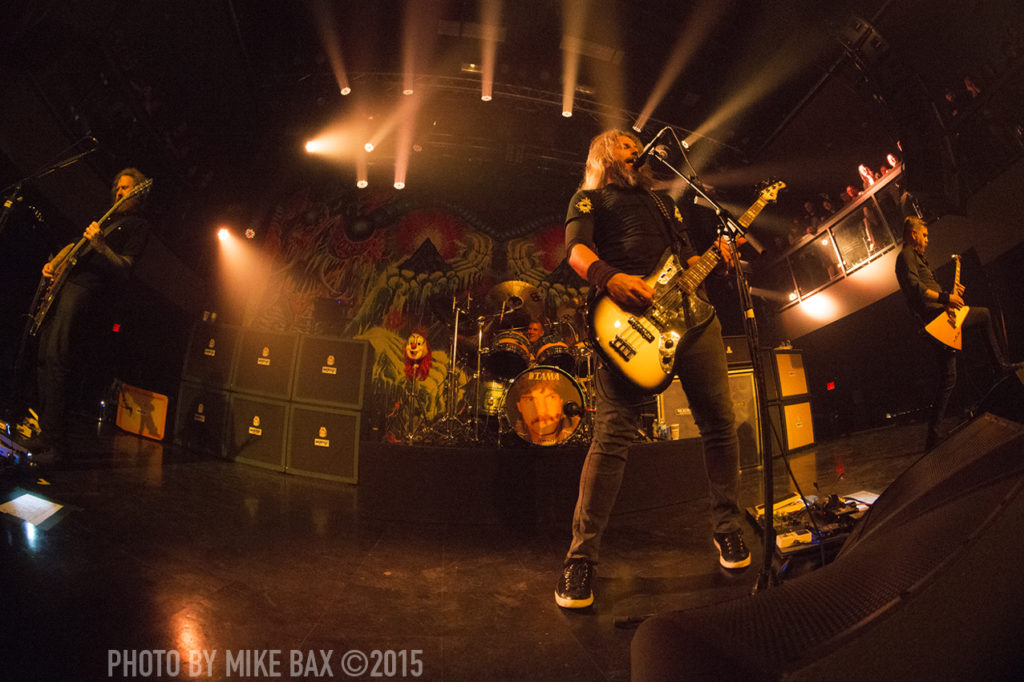 “Of all the shows on this six week tour, this one sold out first.”
Neil Fallon, Clutch

Yet another epic triple Mastodon bill, this one featuring a co-headlining set from Clutch, and my first look at Gothenburg’s Graveyard. Mastodon just may go down in history as a band hell-bent on surrounding themselves with great bands as a key component of their touring strategy. For $38, this show was a dictionary definition of no-brainer for me. Add in that the show was at the recently upgraded London Music Hall (better lights, sound and ambience than MOST venues along highway 401), there was no place I would have rather been on a Thursday night.

Graveyard was allotted 45 minutes to levy ten amazing songs from their catalog of three albums to a decent crowd of fans. There was a fair number of folks in attendance tonight to see Graveyard, and the band sold out of vinyl minutes after the doors to the venue opened. If you’d never heard the band before, it only took their first two songs ‘Hisingen Blues’ and ‘Seven Seven’ to warm the audience to their incredible sound. Anyone with a love of seventies stadium rock need look no further than Graveyard for a nostalgic blast of retro-cool, as the band sound like an amalgamation of everything great from that era rolled up into one band. By the time ‘Shunken’ and ‘Uncomfortably Numb’ were played at the end of their set, fans in the room were cheering the band on like the main event.

When Clutch hit the stage, you couldn’t move within London Music Hall. I’ve never seen the venue this full before, and the epic singalongs to ‘The Regulator’ and ‘Electric Worry’ were worth the price of admission. As Neil Fallon commanded the stage (and the crowd) shaking his hands like some kind of stoner-rock faith healer, it became obvious a large portion of the London crowd were in the room for Clutch. And the band totally hit it out of the park. Clutch’s songs of dominating the world with rock n’ roll churned the crowd into a frenzy, with multiple bodies rising atop of the crowd and surfing towards the security rail in front of the band. Every time I see Clutch live I marvel at how well their material comes off live.

The crowd had thinned out by 10% for Mastodon. This was a bit of a loss for patrons, as passing on seeing Mastodon is like turning down a rock n’ roll sure-thing. That said, the slight amount of breathing room in the venue was truly welcome. Some early sound issues on Bill’s side of the stage were quickly remedied and Mastodon treated London to a slathering of some of their finest material. For me, the inclusion of ‘The Czar’ made the night, but this song is hardly what I’d call the pinnacle of everyone’s Mastodon wish-lists. ‘Blasteroid’, ‘Aqua Dementia’, ‘Black Tongue’ and ‘Crystal Skull’ all went down exceptionally well.

Brent Hinds smashed the base of his V-neck guitar against his thighs during the crescendo of ‘Bladecatcher’ to good effect. He strode out on stage with a lovely double necked guitar for the entirety of ‘The Czar’. Troy Sanders took the time to thank the London crowd for making them feel so welcome for their first time in town. At the conclusion of ‘The Czar’, Brann Dailor walked up to the main microphone, thanked everyone again, and tossed a bunch of drumsticks into the crowd.

I’ve seen Mastodon more times than I care to admit. This wasn’t their best performance, but it was FAR from their worst. It was obvious that the band was having a good time playing to a capacity crowd in a fresh city, closing an incredible evening of music from two equally impressive bands.