Newly minted indie/pop superstars Walk The Moon bobbed and weaved their way into the hearts of the SOLD OUT crowd at The Danforth Music Hall this past Wednesday night.  From the opening notes, the band had the crowd bouncing to their energetic brand of post-millennial new wave.  Armed with charismatic front man Nicholas Petricca, WTM are out to conquer the world with pounding beats, lush electro and solid harmonies.  With heavy weight talk shows Fallon and Kimmel under their belt and multiple genre chart climbing hits in the catalog, the band is kicking ass and taking names.

The Ohio based ensemble pulled material from all three of their albums, with the bulk coming from their newest release Talking Is Hard.  It’s difficult not to make parallels to bands from the 80’s when discussing WTM.  It seems they have taken the soul of that decade and distilled it into their own flavour.  WTM joins other bands like Imagine Dragons, with a penchant for heavy percussion, adding drums about the stage for that extra punch.

Petricca worked the crowd like a seasoned veteran, with hypnotic dancing like Jim Morrison, teasing the front rows with stage diving attempts, and shaking outstretched hands.   Bassist Kevin Ray and guitarist Eli Maiman were equally at home playing backup to the keyboard heavy material like “Up 2 U”, as well as jumping right out front with bangers like “I Can Lift A Car” and “Tightrope”.  Drummer Sean Waugaman was a workhorse behind the kit, keeping the room in the air all night.

The main set finished up with their megahit “Shut Up and Dance”, which was clearly the fan favourite.  After a short break the band returned and slipped into the familiar piano intro to The Killers “All These Things I’ve Done” complete with the crowd chanting the iconic lines “I got soul, but I’m not a soldier” over and over.  WTM wore the Killers suit very well.  Their 90-minute set wrapped up with “Anna Sun” from their debut album.

The 1500 capacity of the Danforth venue might not be enough to contain this storm next time around. 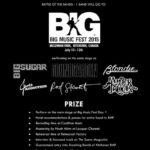