In early September of 2014, John Mann, lead singer of Spirit of the West, posted a message on his blog to his fans. At the age of 51, he announced that he has early-onset Alzheimer’s disease.

On April 29 at the Horseshoe Tavern in Toronto, the Alzheimer Society of Toronto is hosting a concert in support of those living with Alzheimer’s disease or other forms of dementia. Tickets are available for $25 (plus service charges) by visiting musicformemoryproject.org. As a bonus, concert-goers who donate an iPod Shuffle – old or new – will receive a limited edition concert gift.

Alan Cross, of The Edge and History of New Music, will be hosting this memorable night of live music with confirmed artists to date: John Mann, Molly Johnson,Royal Wood, Andy Maize and Josh Finlayson from Skydiggers, Tom Wilson, Kevin Kane plus surprise guests.  On behalf of the Alzheimer Society, the event is produced by Brian Hetherman, Cerberus Management and Consulting.

Alzheimer’s is a progressive, degenerative, and fatal disease that affects the brain. It is the most common form of dementia. It affects both men and women, regardless of race, religion, or socio-economic background. It is not a normal part of aging. And, no one is immune.

And, while we may associate the disease with older adults, it is sadly becoming more common in younger men and women. In addition to John Mann, two more famous musicians with Alzheimer’s have also made headlines: AC/DC’s Malcolm Young and Country legend Glen Campbell.

Fortunately for people with Alzheimer’s disease or other dementia, there is music. Music has been linked to beneficial effects on the brain stimulating it and helping people feel happy and alive. Music brings memories back to life.

Why an iPod Shuffle? No display screen and simple mechanical controls means that those living with Alzheimer’s disease can enjoy the music they once loved without visual distraction, which can be confusing or distressing.

ABOUT THE ALZHEIMER SOCIETY OF TORONTO
The Alzheimer Society of Toronto offers information and education to people with dementia, their families and their caregivers. Our mission is to increase public awareness of dementia, to promote research, and to advocate for services that respect the dignity of the individual. 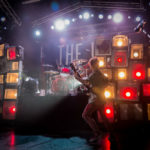