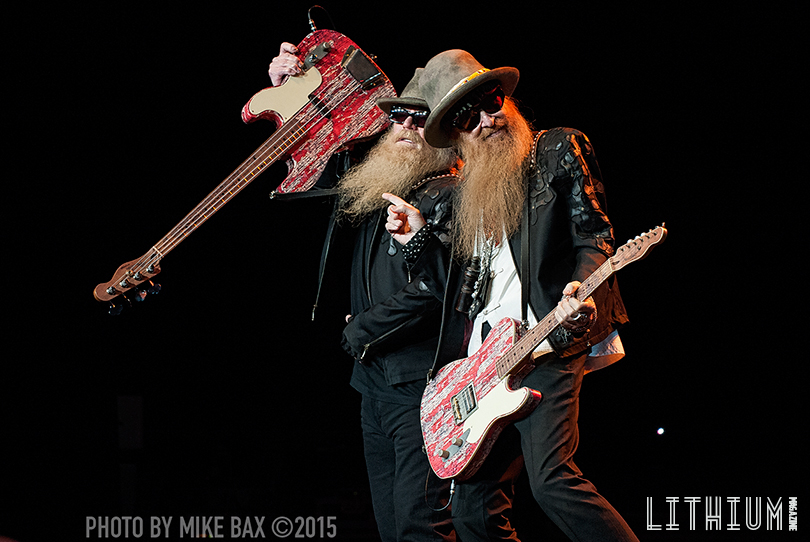 With over 40 years of recordings and touring behind them, Billy Gibbons (guitar) Dusty Hill (bass guitar) and Frank Beard (drums), the three long-time members of ZZ Top can easily pack a room with screaming fans. The three-piece band, with 15 albums of material to draw from, walked out in front of a full room of fans at Casino Rama and popped out ninety minutes worth of wonderful songs from every era of their lengthy career. And they did it with an apparent ease.

Billy Gibbons, the appointed ZZ Top ‘MC’, addressed the crowd numerous times throughout their performance on this evening. “We can do anything we want. We’re in the casinooooh.” ZZ Top performed on a bare bones stage that featured two microphone stands (for Billy and Dusty) that replicated the exhaust pipes of a tricked up muscle car, and Frank Beard’s funky drum kit (a tribal looking motif that had two Aztek looking skulls with glowing mouths facing towards the audience, to the left and right of the bass drums. 2 LED screens sat aside Beard’s drum kit showcasing old and new visuals to accompany each song as the band performed them.

Performing with heavily weathered matching guitars, Billy Gibbons and Dusty Hill have somehow managed to convey a timelessness as performers. Perhaps it’s the hats, dark sunglasses and beards. These guys look like they’ve hardly aged at all since their popular videos of the mid-1980s.

As ZZ Top delivered song after song of old and new material, I found myself squinting at them, TRYING to see them as the 65 year old men that all actually are. Frank Beard (sans hat, sunglasses and beard) is the band member who actually looks more his age, and HE is showing NO signs of easing up behind the kit. His wonderful percussion was even more impressive live than it is on the ZZ Top albums we all love and cherish so much.

ZZ Top performed a stunning rendition of Foxy Lady by Jimi Hendrix, complete with a tasteful black and white portrait of Jimi on the LED screens, with rotating colour glowing behind the graphic of Jimi. After performing the Hendrix cover, Gibbons piped up with: “Would you mind if we played some blues? I’m talking about those low down dirty blues now. Can you take it??”

After some guitar strumming and teasing another cover (Muddy Waters), Gibbons stopped the song and said that it had to sound “Looowerrrr”. We then got our second cover of the evening with “Catfish Blues” by the inimitable Muddy Waters, delivered with a panache that only ZZ Top could pull off. Even with their sterling repertoire of original songs, I have to say I enjoyed these covers immensely.

Of course, tracks like ‘Got Me Under Pressure,’ ‘Gimme All Your Lovin,’ ‘Cheap Sunglasses,’ ‘Sharp Dressed Man’ and ‘Legs’ were the popular tracks of the evening, being the songs that the band became massive back in the 1980s. Gibbons flipped his guitar around to show off a handwritten BEER sign towards the end of ‘Cheap Sunglasses’. Both ‘Sharp Dressed Man’ and ‘Legs’ had the band walk on stage with the white fuzzy guitars utilized to maximum effect in the popular videos for the songs.

The encore of ‘La Grange’ and ‘Tush,’ with the extended bluesy jam in between the song, was truly excellent. If I had to pick a favourite song from ZZ Top, it would be ‘La Grange’ and I was genuinely happy to hear it live.

I wanted to hear ‘Just Got Paid’ this evening, and was saddened that it wasn’t played. That said, the songs I did get to hear all sounded great. I personally could have done with another half hour of material, but this evening was about quality over quantity. I can’t really complain too loudly after seeing such a fine live performance from a veteran rock n roll band.