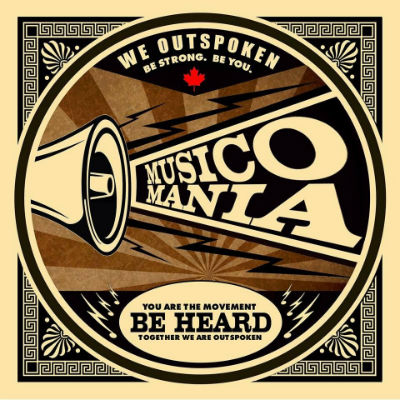 Music is all about being honest and creative when delivering a message within the lyrics. Toronto punk rockers We Outspoken are all about being bold enough to speak their mind and living life to the fullest. Their recent EP Musicomania is full of authentic, edgy and energetic tracks that still demonstrate what being “outspoken” is really about.

The band isn’t just a band, they are a business. They created their own label and management company called Outspoken Entertainment and have used their good business prospective to share valuable lessons, one being “be strong, be you” which is written on the album cover.

The band is made up of 4 members Anthony (lead vocals/guitar), Lex (drums, percussion), Chris (bass) and Joe (guitar). They have spent countless hours these past years writing, recording, touring and performing non-stop, aiming to find their sound and to be heard.

The EP features electric guitar power chords, deep bass lines, energetic drumming and vibrant beats found in tracks like “It’s Always Me” and “On Fire”. When you think of punk rock bands you usually think of Green Day, Blink-182 and more.  As such, a Green Day type of influence shines through on “Something From Nothing” with catchy lyrics such as: “There’s a pulse in my head that’s beating, there’s a fire on the drums, hit the streets, I’m anticipating, Let’s have me some fun.”

The band’s latest music video, “It’s Not Alright”, is the first single off Musicomania. The video seems to be an inside look at the band playing in their basement.  But is it?  If you pay close attention to the video you’ll notice newspapers on the walls of articles about the band, and as the camera moves around the room in circles, there are numerous different people playing the drums, the guitar, and singing the vocals. As a whole the video is really original and impressive.

We Outspoken will begin touring in Brazil on March 5th and will end the tour with a show in Toronto March 24th. Be sure to check out their music video and their 5-track EP Musicomania, you won’t regret it.