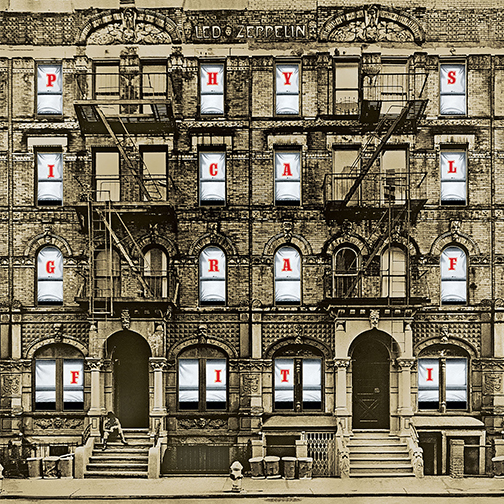 Perfection, Reissued. Almost 40 years to the date of its original release.

As a teen, many drunken nights were spent debating the long standing question: “What’s the finest double album on the planet”. There are numerous weighty candidates from many different bands. Amongst my friends, the two albums that always came out on top were Pink Floyd: The Wall and Led Zeppelin: Physical Graffiti. While both albums are unique and wonderful, I always deferred to Physical Graffiti, an album I have yet to tire of hearing. If Led Zeppelin could get it together and tour again, I’d want to hear this entire album live. All of it.

The thing I’ve always found amazing about Physical Graffiti is that it was a body of work fleshed out at a time when John Paul Jones was close to splitting with the band. The quartet went into the studio too quickly after the Houses Of The Holy tour and wound up embittered, leaving the studio with some bad feelings and not a lot of new material. A year later, upon regrouping at Headley Grange (rehearsal space), they quickly wound up with eight strong songs clocking in at 55 minutes. In 1974, 55 minutes was pushing the limitations of a single platter vinyl release, and the band looked to their back catalog for more content. By mining elements from their jam sessions from the past four years, the band managed to get enough material together for a double album, filling out what would become Physical Graffiti with eclectic, yet effective material that made for their finest commercial release. That they pulled it together out of studio leftovers is a testament to the talent behind the four men in Led Zeppelin.

Physical Graffiti has often gone under scrutiny, rife with audio blemishes (which have NOT been cleaned up, thank God) that seemed to magically add to the recordings’ appeal, the album would take some jabs for being too rough in places. Songs like ‘The Rover’ and ‘Houses Of The Holy’ still contain some of the tiny background flaws that are now stamped into the songs’ history so permanently, it would be foolish to try and clean them up.

Physical Graffiti contains some of Zeppelin’s finest hard-rock moments, some of their funkiest moments, and some of the band’s most explorative moments. The fact that they were trying stylistically new things made the inclusion of songs like “Down By The Seaside” and “Bron-Yr-Aur” work to their advantage. This could have very easily been the collection of eight great songs with seven weak, old, filler songs. It wasn’t. Physical Graffiti became the band’s swan song (sorry), making it their recording session to beat for albums to come.

The Easter Egg on this Reissue, as with all of the past Zeppelin reissues, is the inclusion of alternate takes and rough cuts of some of the album’s songs. None of these alternate versions are going to knock anyone for a loop. They are wonderful to hear, to be sure, but they aren’t ever going to replace the material that was put forward on Physical Graffiti’s initial release.

Considering that Physical Graffiti is a double album that was FORGED on filler, it’s curious that we now get to hear some bona fide filler by way of a Third disc of material: ‘Brandy & Coke’ (Trampled Under Foot – Initial Rough Mix), ‘Sick Again’ (Early Version), ‘In My Time Of Dying’ (Initial Rough Mix), ‘Houses Of The Holy’ (Rough Mix With Overdubs), ‘Everybody Makes It Through’ (In The Light Early Version/In Transit), ‘Boogie With Stu’ (Sunset Sound Mix) and ‘Driving Through Kashmir’ (Kashmir Rough Orchestra Mix).

Most of these songs serve as a look into the creative process for Zeppelin; songs with more prominence on the vocals and less on the guitars, and vice versa. The only real deviation is ‘Everybody Makes It Through’, an early version of ‘In The Light’ that sounds too similar to ‘Stairway to Heaven’ in the chorus. For this alone, it was likely migrated into the version we have been enjoying for 40 years.

The reissue packaging, especially on the vinyl deluxe version, is a real thing of beauty. Some wonderful photography is included, along with the original die-cutting that made the 1975 versions of the album so amazing to begin with.