At the Rickshaw Theatre

Karma to Burn is one of the most notorious names in heavy metal and stoner rock, pushing their brand of instrumental audio firepower around the world since 1993.  They’ve taken their show across the globe with fellow road warriors Monster Magnet and Corrosion of Conformity and have played some of the biggest rock festivals in the world including South By Southwest, Hellfest, Roadburn and Duna Jam.

Lithium Magazine was afforded the chance to sit down with lead songwriter and guitarist Will Mecum and drummer Evan Devine, to hear what it’s like to be inside the cockpit of the musical vessel the band has used to create a twenty year musical legacy.

Will: Basically what happened with Arch Stanton was we have an artist that we use quite a bit for a lot of posters and album work. He asked, “What kind of theme do you want for the new record cover?” He really likes drawing the Goateneer, or that’s what we call it [the infamous horned goat-like beast the band uses as part of their logo], so he wants the Goateneer.  So we decided on a civil war theme – no one wins, you split sides, mow down the middle, you know? Johnny Rebs on one side, the Union is on the other side. So I’ve got that in my head for this Civil War theme for the artwork, I’ve got it in my head about the title, also there’s a small sample at the end of the record [taken from the infamous spaghetti Western “The Good, the Bad & the Ugly]. It wasn’t really a concept, it was really one of those things that gets in your head and you kind of want to run with it.

Will: Yeah, yeah, and I can’t say that the music reflects on Civil War but we didn’t really go out of our way to create a theme for it. It’s kind of like dominoes, it all fell together pretty.

Alex: What are some of your biggest influences outside of music?

Will: My father telling me I suck. (Laughs) That’s all I got.

Evan: There are a lot.

Alex: Because I noticed that you use a lot of heavy imagery and artwork.

Will: Making shit? Have you been smokin’?

Alex: Who are some of your favorite visual artists?

Will: Definitely movies. We watch a lot of movies. Being the soundtrack to a movie is something we’ve always talked about and would be cool but we’ve never done it. We’ve played in front of movies before, which was pretty fun.

Alex: Oh really? Which ones?

(Evan, Will and Alex laugh)

Evan: It was fun; these chicks were dancing to it.

Alex: What are some of your favorite movies that get you in the zone and make you want to pick up your instruments?

Will: My side project band a few years back had a song “Snake Plissken: I Thought You Were Dead”. ‘Escape From New York’ is amazing. Any kind of John Carpenter stuff.

Evan: I was just gonna say ‘The Road Warrior’. That one really gets me going.

Alex: How can it not? A man, his mutt, and his motor vehicle – what more could you want?

Will: Of course we already touched on it, but some classic westerns. Some good westerns out there, some really fucking shitty ones too! (Laughs) I really hate the campy 40’s and 50’s westerns. When the anti-hero was born, that’s when the Western started to get good. I’ve got nothing against John Wayne, but he played in some really fucking dumbass cowboy films man.

Alex: Made for TV.

Will: Lately we’ve been watching a lot of ‘Matlock’.  (Laughs)

Alex: You guys continued to number all of the songs, which I thought was really cool because it’s a really cohesive way that ties the whole catalogue together. Is that to give it more of a novelistic approach, or is it just easier to write on the set list that way?

Will: I’ve answered this many a time. It’s no novelty, the only thing it is, is chronological order. That’s it. It’s just whatever order the songs are in. It’s not any Masonic bullshit behind this thing, it’s all chronological, that’s all. I figured Mozart did it, so can we.

Alex: How did Arch Stanton continue to allow you guys to branch out not just individually, but sonically as a unit instead of making Appalachian Incantation 2 or something?

Evan: Because we just did what we wanted, there were no expectations, we just wrote some songs. That’s all we did.

Will: Kind of what he said, just cross your fingers and hope for the best. I thought we came out with a pretty decent record.

Alex: I found it was – I don’t want to say darker than the rest, but it definitely has its own atmosphere and vibe to it. It’s really refreshing to hear a band that doesn’t just put out one great record and then a shittier version of that every other year.

Will: Thank you very much.

Alex: What was the biggest challenge carrying on as an instrumental unit? Is it because you don’t have to deal with any of that rock star front-man bullshit?

Will: I am the front man! What’re you talking about? (Laughs)

Evan: All kinds of rock star bullshit too!

Will: A lot of people say there’s two roads to travel, the high road and the low road.  I think there’s three roads and there’s one where you have to get the machete out and chop all the goddamn trees and people’s heads off. That’s the road we chose.

Alex: What are the defining factors, outside of being an instrumental band, that allow Karma to Burn to stand alone and have a voice of its own after all these years?

Will: Did you ever wash dishes for a living?

Alex: Yeah, when I was a teenager.

Alex: I meant is it more in the songwriting, the musicianship, the attitude or philosophy and where it comes from?

Will: Well, I mean trust in yourself, you take whatever influences you have from the past and put it in the pot, stir it up and serve it up! 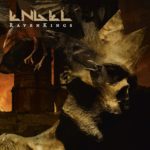 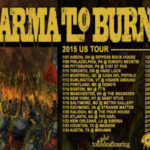