UK thrash metal titans Sylosis are set to release their fourth studio album, Dormant Heart, on January 12th via Nuclear Blast. Having toured with some of the biggest names in modern metal, Sylosis are moving up the ranks in the heavy music world, and are quickly becoming one of the most exciting bands in the scene. I recently spoke to vocalist and lead guitarist Josh Middleton about the new album’s influences, the recording process, and how the group’s sound has progressed.

Your new album Dormant Heart is due for release on 12th January. How do you feel about the final product, and are you happy with it?
Middleton: Yeah we’re incredibly happy with it. We paid attention to every little detail of the album. From the songwriting, to the production to the artwork. We want every element to be right. Something always ends up getting obsessed over that leads to the release date being pushed back a bit haha.

You recorded guitars and vocals at Wizard Sound Studios in your hometown of Reading in the UK. Did this make a big difference to the recording process overall, what with it being so close to home?
Middleton: It just makes it much quicker. We love working with Scott but I’ve been producing for so long now and have produced other bands that I’m confident of taking on the role. We know what kind of tones we want or what kind of performances so we can just blast it out. We deliberately didn’t spend too long on the actual recording to make sure it wasn’t too clinical.

Check out the song “Leech”

You’ve mentioned that the title of the album, Dormant Heart refers to “people going through life on autopilot and being one of the herd” and that “Sometimes there are catalysts that happen and change our perspective or consciousness….” What were the catalysts that changed your perspective, and brought you to this outlook?
Middleton: I guess so. It’s been a gradual thing over the last few years. I’m by no means suggesting that I’m perfect and an exception from that. Over the last few years it’s just something I’ve started to pay more attention to. Social, global or political issues. My girlfriend is a doctor of psychology and got me into meditation too. I don’t like bringing it up as I really want to avoid the common preachy/annoying stereotypes but I’ve been vegan for a few years. It opened my eyes to a lot of things, it lead me to pay more attention to all kinds of issues. Just rethinking everything in my daily life. Who profits, who loses, where your money really goes, etc. We aren’t going to become a political band though and I like to “dress” the lyrics up a bit and use imagery so it’s not obvious what I’m talking about all the time. I don’t want to force my opinions on people.

Over the past few years you’ve toured with the likes of Trivium, Lamb of God, Devil Driver, and Killswitch Engage. Has touring with bands like these had an impact on making this album at all?
Middleton: Probably not in a musical sense to be honest, but it’s definitely been really beneficial for the band and all of those guys were so accommodating and good to us. We don’t really write anything on the road so touring for us is all about the live shows, but when we get back home and write it’s a really separate headspace.

The huge thrashing riffs and soaring melodic choruses that you’d expect from a Sylosis album are ever present in Dormant Heart, however there’s something a bit darker and more menacing about this album when compared to previous endeavours. Would you say that as a band you have finally found your sound?
Middleton: I would say Monolith or even Edge Of The Earth were us finding our sound. I think now that we’ve established our sound, we feel like we can give each album it’s own character. This one is definitely darker and more menacing as you say. It’s a bit more doomy in terms of the vibe, but it doesn’t mean we’ll keep going in that direction. We’ll probably always have one foot in “our” sound and give each album it’s own distinct feel.

Your vocals on Dormant Heart are quite phenomenal, and they’ve been getting stronger with every release since Edge Of The Earth. How do you feel about the your vocal performance on this album?
Middleton: Thank you very much! It’s something that comes with time and experience, but I have definitely tried to push myself to improve, but it’s been quite a gradual learning curve as I had only been doing it a few months before I started doing it in Sylosis. I’m really proud of what I’ve done. It’s a lot more varied. 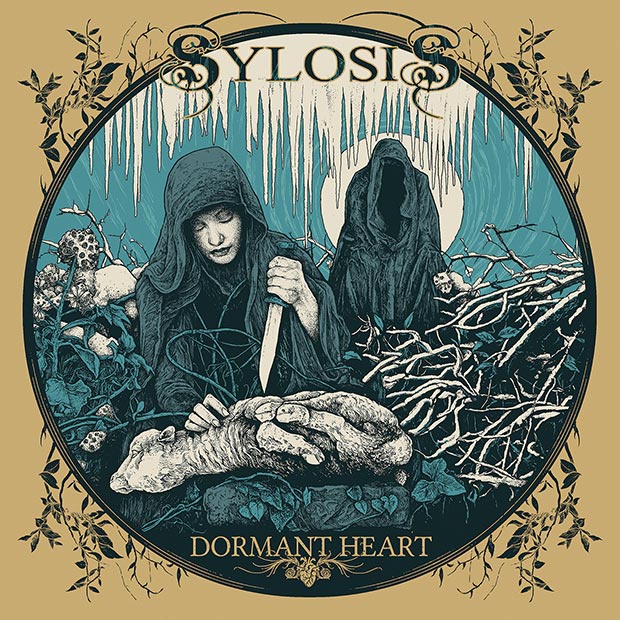 There’s a bigger doom/stoner metal presence on Dormant Heart in tracks such as “Victims and Pawns” and “Mercy”. Are there any other bands in particular that have influenced this side of your writing over recent years?
Middleton: It’s always been something we’ve been into for years. I’ve always loved bands like Crowbar and High on Fire, etc., we just weren’t sure how to incorporate it into our already broad range of influences, but I think those kind of riffs/parts fit in really well with what we do. Going for a more organic production helped bring those vibes out a bit more. In terms of newer bands I’m really into Pallbearer. Their last two albums are incredible.

The album closer, “Quiescent,” is a beautiful 9-minute-long prog outing. How was this track influenced, what were your thoughts when writing this track, and did you always plan on ending the album with a song like this?
Middleton: It’s really inspired by a lot of ’70s prog rock. Early Genesis and Pink Floyd, etc. Once we started writing it, we realised it wasn’t going to be a opening track, a single or even a mid-album track. We knew it would only work at the end of the album, but it still completely fits in with the dark feel of the album. Seeing as we knew it would be at the end of the album we could just keep building it up and not worry about how long it was. I think I’m most proud of this song out of any. Just from a songwriting perspective.

You’ve recently replaced drummer Rob Callard with Bleed From Within’s Ali Richardson, after he filled in on a string of dates whilst touring in Spring 2014. How has this change in lineup made a difference to the band in general?
Middleton: It’s breathed some new life and enthusiasm into the band. We parted on great terms with Rob and he’s a great drummer, but he lost a bit of drive for it I think. Ali lives and breathes drums. He’s constantly writing drum parts and teaches drums. He’s one of the best in the UK so we really lucked out. Really looking forward to seeing what he comes up with for the next album.

What more can we expect to see from Sylosis in the near future?
Middleton: We just aim to tour as much as possible for this album and continue to keep pushing ourselves with the writing. We’ll be doing a UK/European tour in early 2015, then a load of European festivals and hopefully back to the US before the end of the year.

Check out the song “Mercy”