We recently had the chance to chat with guitarist extraordinaire, Zoltán Báthory, founder and one of the main songwriters of Five Finger Death Punch. Báthory, who was named “Best Shredder” at the 2010 Golden Gods Awards, is the co-designer of a new Diamond Signature Amp Series as well as his own Diamond Series Signature Guitar line, the Halcyon ZB. We got some exclusive insight into these sick new pieces while Báthory was at NAMM 2015 with Jeff Diamant of Diamond Guitars and Amplification.

You are the co-designer of the Diamond Amp Series and now you have your own Signature Series Diamond Guitar. How did all that come about and what did the process involve?
Báthory: Well you know I have worked with Jeff Diamant for a while and we started with the amplifiers. I am very gear conscious and I never find what I need or just stumble into something and discover a piece of gear that I think is great and then integrate it into my sound. It has always been the other way around, I knew what I wanted and then I had to find the gear that could do what I want to hear. Whenever I work on something – I already know what I want the piece of gear to do, I just need to find a way to do it. So we sat down and had a conversation and I told him my needs, I am tuned to B with really heavy, heavy strings. I obviously have a certain sonic signature and needed an amplifier that could handle all of that. A lot of amplifiers fall apart with the low end being what it is and I needed the punch, the dynamics on the low frequencies at a full throttle volume and we were working on amplifiers that could do that and that is how the process started. 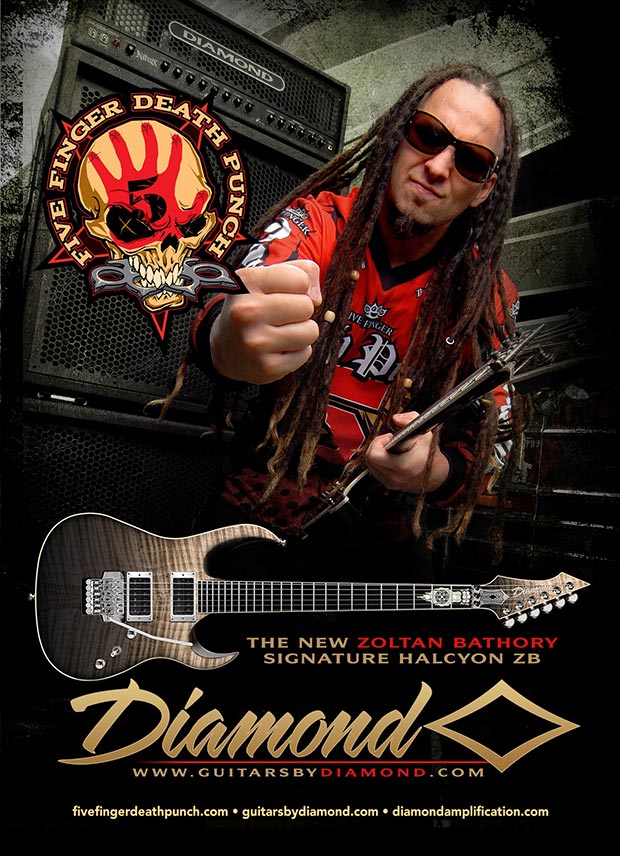 Then when it came to the guitar line, I used to make my living out of designing stuff in Europe and Jeff asked me to work with him on a guitar line. At the time I was endorsing another company and since he was my friend I could kind of lend my skills to help him. It was fun and I helped him design the shapes of a few models that became very successful. Basically it is a full circle for me because years later here I am going to work with him again using the Halcyon ZB signature series I designed in the first place.

What do you think differentiates this series of guitars and amps from other similar brands on the market today?
Báthory: Let’s talk about the amplifiers first. The Diamond Amplifiers are almost like having a hi-fi tube amplifier in a brute form if that makes any sense. The Diamond Amps have a fast response almost like solid state amps – which is important to me, but when I go for a solo I need that creamy tone only tube amps can give you. Grit and Texture are the things I always wanted from an amp, but with lightning fast response. Some amplifiers feel really good when you play lead and then when you switch to rhythm they feel mushy, lazy and soft.

If you take a solid state amp, it is right there under your fingertips whatever you hit it happens immediately, it is super-fast, but lacks that texture. This was my dilemma. I wanted to have both the speed and the soul. Obviously there are many good amplifiers on the market, but I could not find anything that would do exactly what I wanted. That’s what we aimed at with the Diamond amps, and now I have my own signature amp where we also built in a noise gate between the amplifier and the preamplifier, exactly where it should be you know. So there is complete silence until you hit it and it rips your face off. That is the dynamic I was looking for.

For the guitars I mostly use 24 fret standard strat shape, I did experiment with different kinds of shapes before, but I seem to always circle back to the more traditional shapes. It is a guitar and there are not too many shapes that you can go with. What started from a Strat shape and made it a little more aggressive, the head stock is a little bit bigger and therefore has more resonance. Pickup-wise I used to work with Seymour Duncan and I have tried other experimental stuff, but when I heard these pickups I was like, “holy shit,” so I am back to Seymour Duncan pickups again as well. This is a very balanced guitar.

For me it is about quality and value, many companies are making pretty good playable guitars – and others make excellent but unreasonably overpriced ones but you have to be an experienced guitar player to really cut through the jungle, know the difference and gauge the sweet spot. It was important to me, especially since it is a signature guitar, that when some kid grabs it off the shelf somewhere, the guitar they get has to be very, very close if not exactly the same as the one I am playing on stage. It is not quite fair if I have some custom shop guitar and the one they grab off the shelf is an imitation piece of crap and not even close.

Diamond has always been really really good with that, so the production models are really flawless. Another thing about the signature guitar, you know how a lot of guys put their name all over the guitar, I kind of didn’t want to do that so the only place you will really find my name is in the serial number where it says ZB and that is it. The guitar players will know but I didn’t feel I had to broadcast my name across it in 3 inch letters. The inlay of the guitar is basically a picture of my tattoo. So if you look at the guitar between the first and the third fret there is this Tibetan flame motif that matches the tattoo I have on my forearms so it is like a signature without being a signature, you know what I mean?

You mentioned it earlier, and I know you play quite an aggressive style of guitar, what kind of strings are you using?
Báthory: I use Heavy Core Strings from Dunlop. Right now I am playing gauges 13 through 66. Basically you have to have the heavy strings to keep the guitar stable when you are tuning that low; so they are not hanging like spaghetti. If you decide to tune like this, at first the strings will feel really heavy and it will take some time. I am playing baritone guitars and I have been tuning that way for 16 years so I am used to it. Plus I am a Judo player since I was around 7-8 years old so my grip is strong. It’s easy for me, but when people pick up my guitar they are like “what the hell.” Don’t worry though, the signature guitar will come set up with a standard set of strings, but it is designed to be able to handle the super-heavy strings if you wanna go that way.

Today when you play an electric guitar, for sure you have to have your vibe, your hands’ signature, but the actual amplified sound, the tone is just as important. Any musician that says otherwise is lying to himself, and generally real guitarists won’t say such a silly thing anyway. You do need good equipment. You need a guitar that sounds good to begin with, you need pickups that harness that sound precisely and you need an amplifier that can amplify the sound correctly without coloring it too much…. You start there, and from there now you can tweak it and find who you are sonically….

Check out the song “Wrong Side Of Heaven” 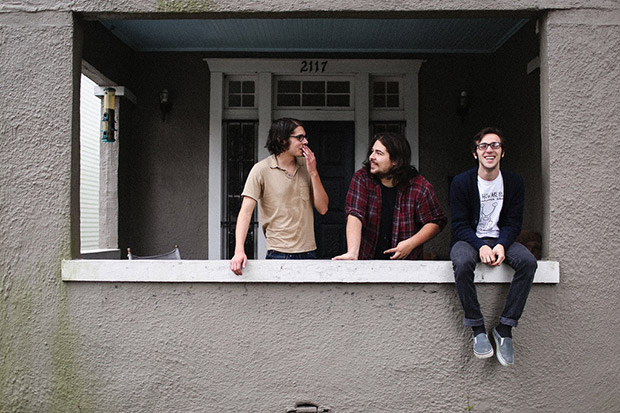