Since 2013, Parisian quintet Cowards have been peddling their violent blend of metallic hardcore and sludge to the masses and now, as they’re ready to unleash their newest album, the 10 track affair Rise To Infamy (out February 9, 2015), people better duck and cover ’cause this band is totally AMPED UP! The new offering was recorded from September 30th to October 31st at Studio Sainte-Marthe, Paris, with Francis Caste. We chatted with guitarist Adrien L to discern just how he’s able to get his sound so dark!

What one piece of gear do you use to obtain your signature sound?
Adrien: I’m not really comfortable talking about my signature sound considering the fact that my real only aim is to have maximum feedback available at all times, but I always use my Gibson ’83 tobacco sunburst LP custom.

What about it makes it so important to you?
Adrien: Being the shallow, narcissistic, self-centered guitar player that I am, I love this guitar for its looks – you can’t go wrong with a tobacco sunburst LP – plus it was made on the year I was born. It might also come from the fact that no other guitar I have owned or played feels more like my hands belong on it. 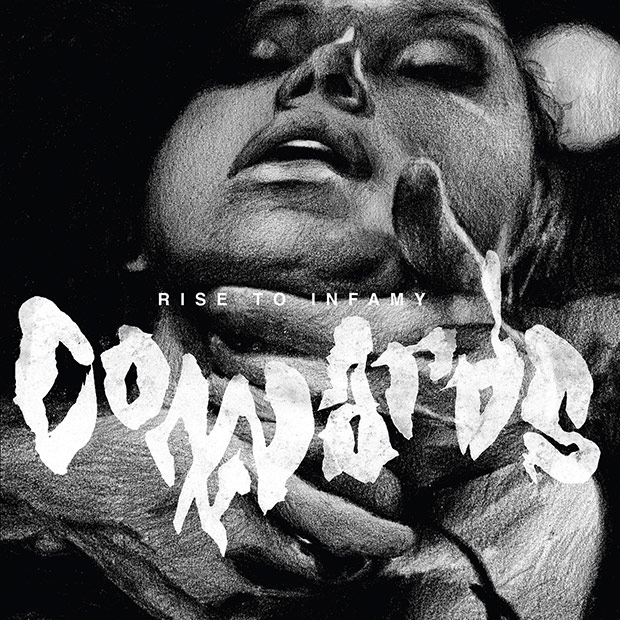 How was this gear used during the recording of your latest album?
Adrien: Quite a simple setup actually, plugged in a modded TS9, through my Rivera KH100 head and in two cabs, an Orange PPC412HP8 and a Randall Warhead 215.

How do you recreate your album (guitar/vocal/bass) tones in your live set?
Adrien: We never use gear we don’t own while recording, this way we have everything we need when playing live to at least try and recreate those tones. Once again, it’s often more about general chaos and sound of warfare, feedback running everywhere than really pinpointing the perfect EQs for everybody. As long as the bass lurks alongside the guitars properly and that the drums and vocals cut through. We’ve really always been more of a drum/bass band than a guitar oriented one. Don’t get me wrong, everything begins with the guitar riffs but what makes it good are the drums, bass and vocals, guitars are supposed to be more of a dirty topping on a rotten cake I guess. 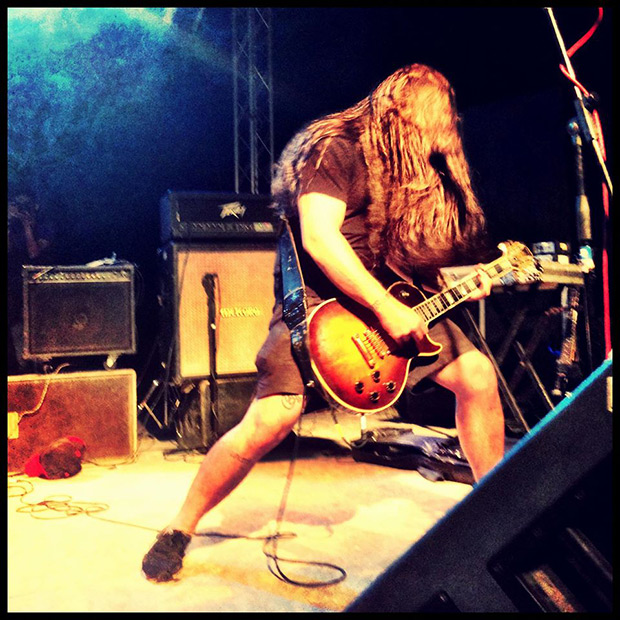 Give us your best “gear goes wrong” story.
Adrien: Ah. I just might have the best gear goes wrong story, although probably not the one you’d expect. Back in ’08 when I was still playing with Hangman’s Chair in Lille, we were all enjoying the aftershow at some guy’s recording studio. The party was really kicking and there was way too much of everything, we felt creative, I got my guitar from the van to record some tracks for a solo for that song we were doing but of course I was way beyond able to record anything decent.

So I had a flash of genius and decided on storing the guitar back in the van, safe. That was my second mistake, you guessed it, next morning, emerging from the haze of the night, my guitar was nowhere to be found and to this day I have no idea where I put it. My best bet is that I probably dropped it on the sidewalk and got back to the party… It’s a good thing that we brought a spare guitar (we usually never did) so we could finish the tour, but needless to say I felt like shit having abandoned my true guitar love in some hazy high I’ll never remember.

We went home and I bought a new guitar that I never liked as much as the LP and life went on… Until, a year and a half later, visiting the one pawnshop that I usually visited, I spot a very similar LP hanging from the wall. Two minutes to check it out, check the serial number that I had photographed back when I bought it and it was official, she had found her way back to me. A couple days of negotiation with the shop owner, exchanges of pictures etc. and my hands were back home at last. How lucky am I?

Check out the album ‘Rise To Infamy’