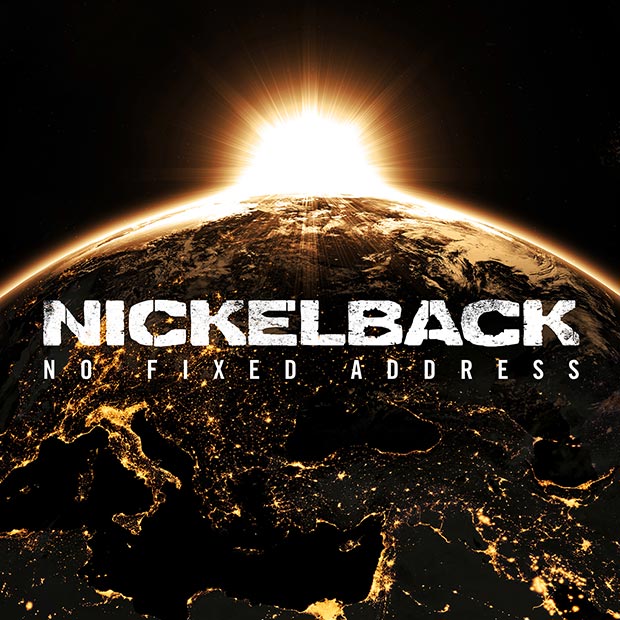 Bluurgh, let’s get it out of the way – “Chad Kroeger is a cunt,” “Nickelback sucks,” “Fuck Nickelback, they’re not rock” …blah, blah, fucking blah. You know what? Nickelback fans have heard it all before while Nickelback themselves could probably write a book with all the insults that have been levelled at the band during their career. Clearly not bothered one jot by the uproar they cause for no real reason, it hasn’t stopped Nickelback continuing to write big, massive-sounding, arena-filling rock anthems and, as a huge, booming riff kicks off No Fixed Address, they’re obviously not going to change.

Following their tried and tested formula, “Edge of a Revolution” is just their hit single “Rockstar” with different lyrics and, as Kroeger barks “same shit, different day,” you’ll find yourself nodding in agreement. Nickelback are no fools, they know exactly what helps them shift a shitload of records. It’s fist-pounding, pyrotechnic-laden anthems like “Edge of a Revolution” and it’s also big-sounding, smoochy rock ballads like “Satellite.” America will simply cream itself over stuff like this. Yes, in front of your mates you tough guys will probably do a little sick in your mouth at the thought of Chad Kroeger dancing around his bedroom but, at the same time, you’ll be there when they tour, swaying along with your partner in your $150 VIP seats because “she digs the band”. You know it, I know it and, most importantly, Nickelback knows it.

The thing about it all is that, while No Fixed Address is full of every rock cliché in the book, Nickelback do it so well and so effortlessly. Nickelback are no different to Bon Jovi, no different to Europe, no different to Poison, Motley Crue, Kiss. They’ve just put a modern twist on a rock formula that is catchy, simple, appeals to a mass audience and, when it comes to the base line, sells albums and puts bums on seats.

Yes, of course you’re going to hate it. You’ve hated Nickelback since you first had “How You Remind Me” rammed down your throat and your mate who thought “all rock music sounds the same” started to like “your music.” You’ve hated it because your mum fancies Chad Kroeger while your dad dreams of being him. No Fixed Address is no different. It’s got fun rock anthems, it’s got some stuff we can well do without, and it sounds exactly like a Nickelback record should.

Check out the song “Edge of a Revolution”