…And Justice For Art: A Look at Dan Seagrave and Zbigniew M. Bielak’s Latest Projects

Dan Seagrave and Zbigniew M. Bielak are two well-known artists that have noticeable generational, cultural and stylistic differences. Despite this, there’s a common denominator between them: both have lent their talents to the world of Heavy Metal. As a result, they’ve created iconic graphics that have become the visual representation of recordings by some of the world’s most revered extreme bands. So… what brings together Seagrave and Bielak to the pages of And Justice For Art? The answer to that is rather simple. Coincidentally, two of their most recent projects have caught our attention, so we contacted them to find out more!

Let’s start with Seagrave. The Toronto-based painter/illustrator/filmmaker, whose portfolio includes artworks for Morbid Angel, Suffocation, Pestilence, and more, just finished a hyper-detailed illustration titled “Origin’s Of Madness” for the new edition of Albert Mudrian’s now-mandatory-to-read book “Choosing Death: The Improbable History of Death Metal and Grindcore.” To celebrate such event, he’s currently offering a limited edition of fine prints (only 100 copies will be available) via his official site. Here’s what he said about the creation of this monolithic piece of art.

How did you become involved in the making of this new artwork for the second edition “Choosing Death” book?
Seagrave: I had been involved slightly in the first edition. Albert Mudrian, the author, had contacted me back then to ask for some input on my part in the Death Metal scene. So it was essentially a bit of an interview. This was my introduction to Albert. I’d not met him, however, until 2014 when we both attended the event called “Grimposium” in Montreal. I had actually asked Albert if I could tag on to his Decibel magazine tour for two days which were in Toronto and Montréal the following day, which he was happy to do.

So, after this event, we got communicating about the re-edition of the book. And the fact that there would be some additional material. Albert was interested in having artwork by myself that tapped into the essence of the work I had done in the original Death Metal scene. Not to copy anything or flaky reproduce the past, but something that felt like those covers. 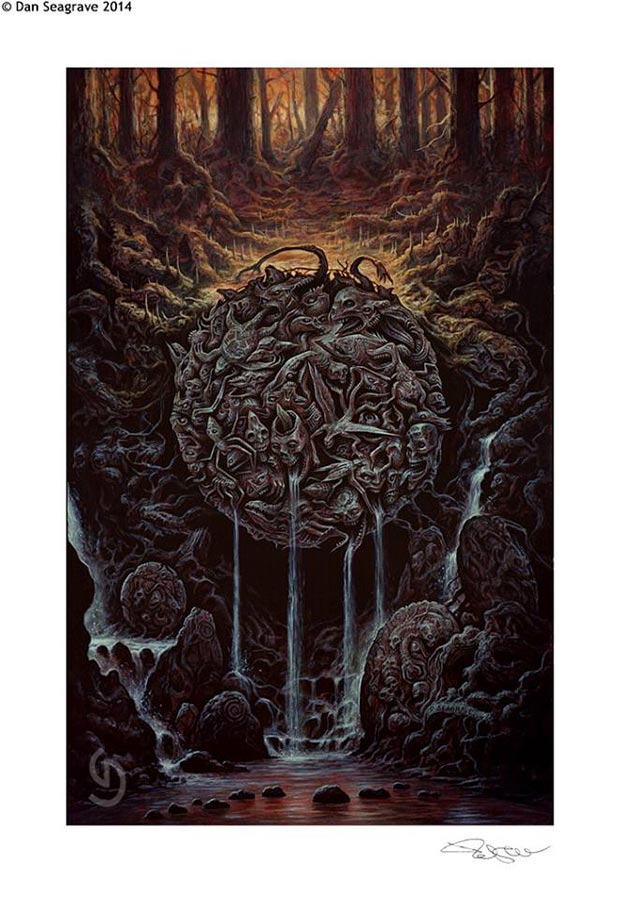 Were you presented with a briefing/concept/suggestions or you just came up with your own ideas for the artwork?
Seagrave: Albert pretty much left it at that. So really it was about creating a piece that I though would work, and feel like that era. I had been somewhat curious about re-visiting the Morbid Angel theme I created for Altars of Madness. Some how I’d thought about a follow up to that; that there was more to it. It seemed therefore like a strange opportunity to in fact do just that. So then it was about creating some kind of back story, and an idea of what this disk shaped tablet was.

“Origin’s Of Madness” explores that communion between different organic entities that is so characteristic of your work, but also seems to evoke not only the cover for “Altars Of Madness,” but also of Entombed’s Clandestine. Given the nature of the book it seems like a perfect fit. Could you elaborate about this?
Seagrave: Visually depicted then is a similar disk artifact, and held within that are these characters, as if carved out of stone, but I think more like petrified specimens, long trapped somehow by the force of this object, and worn down by much time creating that slightly shiny carbon-like fossilized feel. Around and below this main structure lay other similar but smaller disks, to elude to there being many of these tablets. I never meant this to be spherical. It’s mostly a flat disk, not perhaps unlike the roman carving of the ‘mouth of truth,’ or the Aztec calendar… The slight waterfalls and pooling water, the trees above and that sun set almost dusk time of day evoke the cover art from Clandestine. 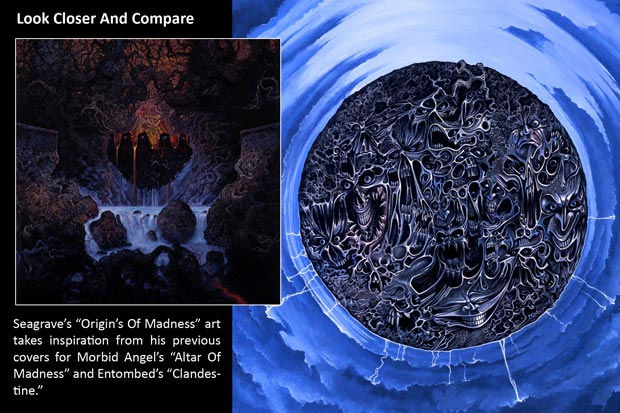 How long did it take you to paint this from sketching to finishing touches? What medium/techniques did you used?
Seagrave: I think it was around 2 weeks. I mainly stick with acrylic paint on board for most of my painting, as with this.

On the other side of the Atlantic, the Polish-born Zbigniew M. Bielak is set to release a sumptuous 2015 calendar that not only features some of his most emblematic artworks for Mayhem, Watain, Ghost, etc., but also contains a comprehensive listing of 2015 Metal events alongside with Catholic, Jewish, Muslim, Hindu & Buddhist holidays and observances.

This irreverent item contains a total twelve illustration sheets printed in gold and black with golden backpages on 300g paper and can be obtained via Season Of Mist Records. Bielak briefly commented, exclusively for And Justice For Art, about the genesis and eventual creation of this one-of-a-kind project.

Who came up with the idea of doing a calendar with your artwork and what inspired it?
Bielak: It was principally a child of need – I remember planning my Summer festival routine and always fell prey to time-managing chaos missing out on best ones in effect. So, the main idea was to put, at last, some order into that. I’m sure many music enthusiasts will find this first ever metalhead-oriented calendar handy. If not, there’s always some art to look at, some fresh, some revisited and less known. Also, a broad spectrum of multi-religious holidays and observances from Catholic to Islamic will serve for ultimately up-to-date sacrilegious vigilance, so dear to a Metal heart. 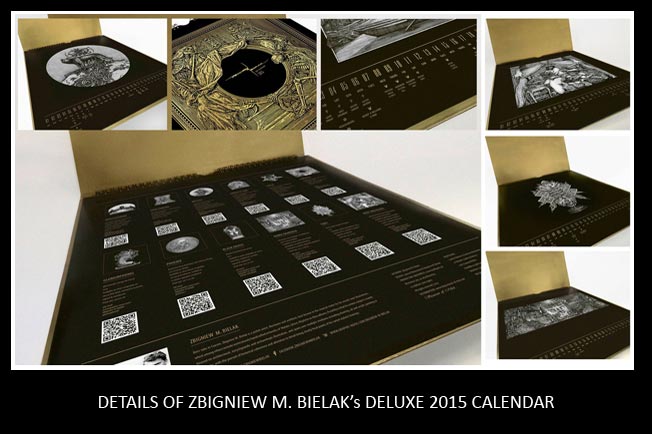 What criteria did you follow at the moment of choosing the artworks featured on the calendar?
Bielak: The idea, which came from my designer friend, was to compile artworks based on shape diversity – basic, striking forms that focus attention effectively.

This item will be sold via Season Of Mist Records. Why them?
Bielak: Season of Mist Records is marketing it. We are working with (owner) Michael Berberian on his amazing Graphic-Noise gallery initiative a lot so it was natural – he is THE man when it comes to art sensitivity in the scene. 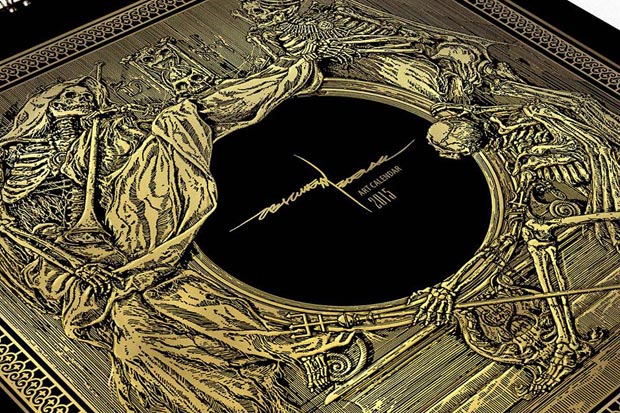 Can you give me some details about the making-of process? Do you feel proud of the finished result?
Bielak: Things are looking up now but it was an immense, pitfall-laced task to coordinate content and design, it was meant as an eye candy, so production process is a challenge – from embossed gold foil stamped cover to biblical gold-gilded edges. One should want to eat it. A meager diet but I hope it at least holds good balance between the practical and exquisite.