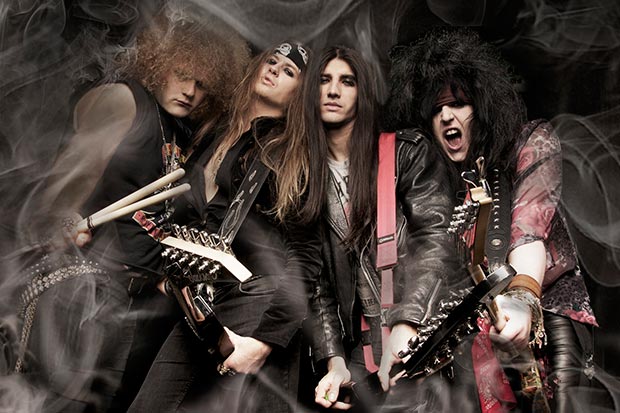 I recently had a chance to speak with the guys in the UK-based glam/sleaze rock act, Lovebite. The band, who are still gigging off their debut album, Lock ‘N’ Load, took a moment to answer some of our more down and dirty questions.

Tryx: Yeah, probably that, or starving to death locked in the Gibson factory.

KC Valentine: I’d want to be eaten by a shark… They’re the ocean’s top predator.

Mikey Toye: I’d do a sky-dive without a parachute.

Has a fan ever really pissed you off? What happened?
Jonny Sparks: To be honest no, our fans are awesome, but I did go to a local show a couple of months ago where the guitarist (who was wasted, was playing so badly) got heckled and punched the guy clean in the nose. I wouldn’t condone it myself, but it was the funniest thing I’ve ever seen!

What is the most fucked-up thing that’s happened to you as a musician?
Jonny Sparks: Had a chest infection that put me out of action for over 6 months.

Tryx: Yeah, I’ve got a broken wrist right now which sucks big time for a guitarist… Injuries are no joke, especially for musicians.

KC Valentine: I was in a car accident which left me injured and unable to play for weeks.

Check out the song “Separate Ways”

What scares the absolute shit out of you?
Jonny Sparks: That white alien thing from the film Cocoon.

Mikey Toye: Being dead or dying.

Have you ever been too wasted to play live?
Jonny Sparks: There was this one time where half way through the show I was starting to black out and someone ran on stage to cut the show. Needless to say I don’t remember much after that, but apparently after grabbing another beer I carried on and totally rocked the place harder than ever.

Catastrophic equipment failure with no back up… What would you do?
Mikey Toye: I think we’ve been really lucky in that regard so far… My bass-drum skin went through with 3 songs left to play but we just carried on.

Jonny Sparks: I’ve had it so many times whether guitars have cut out or mics stopped working mid-song, it really pisses you off but you just gotta carry on, at least until the song finishes and then sort that shit. Failing that I guess we go acoustic – you can’t stop rock n roll!

Name someone you’d like to punch in his or her stupid face and why?
Jonny Sparks: Ian Watkins from LostProphets – I’m pretty sure I don’t need to explain my reasons.

KC Valentine: Probably Barney the dinosaur… that guy’s a douche! 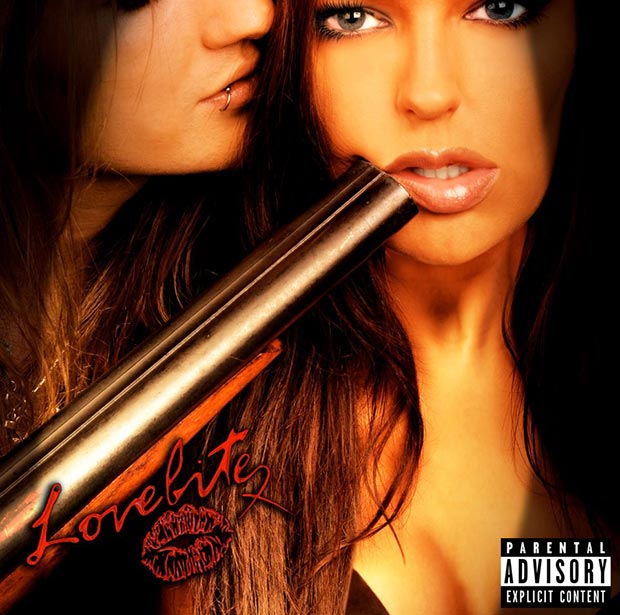 You kick everyone out of the band because you can replace them with anyone you decide, alive or dead… Who do you recruit?
Jonny Sparks: Lead guitar: Randy Rhoads, Bass: Billy Sheehan, Drums: Vinnie Paul.

What is your stance on the legalization of Marijuana?
Jonny Sparks: They should legalize all drugs… The planet’s too over-populated.

Tryx: It would reduce or remove the crime element.

KC Valentine: Legalize all drugs and let people choose for themselves.

Mikey Toye: The government would make so much extra money in tax, I can’t believe it isn’t that way by now.

Who is the biggest asshole you ever met and why?
Jonny Sparks: The drummer from Reckless Love – we had a show with them and was told by their manager NOT to bring our own kit as they have a hired one for the tour. During sound check he comes down crying like a little bitch about how he’s changed his mind and now we’re not allowed to use the kit. At this point we didn’t have time to sort another kit so we were forced off the bill. So, I waited until they went on stage that night, went backstage, broke into their dressing room and unloaded their whole rider of booze into the audience.

Check out the song “Love/Hate”