Composed of four talented musicians – Zach Allen (vocals), Harrison Marcello (guitars), Zak Gross (bass), and Jimmi Kane (drums) – the New York-based rock group, Tempt, like their music like their women… dirty! OK, well we have NO idea how they like their women, but when it comes to their brand of rock and roll, Tempt take things back to a time when glam ruled the airwaves and everyone and their mother was headbanging to songs JUST like these! With their new single, “Under My Skin,” turning heads Tempt is a band that will light up many a solid, backward party this Summer. We caught up with guitarist Harrison Marcello to learn about his key gear and how it impacted the band’s new album.

What one piece of gear do you use to obtain your signature sound?
Marcello: This is a tough one. I love my Suhr Modern guitar but I’ll go with my Fractal Audio Axe-FX II. It’s become indispensable to my sound especially live!

What about it makes it so important to you?
Marcello: It sounds amazing and it is easy to use. It allows you to bring your entire arsenal of sounds anywhere and it’s all in a rack case! I use it with Fractal’s MFC foot controller and it allows me to seamlessly change my sounds. I do a lot of singing live so ease of use is crucial. Both units are so flexible and allow you to structure your sounds in a way that works easily for your performance. I have yet to play out of something that works so well for me. It is an unreal piece of gear and I love using it. 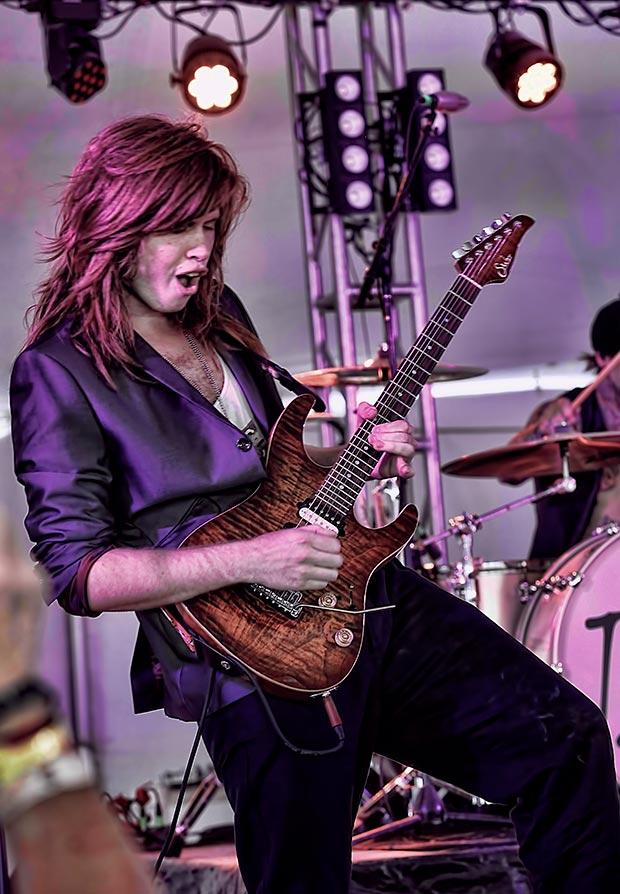 How was this gear used during the recording of your latest album?
Marcello: During the making of our record, I was very fortunate to be able to work with our friend, Mike Hickey. Mike was the guitarist in Venom and is currently Joe Bonamassa’s guitar tech. During the recording of the basic tracks, I was using his Friedman head through his vintage Marshall cabinet. Incredible sound! I then doubled most of the guitars using the Axe-FX II. I also used if for all the clean electrics and all the solos.

How do you recreate your album (guitar/vocal/bass) tones in your live set?
Marcello: This is where the Axe-FX shines. The amp simulations are incredible. There are a couple of Friedman sims that are stock on the Axe-FX II including a great Hairy Brown Eye and a Brown Eye. As a result, I was able to quickly dial in the sound of the amps we had used in the studio as a starting point and quickly tweak them to the point where we completely captured the sound that we had in the studio. I’m running the Axe-FX II into a JCM 900 and a 4X12 cab essentially as an onstage monitor and send a direct out from the Axe-FX II to the house. Most sound guys can’t believe it when they push the direct output fader up. 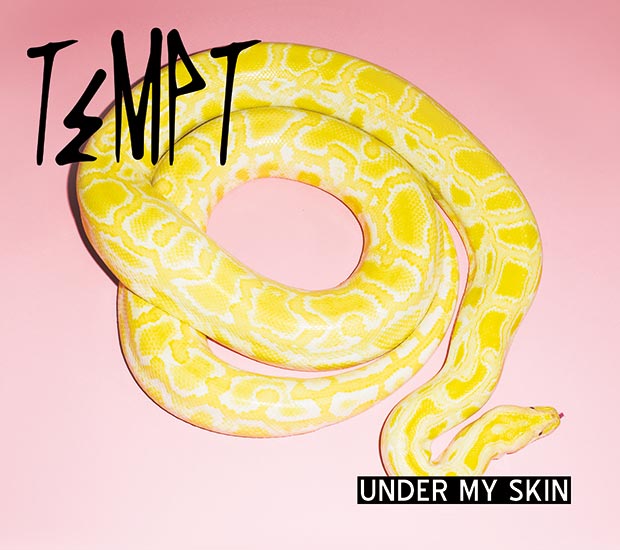 What are the major pros and cons?
Marcello: The Axe-FX II is the most versatile and best sounding amp, and multi-FX processor out there, and with the MFC foot controller using it live is incredibly easy. The range of sounds you can get is incredible. The downside is that if something goes wrong with it you’re dead.

Do you have a backup for this gear, if so, what?
Marcello: Eventually I would like a second Axe-FX II as a backup but for right now I use a pedal board that includes a Suhr riot pedal, OCD pedal, TC flashback delay, MXR dyna comp, MXR distortion plus, MXR phase 90, and an MXR chorus.

How long have you had it, how do you use it, would you ever change it?
Marcello: I have had the Axe-FX II for a little over a year now, and I use it for everything from playing on the road to recording. I don’t see using something else unless it’s an even better version. It is just such a compact and easy to use system that beats anything out there. I can jump on an airplane and put it in the overhead bin and I have my entire amp collection with efx there. 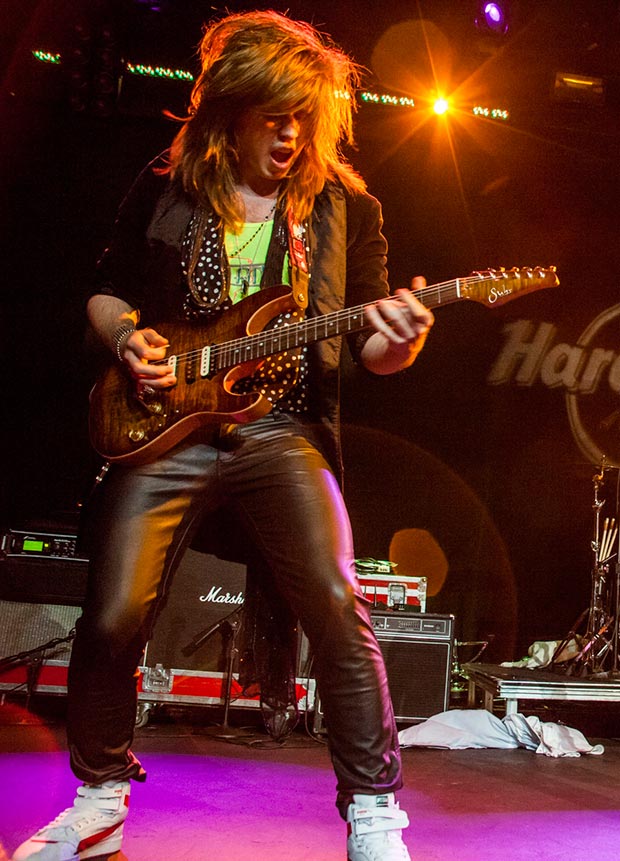 Give us your best “gear goes wrong” story.
Marcello: During a show, halfway through the second verse of one of our songs, my guitar stopped working. No sound. I looked down and noticed that my MFC controller was off, as well as my Axe-FX II and my amp. I quickly realized that it must be a power problem. I looked down and saw that the power strip was off, as I bent down to turn it on, I saw it. A broken drum stick. Jimmi Kane our drummer had broken a stick and it had flown across the stage and bulls eyed the power button! I still haven’t paid him back for that, but I will!

Any final thoughts or comments on the gear?
Marcello: I don’t want to forget to mention my main axe, my Suhr Modern! That guitar is hands down the nicest thing I have ever played and it is also essential to my sound. It sounds amazing and plays amazing, and without it my rig would not be complete! One of the great things about the Axe-FX II is that unlike other amp simulators where every guitar you plug in sounds the same, the Axe-FX II responds to your guitar and your playing. My Suhr with the Axe-FX II is an unbeatable combination.

Check out the song “Under My Skin” 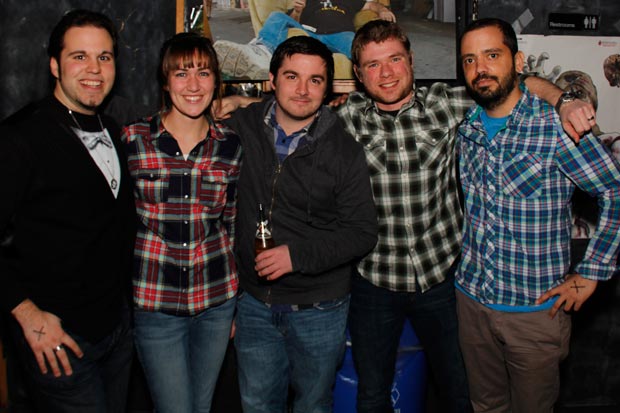 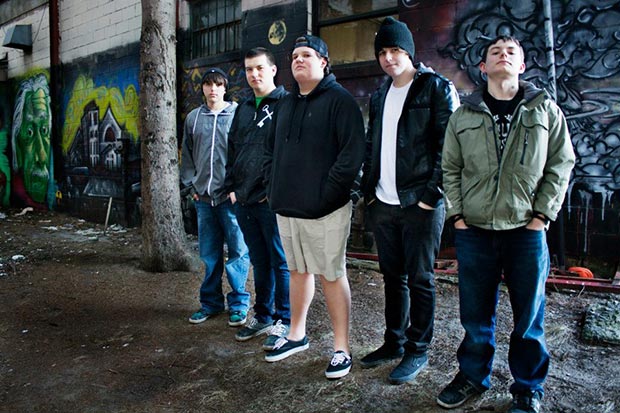