2014 continues to bring us outstanding cover imagery for many Metal albums worldwide. Using all kind of techniques, from traditional painting to digital design, artists have created exceptional visual marvels that amaze thanks in large to their level of detail, careful execution and, in some cases, profound conceptual ideas. In this second part of our “Best Album Covers of 2014,” we keep exploring some of these special pieces of art. Let’s see what the people involved in the making of these images had say. 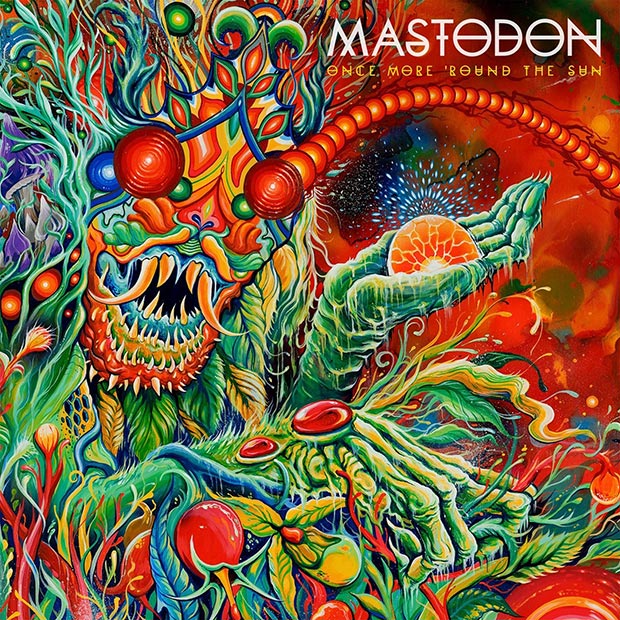 Mastodon’s triumphant 2014 studio recording came accompanied by a monumental visual piece that, according to his creator, Skinner, is about “life and death. The sun brings life and it eventually dies.. it’s a cycle. The season of beginning and end. Organic growth to death and decay.”

The Oakland-based illustrator became involved with the band via his friend, drummer Brann Dailor. “Brann came up with the concept and I came up with all the imagery.”

The artwork possesses the characteristic psychedelic, vibrant tonalities of Skinner’s work and hints oriental art influences. About the latter, he comments, “that I had this Balinese mask staring at me above my bed which I think influenced the aesthetic. The band loved it! I was so happy [because] it took me about 3 weeks of working every day 8 hours a day!”

The original (which can be seen here) measures an impressive 2 feet tall by 8 feet wide and was done via acrylics and ink. 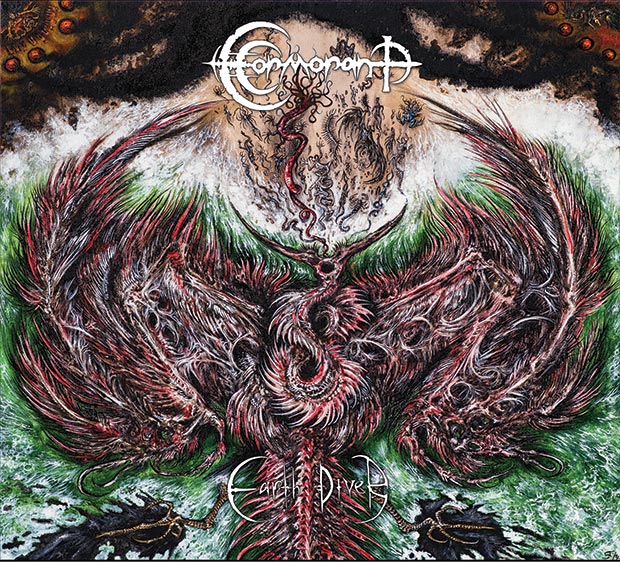 For the first time in their illustrious career, California’s Cormorant, used a male designer for the design of one of their album covers. The appointed artist was American visual wizard, Sam Ford. The result of said collaboration became the arresting cover displayed on Earth Diver, which marks stylistically and conceptually, another milestone for the Prog/Black metal quartet.

“The artwork was another classic Cormorant band experience with each of us adding ideas to the proverbial melting pot,” reveals guitarist, Nick Cohon. “We came up with a list of some visual concepts since the lyrics were still being ironed out at the time, and Sam just ran with them. We were also inspired by Nick Brandt’s photographs of petrified birds in Tanzania.”

About the creature on the cover he comments: “The Earth Diver is part of a Native American creation myth—basically, a cosmic bird dives into the primordial ocean, brings up pieces from the depths and vomits them forth onto the land, where they turn into mountains, lakes, trees and all living beings.”

Sam Ford adds: “With this one I wanted to branch out from my usual watercolor/pen and ink approach and try my hand at acrylic painting, which they were all for, and so we had several months of back-and-forth before the final work began. Since my work is entirely traditional (save a bit of color balance and sharpening in Adobe at the end) and therefore very hard to alter once it’s started, I try to provide extensive concept drafts for bands before I start on the final pieces.”

Expect a more detailed interview with both Ford and the band in a future edition of …And Justice For Art.

03. Ravenscry – The Attraction of Opposites: 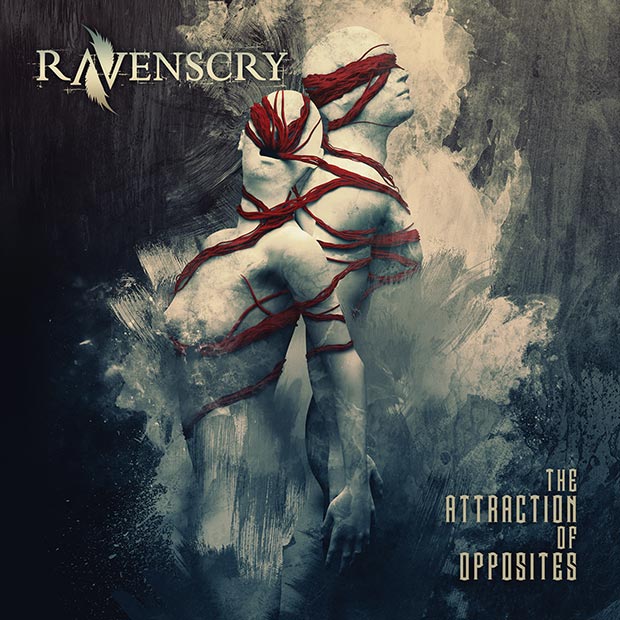 Novel Italian melodic metal collective, Ravenscry, hired Stefano Mattioni to design the beautiful, soulful artwork for their 2014 The Attraction of Opposites. “We wanted to represent specifically the title of the album and Stefano thought about that graphic. The same concept will be found in the music too of course,” comments bassist, Andrea “Fagio” Fagiuoli, referring to the cover concept which alludes to the universal duality between opposite elements.

“We chose Stefano because we already knew about his works,” Fagio adds. “We wanted him because he is absolutely astonishing. When we saw the finished art we immediately felt in love with it.” 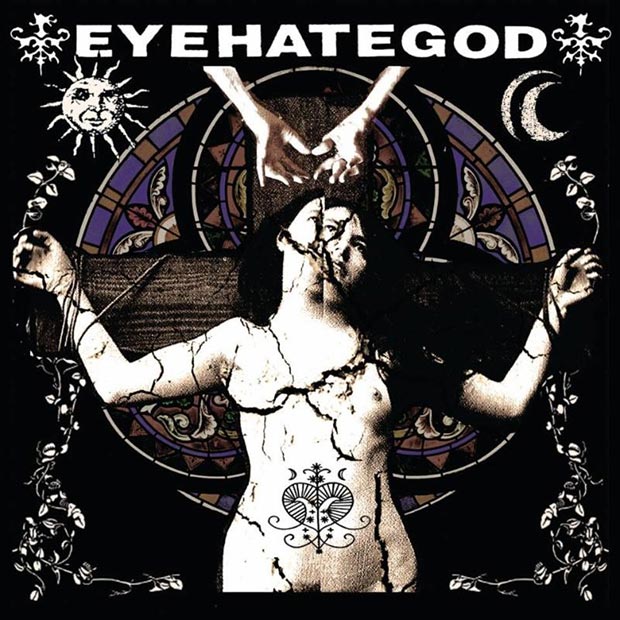 For their glorious comeback, self-titled album, New Orleans’ most infamous band returned to their roots and opted to design the cover art by themselves, specifically it was bassist Gary Mader who did the honours. As with the cover for their classic Take As Needed For Pain, the conceptual focus of the new graphic is a young, naked woman surrounded by strange iconography. These elements give the whole image a vintage, pseudo-esoteric vibe.

“I put the cover together with input from the other members, and some raw images I collected over a few years,” Madder confesses. “It was done on a computer, but I went great lengths to preserve the cut and paste aesthetic. I still source most of the material from actual books and don’t do much to the actual images aside from fine tuning.”

“The broken look is something I’ve used in past collages, but instead of cutting the image into pieces and reassembling on a black background, I used a picture of a cracked wall, made it transparent, and placed it to kinda make it look like the third eye is emerging. I built the rest around the crucifix with symmetry and geometric shapes in mind. I’ve been stuck on circles and triangles, hence why I chose the glass I did for the background. And in my head, those circles form an upright triangle, complemented by the inverted triangle formed by the arms reaching down at the top of the cross.” 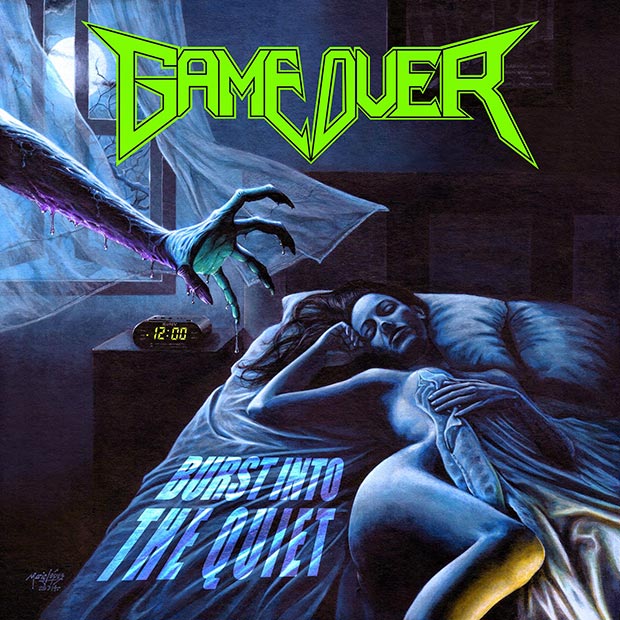 The young and restless metal maniacs, Game Over, accompanied their new album Burst Into The Quiet with an exquisite, ominous art featuring a scene that could have been taken directly from an 80’s horror movie.

The cover’s throwback look was achieved thanks to the talents of Guatemalan artist, Mario Lopez. “The concept was an idea of the band,” the designer says. “The cover was painted with acrylics on cardboard and they even sent me some sketches with the description about the elements they wanted!”

We’re already hoping the band decides to make a Burst Into The Quiet, Part 2. Maybe then, we will know what happened with the girl after that ghoulish hand grabbed her.

Next Time on AJFA: The hottest new Metal illustrators out there, Part 3.
Previously on AJFA: Interview with author Martin Popoff about the book, ‘The Art Of Metal’ 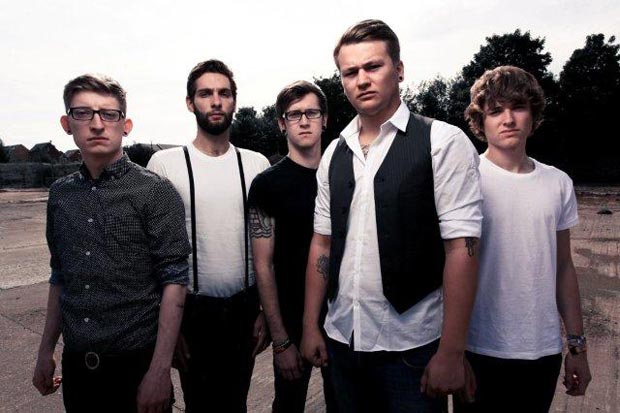 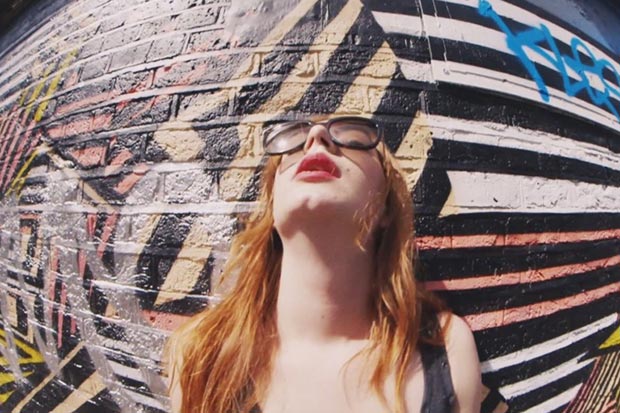