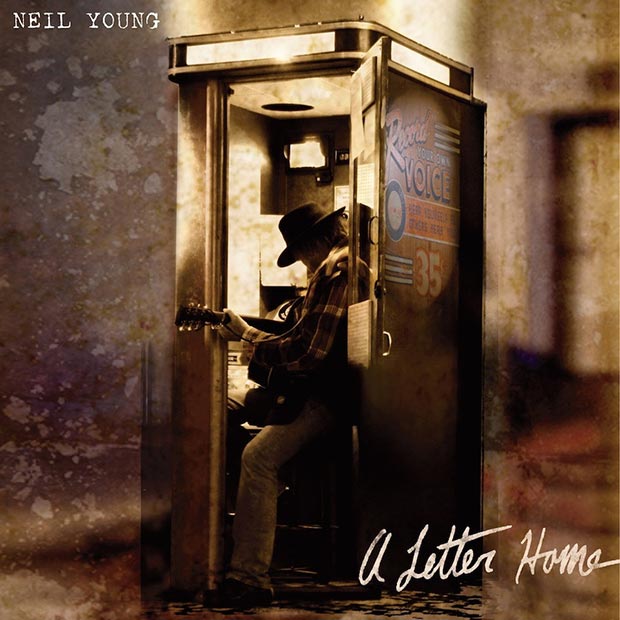 If there was one musician who you’d think has done it all, who no longer needs to test himself for the purpose of impressing others, it would have to be Neil Young. Instead of relishing his senior position as a folk and grunge trailblazer, Shakey has kept pushing himself artistically without the slightest regard for what anyone might think, longtime fans included. Young’s latest burst of creativity comes in the form of a covers album, although this is anything but some run-of-the-mill tributes to contemporaries such as Bob Dylan, Bert Jansch, and fellow Canadian Gordon Lightfoot.

A Letter Home sees the almost septuagenarian Young collaborate with Jack White, who many rock snobs would still consider wet behind the ears in comparison. More specifically, Young makes judicious use of the refurbished 1947 recording booth at Third Man Records in Nashville Tennessee, giving new life to a set of songs near and dear to his heart with minimal accompaniment. By the looks of the absolutely gorgeous album art, it didn’t look like Uncle Neil had room for much else than his trusty Martin acoustic in hand. Young does strap on the harmonica headgear for a few numbers, and White got what sounds like an old timey, player piano pushed up as close as possible to his musical broom closet for “Reason to Believe” (made famous by Rod Stewart in the ’70s), Willie Nelson’s classic “On the Road Again” as well as “Since I Met You Baby”.

Like the legend of Elvis making his first recording as a gift for his mama, A Letter Home can be interpreted as Young’s therapeutic way of communicating with his own mother Rassy, who has been deceased for nearly 25 years. He refers to White’s booth as a sort of magical “box,” with the most heartstring-tugging moment for me being when Young tells his mother to pass along to “Ben” that he still has a lot of work to do, but will be with them all again eventually. Not sure if the Alberta tar sands protester is referring to his son Ben, who was born with cerebral palsy but is still alive and well as far as I know. Whoever he’s talking about, these 11 tracks take on an added depth of emotional weight enough to drown a litter full of Instagram-starring cats.

I also found it interesting that this is our first offering from Young since the announcement of his supreme quality-promising Pono music service. A Letter Home sounds as if it was found in a milk crate at a garage sale; I feel more than a little guilty not experiencing it on vinyl, not that the Third Man Records store has been able to keep any 12” albums in stock since releasing them without warning on April 19th.

As my wife commented, it’s almost as if we shouldn’t be allowed to listen in on A Letter Home, as it’s THAT personal. Neil Young fans should be honoured he’s given you the opportunity for such an intimate peek into his family life – it probably won’t earn repeated spins on your private turntable, but you should take advantage of this giving his new-yet-incredibly-old-sounding and powerfully moving record your undivided attention at least once.

Check out the song “Needle Of Death”