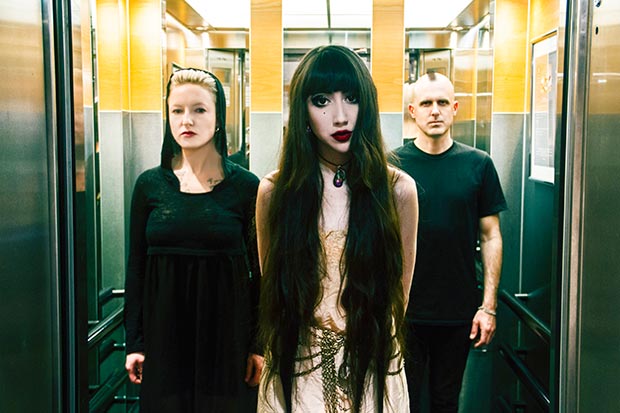 It is difficult to put the music of the Nostalghia into a category; the Los Angeles-based trio generate lavish sounds from electronic reverberations with a melding of rock, pop, and industrial sensibilities. Chrysalis, the band’s latest release, offers up an enigmatic assortment of songs, tinged with melancholic despair.

At the recent Soundwave 2014 festival in Australia, Nostalghia shared the bill with a legion of bands, including Asking Alexandria, Alice in Chains, Dillinger Escape Plan, Five Finger Death Punch, and Mastodon. While quite different than many of the acts there, Nostalghia’s set nonetheless was well-received by the crowd.

Singer Ciscandra Nostalghia describes the experience at Soundwave, with hard rock and metal bands as bookends.

“There were all heavy bands on the bill, pretty much. A lot of rock and roll and metal. It was amazing, though. We actually had an incredible reception, which was great. And a lot of wonderful reviews. So overall it was a positive experience, which I wasn’t quite sure it was going to be (laughs).” 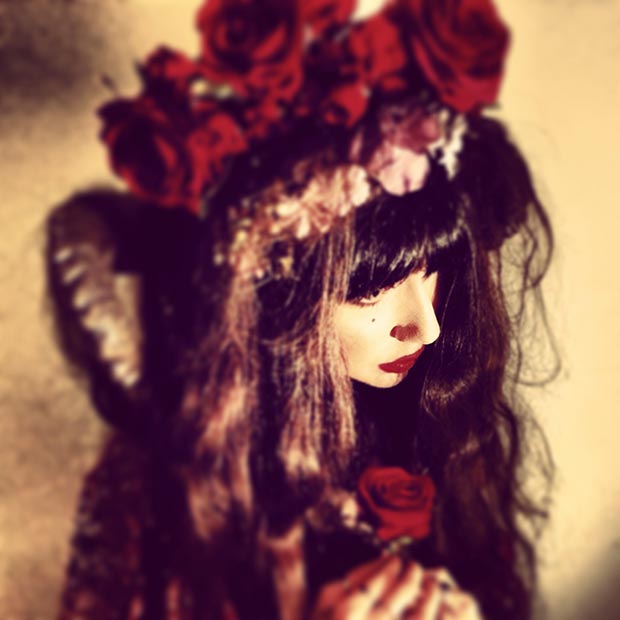 “I think that metal fans are actually more receptive to things that are different, just because they themselves are different from the norm as well. So they tend to be a little more open-minded. But we’ve actually been lucky. I mean, we’ve been put in front of bands that are very pop-like. We went on tour with 30 Seconds to Mars. That crowd was really receptive as well.”

Nostalghia is Ciscandra Nostalghia on vocals, piano, guitar and arrangements, and Roy Gnan on percussion, piano, and accordion. In addition, Adele Stein plays cello during live performances. Add a bunch of strange noises, including the sound of moths’ wings flapping, and that creates the sonic gist of the band.

“When we were first playing shows we had a big band,” Nostalghia says. “We had a nine-piece live band and I would sit on the ground and cover my face with my hair and just internalize everything. It was easy for me to sit on the ground because I could feel the vibration of the music and I was able to lose myself more, so I didn’t realize there were people in front of me. I could have easily have gone wildly wrong, but people were actually intrigued by it, I think. But now I’m a much different performer. I’m much less nervous the more people there are. So if there’s 100,000 people, I’m just dandy. But performing in front of a hundred people–it’s just nerve-racking for me and I don’t like it.”

The origin of Chrysalis began when Nostalghia relocated from Moorpark, California, a distant suburb in Ventura County, to Los Angeles. The move into the big city was arduous, though the transition spurred a writing spree and a gradual emergence from her malaise.

Check out the song “Cool For Chaos”

“I was going through a very strange period because I moved to the center of Los Angeles and I had never wanted to live in the city. I was really afraid of it because I’m highly sensitive. I’m easily stimulated by things outside of myself and I would be with my band mate or band mates, we’d drive down Sunset Boulevard and I would literally start crying over the billboards and advertisements because it was just too much for me and I just didn’t like it. There was something about it that made me feel hollow and really sad. And so I ended up kind of locking myself up for a while and really not leaving, to the point where I wouldn’t even get my own groceries because I just couldn’t go to a store. I couldn’t really get out of my house. And then I decided that I was going to start putting myself in uncomfortable positions anyway, in order to kind of lure myself out. So I did, and I thought of doing everything that would make me uncomfortable. I was writing this record at the same time, so there were all these symbols that were kind of coming through like “Stockholm Syndrome”, being captive and being in love with the captivity. Then the title of the album which is Chrysalis, which is a hardened outer shell of a pupa and you hear the sound of a moth throughout the record. The front cover is me coming out of a chrysalis. So it is very conceptual.”

The breezy “You and I” seems oddly misplaced in the middle of the album, dissimilar in sound and story to the other tracks on the record, such as “I’d Still Kill You”.

“It was a song that a lot of people latched onto. But really in the grand scheme of things… that was one of the first songs I ever wrote and it was during a time that I was young- minded. I think it is important for the record, in the sense that I talk about chrysalis being the second year and then the child dies. It’s kind of nice to be able to see that in this song. It kind of shows that this opposite extreme of the rest of the record, which is kind of interesting and kind of sad at the same time. There is a certain innocence in that song that you don’t really find in the others. It’s definitely not my favorite song to perform live, and a lot of times I don’t perform it live.” 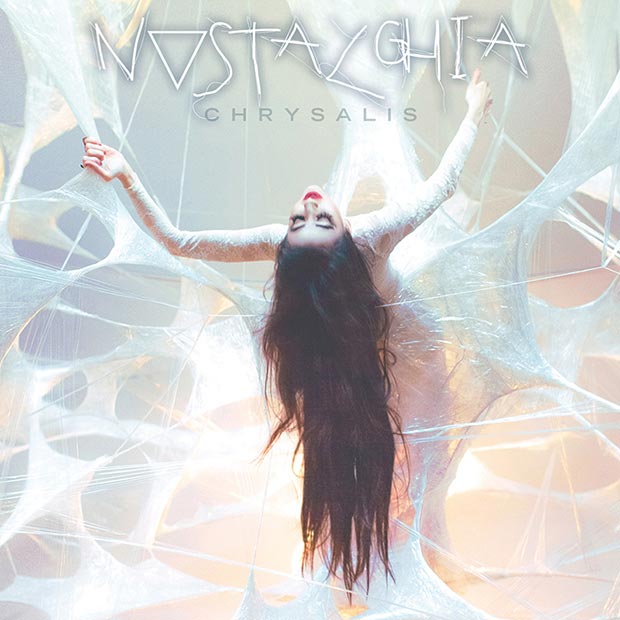 Nostalghia cites her late uncle, an Iranian musician, as her main musical influence.

“I don’t really know what it was about him. He died when I was very young. He was doing a lot of drugs, but he was a musician himself and he played with some of the biggest pop singers in Iran. He could just pick up anything and pretty much play it. He was really inspiring to me as a child. He was very free with himself and he would just walk in a room and he was such a presence. And that presence was really inspiring to me. He would tell me to listen to raindrops and we’d listen to raindrops and he’d have me listen to them with a different rhythm each time and it’s forever warped me now. Whenever you turn on a car and you hear that timely beep, if you don’t turn on the ignition all the way. Now when I listen to that I can literally warp the rhythm in my head and I truly believe that it’s being warped. It’s really strange and it ends up–sometimes my family will get really freaked out by the rhythms that I write with percussion. He’s the only person in my family that I ever really related to.”

“I think that life can be heartbreaking in general. It’s not always based on love. Yes, I had a real hard time growing up. I kind of felt like the missing zygote, never really found a sense of home. I didn’t really have any friends growing up. Kids didn’t really take to me well. It was an extreme reaction. People either absolutely hated me or were really intrigued in trying to figure out what I was. I was a strange kid, so I didn’t really have the greatest family life either. Now I have an outlet to put all my emotions into. I’m also very sensitive. I’m very sensitive and emotive, so I feel everything very heavy and that tends to show through in the music.”

Check out the song “Sunshiny Milk”