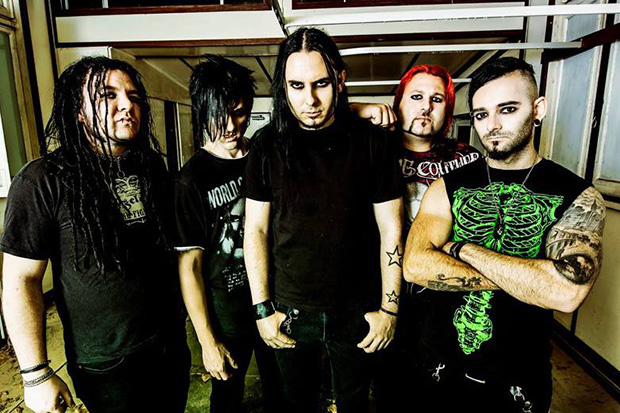 The Australian industrial metal band, Our Last Enemy, have just released their newest effort, Pariah via Eclipse Records and are now preparing to take the metal world by storm. Bassist Matt and guitarist Biz recently took a moment out of their busy schedules to answer a few questions for PureGrainAudio about the band, the record, and their upcoming touring plans. Here is how the conversation went.

For those not familiar with Our Last Enemy can you tell us a little bit about yourselves?
Matt: Our name is Our Last Enemy, we’re five guys from Sydney, Australia. We play a style of metal incorporating Industrial elements along with electronica, hardcore, gothic and other styles. Our debut album Pariah comes out all over North America on March 11th, the album is produced by Christian Olde Wolbers (ex Fear Factory) and also features 3 remix tracks from Mortiis, Angel (Dope) and Travis (Divine Hersey). We also like long walks along the beach.

Your new disc, Pariah has just been released. Now that it is complete how do you feel about it and are you satisfied with the outcome?
Matt: Yeah, we’re very happy with the end result… we’ve put the best songs that we have at this point in time on the album and we think the album really sums up everything about Our Last Enemy. We also tried to give the listener as much value as possible, with the amount of songs and the remixes, so we hope everyone enjoys listening to the album as much as we did making it.

Bizz: We are very satisfied. Each song has a life all it’s own. The album is the result of blood, sweat, tears and a rabid lust for creating music. I think the raw power comes across like a brick to the face. But I guess I’m bias. So you should give it a listen and judge for yourself.

What is your writing process like?
Matt: The song writing happens in a few different ways – we don’t really have a set process as such. Sometimes it’s the five of us in a room working on different ideas that we have, other times it would be one or two of us sending mp3s back and forth to each other, then working on them in the rehearsal room. Occasionally, like three months down the track when we think we’ve finished a song, someone will say “hey, I’ve got an idea for that song” and we may rip the song apart and start all over again.

Bizz: The process differs for each song. Sometimes a song will start out as a riff that we jam on at rehearsals and then we start to form it into a song. Then, we bring it into the studio to demo it and mess around with the arrangement until we’re satisfied. After that, we jam on it some more and add the finishing touches. Other songs start out as a studio demo that one of us brings to the other guys to listen to. Then we work on it from there. I think our best songs are written that way. We all contribute heavily to the song writing and our band is a true democracy. All riffs, arrangements, etc, are voted on as a band. This seems to work as a form of quality control. For example: if the majority of us think the bridge in a particular song isn’t working, then we just bail on it and try new things until everyone is happy with it. Each guy in our band has a very different approach to song writing. It keeps things interesting. Sometimes one of us will say “hey, let’s try ______” and the rest of us will be like “that’s not going to work.” But then to our surprise, it does work! So we try everyone’s ideas until we find the best thing for the song.

Where do you draw your inspiration from when you are writing?
Matt: Well, like anyone I guess the style of music that we listen to influences us. But we all have individual tastes, both common and not common to the rest of the guys in the band, which is a good thing, otherwise it would be like a lizard eating its own tail… f**king pointless! Feelings and emotions come into it as well; when we write songs we always aim for the song to have a certain ‘landscape’ to help convey a certain feel or meaning. We also like to draw inspiration from things outside of the box, as an example I got an idea for a sample from a trucks brakes screeching next to me on the highway… So we get random ideas like that as well.

Bizz: Inspiration comes in many forms and comes from many sources. Too many to name. But if I had to strip it down to basics, I’d say we have a lot of horror movie soundtrack influence. Also, who isn’t influenced by their roots? I mean, the music we first got into when we were kids. Then there’s the current music that we are listening to which tends to trigger new inspiration and ideas. Of course, our song writing is also heavily influenced by raw emotion. Like when someone pisses you off royally or when some bitch rip your heart out and feeds it to the lions. Ironically, our darkest music usually comes from pure joy and happiness. Kidding of course. 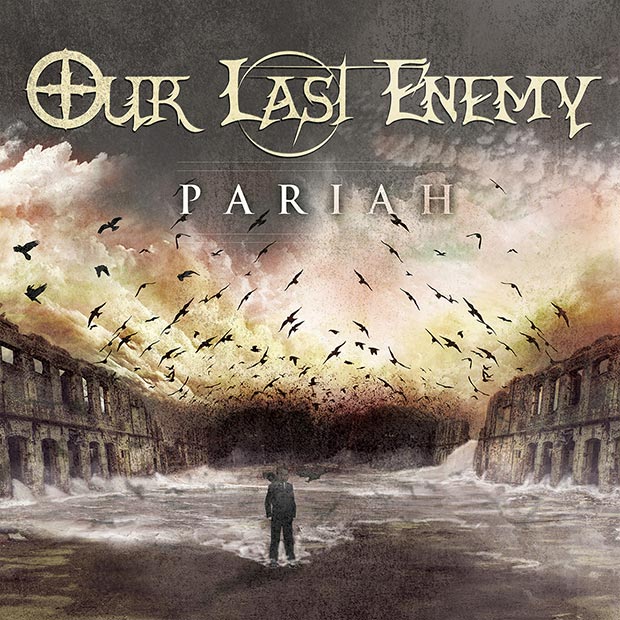 What is the story behind the name of the band Our Last Enemy?
Matt: The name Our Last Enemy comes from a quote from the bible “Until the day we meet our last enemy, which is death itself”. We’re not a religious band or anything like that, but we liked the meaning behind it, and we found that the meaning could be taken in polar opposite ways – positive or negative. As in you can look at the name and think the band is named after death, or you can look at it in a positive way, which is – live life to the fullest, because one day we all will meet our last enemy. We also liked the fact that another polar opposite was in Tarot cards, the death card actually means re-birth and new beginnings. So people can take what they want from the band name, much like our music.

What is the story behind the name of the record Pariah?
Matt: Pariah is the name we gave to the central character of the album. Pariah is an entity who causes/follows/is a witness to anything devastating in the world, whether it’s the past, present or future. He doesn’t die, he doesn’t live. He’s is neither the devil nor god, he is just devastation.

Any plans to tour? Any plans to tour outside of Australia?
Matt: Yeah, most definitely! We will be touring all of North America, we can’t announce anything just yet, but we hope to play as many shows as we possibly can.

Check out the song “Crisis”

What is the strangest thing that has ever happened to on stage or at a show?
Matt: I don’t know if this is strange, but I think it’s a cool story and something I won’t forget. We played a show in Sydney a couple of years back, and the crowd was getting right into our set and was getting pretty rough with each other. Then Oli (Vocals) told the crowd something like “throw your drink at us”… and then, I just remember all these glasses full of beer being hurled at us. We just stood there and took it – it was great!

Bizz: Some skinhead kept jumping up on stage, shoving me, and then jumping back into the crowd. At first, I thought he was just moshing around and enjoying himself. But each time, he pushed harder and harder until I realised he was just being a dick. So the next time he jumped up on stage, I stopped playing guitar and bashed him with a microphone stand. He was then ejected from the venue and I got to stay and finish the set without any consequences. I don’t know if that story counts as “strange” but it is a true story and it’s an entertaining one.

What is next for you guys?
Matt: Now that the album is out, we hope finalize our North American tour dates so we can come over and play the songs live to as many people as possible. We’ve also just filmed a new video clip for our song “Devour The Sun” which we hope to release in the next couple of weeks, so keep an eye out for that! And we’re writing our second album between different tour dates, so we’ll be busy locked up in different studios when we’re not playing live.

Bizz: We’re going to spend some time writing because we’ve got so much new material to sift through and piece together. After that, we’re going to do some more touring. Also, we’ve got another music video coming out this year, so be on the lookout! Until then, you can enjoy the music video for our latest single 10,000 Headless Horses and be sure to grab a copy of our new album Pariah, available now!