For some Hard Rock/Metal fans, the best way to support their favorite bands is by buying records, t-shirts, concert tickets, etc. Others go a little further and start fanzines, blogs and websites. There’s also a very select group of people that helps to protect and enhance the visual legacy of the genre. British designer, Hugh Gilmour is one of those such people. He’s been a true champion in keeping current the visual works of old masters like Black Sabbath, Rainbow, Whitesnake, Dio and by also designing new, original covers for artists like Bruce Dickinson, Orange Goblin, Grand Magus, and the list goes on… Herein Gilmour talks about his origins as a designer, his passion for music and the particularities of creating the visuals for Special Edition reissues, something which he considers a unique privilege.

At what age did you discover your interest of art? Do you have any formal education in visual arts?
Gilmour: I was good at art as a really little kid, but children are very rarely encouraged to pursue art beyond the age of 7 or 8. I was recently wondering about why so many musicians went to art college instead of studying music, and I guess it’s because so much of music is to do with strict study, whereas art college allows a greater degree of freedom and self expression. After leaving school I did a year of foundation studies, two years of a diploma course in technical illustration and a year of a BA in illustration. The latter was at Kingston Art College, the same place where Sandy Denny and Eric Clapton studied. I went back and did a Masters degree in design communication, but in all truth, my greatest education was hanging around record stores, reading Kerrang! Magazine throughout the 1980’s, going to plenty of gigs and talking to as many people involved in Rock music as possible. Whenever I’ve met someone involved with Sabbath, be it Krusher Joule, Tom Allom, Jim Simpson or Ross Halfin, I’ve always asked them for a story about Black Sabbath. 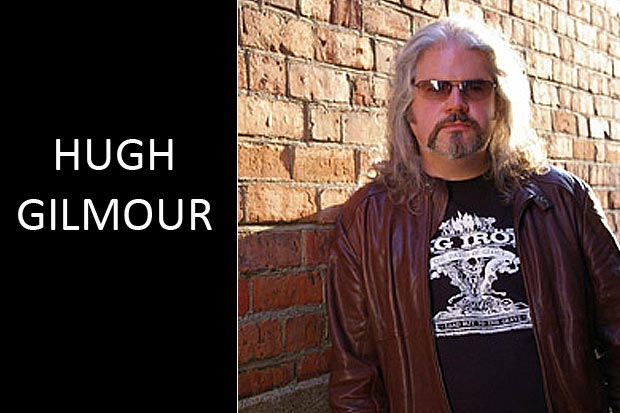 How did you eventually become involved on designing Rock and Metal albums?
Gilmour: There was a job going at Castle Communications’ Mac department, and applied for it and never looked back.

When did you create your current company Gilmour Design?
Gilmour: I went “solo” so to speak with Gilmour Design in 2001. I’ve also just started a Rock and metal label called HNE Recordings. Check out http://www.hnerecordings.com for more details.

You have plenty of experience designing special packaging for bands like Black Sabbath, Rainbow, Whitesnake, etc. For you, as a fan, how important are special editions and re-issues specially with the emergence of the digital downloading and the MP3 format?
Gilmour: A lavish box set or special edition won’t appeal to any and every music consumer, so I believe you should know your audience. Having said that, if you stand any chance of selling physical formats then the finished product should be presented in a worthwhile and thoughtful manner. From my experience, Rock and Metal fans like to have physical product, and don’t see a great attraction of downloading (paid or otherwise) when compared to buying a nicely presented CD or replicated LP. One innovation I thoroughly approve of is the LP that comes with a download code so you can legitimately get an MP3 version of the record. 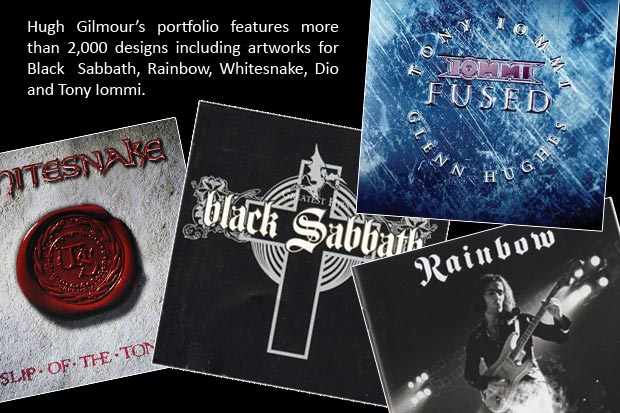 How do you keep the balance between respecting the original visual elements and incorporating new ones to enhance the visual content of an album re-issue or special edition?
Gilmour: As a rule, I try to keep the front and back of the LP cover identical the front and back of the CD booklet. If there was a gatefold sleeve or inner bags, then these should be reproduced as clearly as possible. If there is the opportunity to have two covers, such as a digipak, or a slipcase, where the booklet itself isn’t the cover of the final product, it’s nice to maybe have a new design, but only as long as it’s in keeping with the integrity of the original design. The Japanese are masters at reproducing the miniaturized LP sleeve in CD form and size. They call them “paper sleeves”.

Does the budget for a re-issue influence how much you can do and how the finished product will look?
Gilmour: It’s nice to have additional photos, but it can get cost prohibitive. Likewise, finding rare memorabilia like foreign picture singles and tour books can be expensive, but they will all enhance the final product. 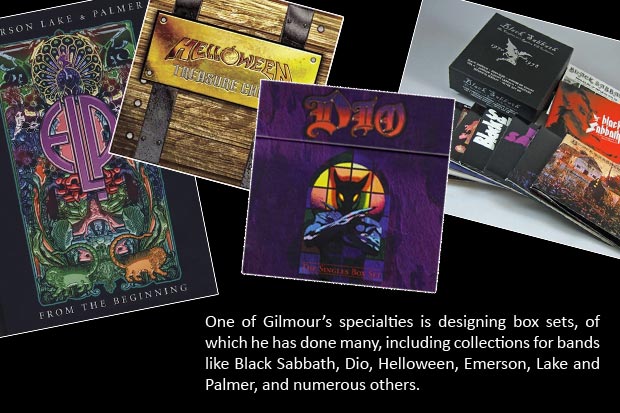 With so much archive material to pick from nowadays, how difficult is to find the balance on the right amount of elements you will use to design a re-issue?
Gilmour: I don’t think there is so much archive material to pick from. I guess it’s a lot easier to track down old posters and 45s on the internet, but it’s not as if they’re printing any more of them, is it? But sometimes you can strike gold, especially if there’s a band member or super-fan who has a large, dedicated collection, in which case you’d choose the most relevant pieces, or save them for a box set.

You’re also known for being a notable liner notes writer for re-issues. How crucial are liner notes to give the music a new context specially for new fans?
Gilmour: The liner notes are important for filling in info about a band and the sources or history of the bonus material. Oddly enough, most new LPs tended to have liner notes on the back covers throughout the 1960s, but maybe it wasn’t deemed necessary later on, or gave the band a bit more mystique. It was a massive jump from having a load of text and info on the back of a Rolling Stones LP in 1966, to 1971 when Led Zeppelin didn’t have any text at all on the outer sleeve of their fourth album. 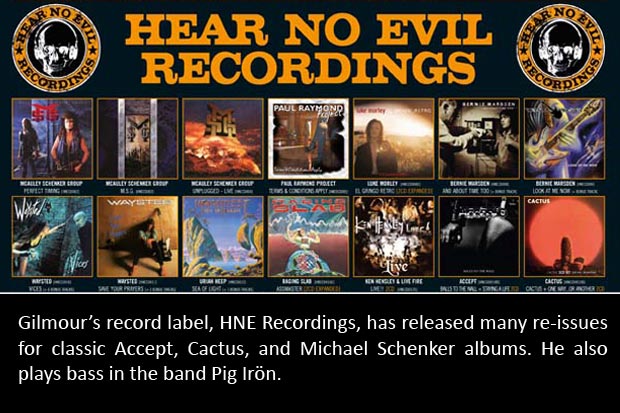 Are special editions and the resurgence of the LP format a way to preserve and enhance the importance of physical albums, especially for current and future generations?
Gilmour: I think it’s sad that the 12″ LP faded away from being the primary format for consuming music, though it’s making a comeback. The 12″ sleeve was the album’s own advert and marketing when sat in a record shop. In all honesty, I can recall buying LPs in the mid to late 1980s that had pressing flaws straight from the shrink wrap, so I remember thinking that a more stable format like compact disc was required. The truth is, the quality control of making vinyl now is far greater than it was when it was being phased out at the end of the 1980s and beginning of the 1990s. I oversee vinyl reissues for Tangerine Dream, Marillion, Lindisfarne and Whitesnake, and the quality of the sleeves and pressings has the utmost care and attention applied to them.

Last question. What’s your all time favorite cover artwork?
Gilmour: That’s a tough one! For Sabbath it’d probably be Technical Ecstasy. For Maiden, it’s probably their first two LPs. Hugh Syme has produced some great designs for Rush too!

Next Time on AJFA: A Guide to (some of) the Best Metal Album Covers of 2014… so far: Featuring Behemoth, Cynic, Alcest, Orpheus Blade
Previously on AJFA: “The Chuck Schuldiner Reissues” – An Interview with Death’s former manager Eric Greif 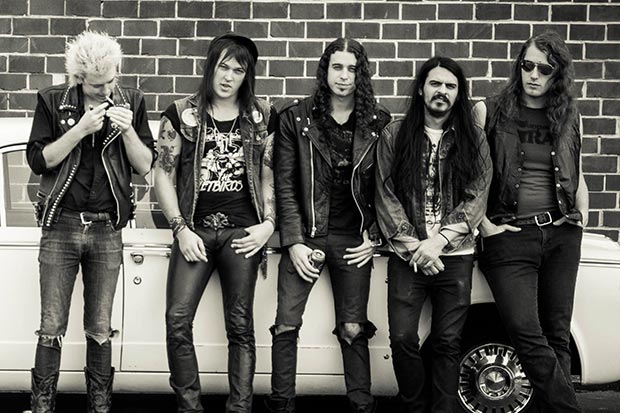 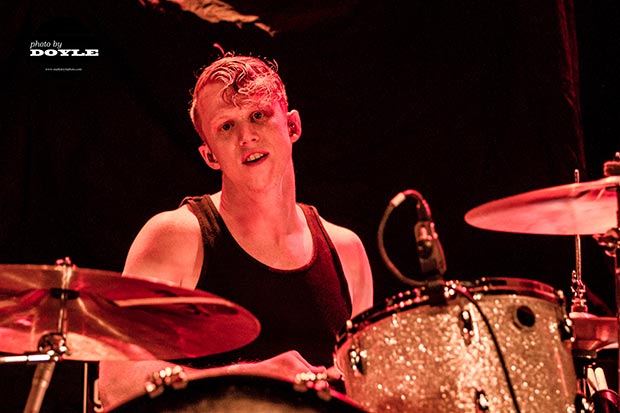