Despite last year’s horrendous weather causing all sorts of problems for Download organizers and weather reports ranging from pouring rain to thirty degree heat this year, it didn’t stop eighty thousand rock fans from descending on Donington Park for the annual rock extravaganza.

Having been forced to cancel their appearance at last year’s event, Brit metallers Rise To Remain make up for it with a blistering set of anthemic metalcore (more than justifying their jump from second stage to Main Stage) and got Download 2013 off to a shredding start. Making our first venture into the smaller tents, we find another British mob, this time hardcore mob Palm Reader delivering an impressively vicious set to a fairly busy tent. Back outside and, following Architects, fellow Brits Asking Alexandria complete a hat-trick of British bands on the Main Stage and do not disappoint. Joined by a massive following in the crowd, the stars of British metalcore put in a raucous performance with “The Final Episode” providing a thunderous wake up a call for those punters still crawling out of their tents.

With Download 2013 now well and truly in full swing, the big hitters start to take over the Main Stage with rock heavyweights Papa Roach proving why they are still one of the most exciting bands from the nu-metal era with a fist-pounding, energetic performance. Meanwhile, back over on the third stage, The Sword are treating fans to thirty minutes of brash, retro-metal. Back over onto the Main Stage for the return of a Donington legend in the form of Phil Anselmo and his Down brethren. Wailing through their set, Anselmo stalks the stage smashing through stoner-metal anthems like “Hail The Leaf” and “Lifer” like only Down can.

Making a quick dash to the second stage we manage to catch a good portion of Europe’s set and, with the band another casualty of last year’s appalling weather, Joey Tempest and Co ensured that Download got their fix of hard rock this time round.

Heading into the latter part of the evening, American shock rockers Motionless In White prove why they’re one of the most talked about metalcore bands around with a set that should have certainly silenced any doubters who thought the band were all image and no substance. With little time to grab a beer we’re back at the Main Stage for the appearance of Korn, complete with returning guitarist Brian “Head” Welch. Smashing straight into “Blind”, like Papa Roach, Korn are another band from that era who show that, despite the odd blip along the way, they’ve just gone from strength to strength putting in another powerhouse performance for the Download faithful.

With the evening heading towards it’s apocalyptic climax, the atmosphere is building with many in the third stage tent left stunned as hardcore legends Converge decimate a crowd hungry for their chaotic hardcore. The problem with bands like Converge is that festivals have a tendency to turn the heaviest of bands into a mess but, tonight, Converge sounded like hell on earth, just as they should. 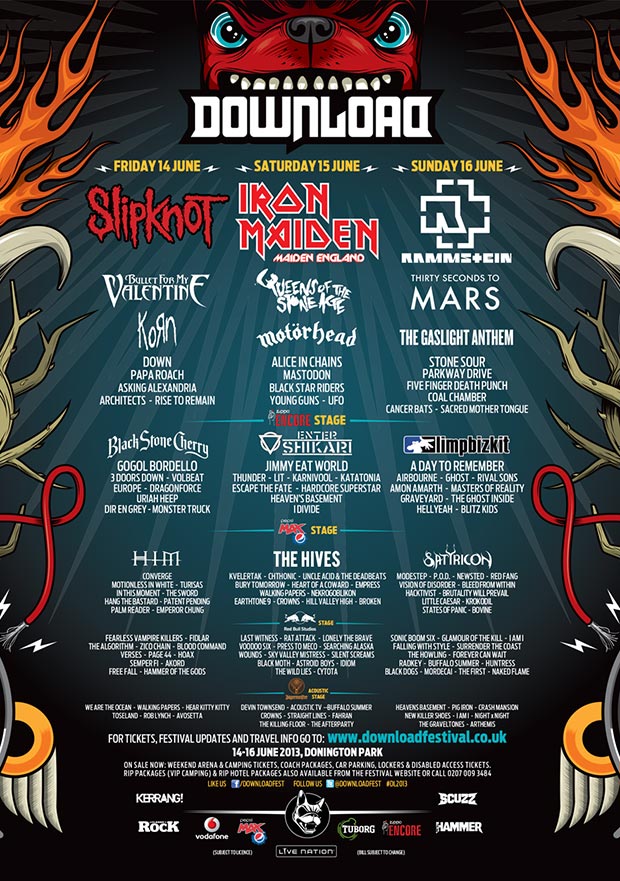 Which all left a big ask for Bullet For My Valentine who had the unenvious task of sitting between Korn and headliners Slipknot. As slick as ever, the Welsh melodic metallers threw caution to the wind detonating enough pyro to wake up the nearest town and racing through crowd favourites like “Your Betrayal” with all the grace of a band who look well and truly at home on the bigger stages.

And so to headliners Slipknot. What can you say really? Ages ago during an interview with Chris Fehn, I put it to him that their recent appearance at Reading Festival looked a little jaded. His response? “Even a tired Slipknot performance smokes every other band around.” Tonight though, there are no doubts about who the daddies are as the Des Moines metallers are simply untouchable. From the anthems (“Heretic”, “Anthem”, etc.) to the chaotic but polished stage show to the skin-singing pyrotechnics, this is Slipknot in their element and, even delays to deal with crowd crushes fail to knock the band off their stride as they well and truly set the bar high for the remaining headliners.