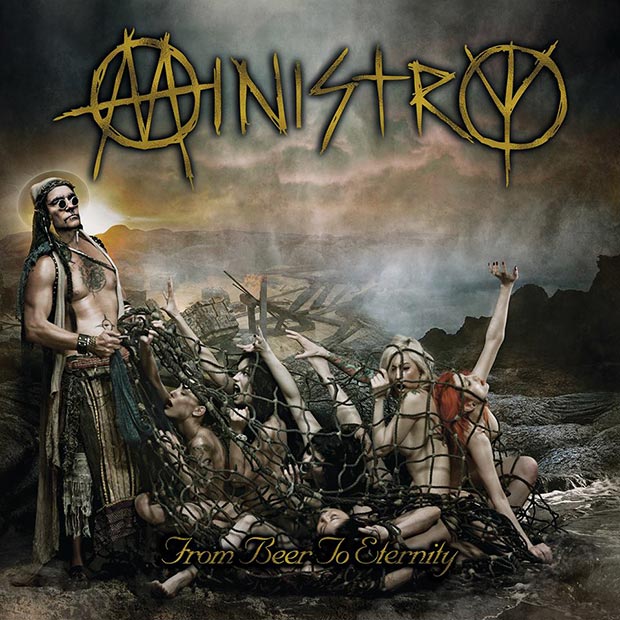 Ministry – “From Beer to Eternity”

Well, here we are, another new, supposedly last farewell album from Ministry. If memory serves me correctly, The Last Sucker was meant to be the final act, but since then we have had the impressive Relapse and now From Beer to Eternity (FBTE). The release of this album is understandable however as indeed, this recording could very well be the last. It is essentially melded together from tracks Al Jourgensen and Mike Scaccia produced shortly before his tragic death from a heart attack whilst on stage with his other band ‘Rigor Mortis.

As you would expect from Ministry, this record is laden with social, political and religious commentary and even a take on climate change (“Perfect Storm”), all served up through brutal and vitriolic vocals with that usual and uncompromising Jourgensen edge. To be honest, the blood-line is there for all to see between the final few Ministry albums, there is something of a template they apply to their records of late, if FBTE being a little “dirtier” than Relapse. The pattern is much the same, a selection of samples here and there interspersed with grating guitars, thunderous beats, doused with a savage energy only Ministry albums can deliver, especially in tracks such as “Punch in the Face” and the wall of crashing noise that is “Side FX”.

No one track is quite a “Jesus Built my Hotrod” or “Stigmata” and this album is definitely not Psalm 69 or The Mind is a Terrible Thing to Taste, but this is a solid collection of tracks nonetheless.

FBTE kicks off with the eccentric “Hail to His Majesty”, before crushing the eardrums with the eclecticism and ferocity of the highlight track “PermaWar” before traversing the steamy side of industrialised metal (that by the way Ministry poured the filth into the mould and set) through “Fairly Unbalanced” (a rancorous slash at US stations, the US government and everything else Jourgensen disdains) and finally hitting the last outpost of anger in “Thanx But No Thanx” with its occasional Ska vibe. The final few 2 tracks provide a substantially mellower outro to this supposed signoff album.

FBTE then, moves on from Ministry’s industrial roots and refocuses more on the ‘metal’ sound Ministry have adopted of late; this is a muddy and marching stomp through 55 minutes, a little drunk in places but a fine album to sign off on.

Check out the song “PermaWar”