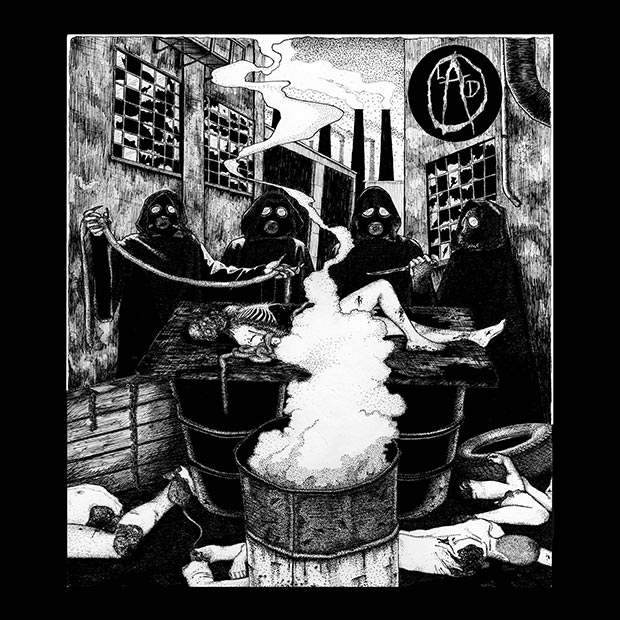 I discovered Vancouver’s Life Against Death a few months ago when in May they were opening a show for traditional metaller’s Cauldron. LAD were the first band to play and I was struck by their high energy cross of grindcore, hardcore, and thrash. The band were a great start to the night and afterwards I talked to their guitarist Brett who told me they would soon be releasing a new album.

Fast forward to about a week ago and the band sends me a digital copy of the new release, their first with singer Claire Carreras, simply titled Life Against Death. Self-titled albums can sometimes be a bit scary for fans as this often times comes with a shift in musical direction. However, in the case of Life Against Death, their sound hasn’t changed much; it’s just simply more of what they do. And to be perfectly honest, they do it very well!

Thrashed up punk and grindcore with a dose of death, the band at times sounds like a cross between Napalm Death and Landmine Marathon – a blur of speed and energy with Carreras screaming out lyrics like “Do you tally your body’s imperfections? What you really gonna do. When you die your ashes turn to dust and everything you own will fall to greedy hands, so get a fucking life just live.”

While the group need to be seen live to fully do them justice, Life Against Death is a solid recording from a band that deserves a lot more attention than they have thus far received. Hopefully this effort is the turning point that will see them finally garner more of said recognition.

Check out the album ‘Life Against Death’