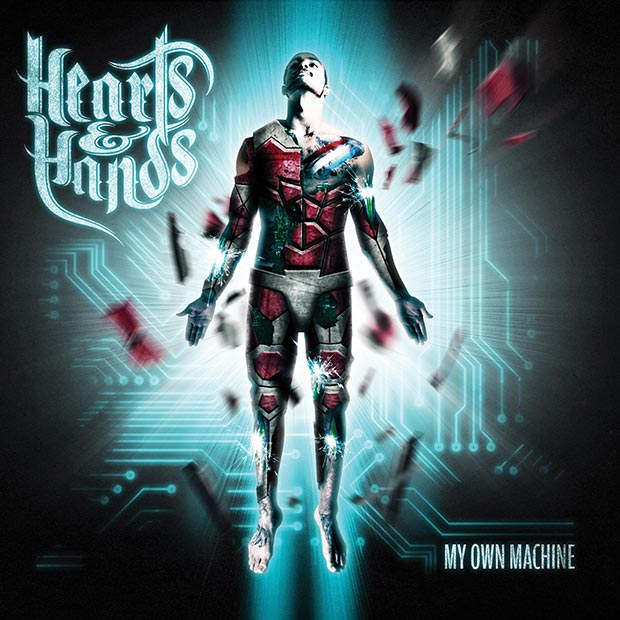 Hearts & Hands, not be be confused with Elizabeth Davis’ fifth edition of ‘Hearts and Hands: A Midwife’s Guide to Pregnancy and Birth’, is a band that has undergone a significant transformation since their self-titled EP in 2012. With the departure of Chelsea Grin vocalist Alex Koehler, Hearts & Hands’ sound has shifted away from breakdowns and screams. Their new full-length LP, My Own Machine, features a wide variety of sonic treats and textures, including effected guitars, acoustics, a handful of momentary harsh vocals, electonica, and if you don’t like it, you’re stupid.

To summarize what makes this album different from a lot of acts that you might associate with their scene, I’ve narrowed it down to one word: cohesion. Sadly, many bands throw several riffs together to make what they call “a song.” A handful of these in a playlist are an “album,” and if you were to shuffle their discography on your iPod, you wouldn’t necessarily be able to tell what songs go with what album unless you’re super-familiar with their work. This album, on the other hand, seems meticulously crafted, from the intro which emulates melodic themes of the first full song to the rise and fall of energy over the course of the whole record.

Garrett Garfield’s stellar performance behind the mic made me think several things. For starters, I couldn’t pinpoint who his timbre reminded me of. Not to say that he doesn’t have his own unique voice, but it did make me think of the singer from Coheed and Cambria crossed with someone else, but I can’t think of who for the life of me… guy from Five For Fighting? Patrick Stump? Don’t listen to me. Regardless, it fits the sound of the band perfectly with melodies that will ring in your head for days. The words “This is the e-e-e-e-e-e-nd” is still resonating inside my skull.

Another outstanding element of this album is the lead guitar. It weaves, not like a hairdresser, but like the shuttles of a loom (I had to Google the movie “Wanted” to remember what that thing was called, and then Google “looms” for how they work). There’s a moment of trem picked delay guitar that gave me goosebumps, and I don’t really favor geese, but I liked this.

What else is there to say? I wish there were more songs. My musical saliva is in excess, and my mouth now tastes funny.

Check out the song “Faith”