…And Justice For Art: “The Chuck Schuldiner Reissues” – An Interview with Death’s former manager Eric Greif

In today’s musical landscape many people believe that physical formats aren’t as relevant as they use to be. Truth to be told, many have succumbed to the temptations of consuming music by just clicking a button on their computers, cell phones, iPods, or whatever gadget they have. That’s maybe why, in order to compete, physical formats have become more interesting than ever, featuring alternative artworks, exclusive content, videos, and in some cases, even out of the ordinary packaging.

Album re-issues are also part of that recent trend, especially in the world of Metal. However, not all of them are put together following the same kind of quality. Some feature very low standards and hope to quickly grab Metal fans’ hard earned money. Others; however, are real labors of love, rich in new information, artwork, music, revamped mixes, and a packaging too good to be ignored.

The so-called ‘Chuck Schuldiner Re-issues’ belong to that second group. So far, they’ve been released in different versions (2 or 3 CDs) and compiled with the utmost attention to detail. Featuring a lavish presentation, they offer a totally renewed take on albums that are today considered classics – like Death’s Human or Control Denied’s The Fragile Art Of Existence.

We spoke with Schuldiner’s close friend and former manager, Eric Greif, about the efforts to bring these new editions to life. Greif, who is in charge of protecting the late musician’s legacy through Perseverance Holdings LTD, told us about how these lavish-looking albums offer a unique glimpse into the life and times of one Metal’s ultimate heroes, who sadly, left this world too soon. 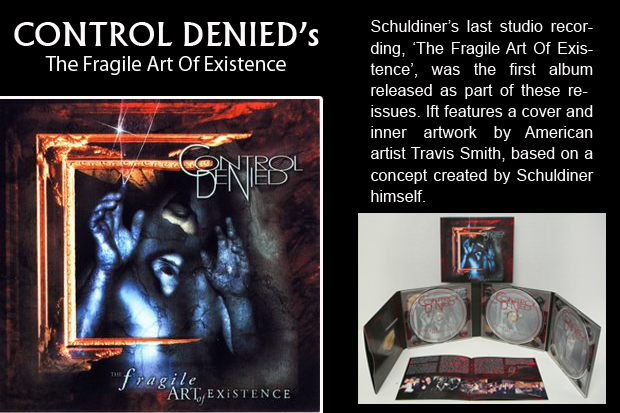 Looking at each one of these re-issues, it becomes clear that you put a great deal of money and effort behind their content and packaging. Is it financially viable, especially nowadays, to put these re-releases together?
Eric: Yes, it works financially for all concerned. However, I don’t get as alarmed about the rise of downloading and file-swapping as others have because I see how many people have been buying the DEATH reissues. Fans want to hold something in their hands, to look at all the extra goodies, and that is just not the same with grabbing a file of album cover art. We strive to make the product as great as it can be, so that everyone says they really got what they paid for and that it was a killer fan experience.

Was the overall budget crucial to make these new editions successful, both visually and sound-wise?
Eric: I suppose so. With Relapse Records and us (Perseverance Holdings LTD), we have spared no expense in the quest to give fans the ultimate product, so I’ve yet to read a single negative comment about the product itself (other than from the tiny minority who object to any reissue or tinkering with the past). However, if you have no money to invest in a release, certainly it will look & sound like shit. That has never been the case with any product I’ve been associated with as that would go against my own ethos about making fans happy. 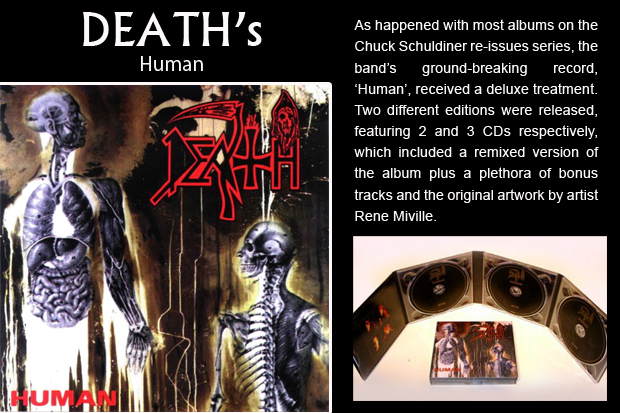 In the case of the Death’s, Control Denied’s and even Mantas’ reissues, people praise the quality and level of detail and amount of material included. In some cases, there are even new mixes and the design and overall look of each album is phenomenal. That proves that you and the other people involved have taken very seriously these projects. Aren’t you?
Eric: This is my life. I have been associated personally with DEATH for 25 years. My job is to preserve and grow the legacy for new generations, and that is exactly what is happening. I want it to be the best that it can be, both in terms of sound and look. I am very gratified that it is perceived as being great, and I know that Relapse feels exactly the same as I do about quality being of paramount concern. As for remixing, I felt that the two albums that required this were Human and Individual Thought Patterns, and this we took a stab at, and I feel they both work. The support from fans has been overwhelming and encouraging.

With so much archival material to choose from… How difficult has been so far, to find the balance on the right amount of visual elements you want to include on these special editions?
Eric: In our case, Relapse’s production manager, Drew Juergens, and I have the final say in working out what ends up on each album. We usually have more than enough material and begin to sift through the contents and come to a consensus about what the whole package will look like in terms of material. So far there haven’t been any major problems or disagreements—they have come together in karmic fashion. 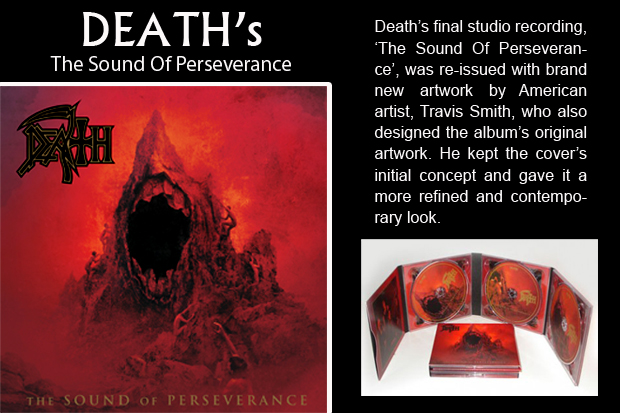 From the very first album of these re-issue series (Control Denied’s The Fragile Art Of Existence in 2010), you included an amazing amount of liner notes discussing many aspects these recordings and Chuck’s life. Do you think these writings and the new photographic material, have contributed to give the music a new context, especially in the eyes of new fans?
Eric: Everyone deserves the best package that is reasonably possible to put out there. I think the booklet for the Spiritual Healing reissue, for example, is 28 pages of vivid color, with four separate liner notes, all the lyrics, an updated credits & thanks list, and literally tons of photos nobody has ever seen before. With a standard reissue having a bonus disc, and with the reissue the same price as a normal CD, it is also incredible value for money. Everyone wins, but especially the thousands of new fans who were barely children at the time DEATH came to an end with Chuck’s passing in 2001. For them it is all a fresh experience, and the enhanced packaging and audio only makes the impact of what they are holding in their hands that much more vital.

Who in your opinion, benefits the most from these reissues, new or old generations?
Eric: I think everyone benefits and appreciates what they are getting for their money, young & old, DEATH old school diehard or novice newbie—it makes no difference. Our goal when planning is to try and please everyone, with the best layout and contents that are possible at that very moment. This grows the brand. 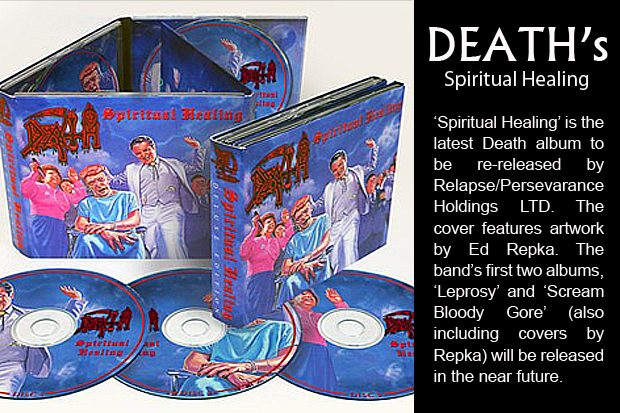 Do you think reissues and special editions like these, are a way to preserve the music for new generations and a vehicle to bring back the presence and importance of physical albums?
Eric: I think for a short while people were just taking music from the net and that they lost the vibe of discovering a new album, holding it and listening to it as an ‘event’. Sales dipped drastically, but have now made a comeback of sorts. I know people surely are buying our product, and it is because we give them something that they want to possess. To have, to hold, to worship.

Now that have been working again on all these material and dealing again with the album artworks, could you tell us what’s your all time favorite DEATH cover artwork and why?
Eric: My favorite DEATH album cover is the new version of The Sound of Perseverance by Travis Smith, because of the magnified detail and the feeling displayed by the artist himself. Travis had told me how personally important and fulfilling it would be to him to revamp the cover from its original form in 1998, and when he unveiled the reissue art, I was speechless. It was utterly fantastic and was a realization of what he’d originally attempted years previously, when he was a younger artist and didn’t quite feel right about what he had created and knew he could better it. He did, and I adore it.

Next Time on AJFA: An interview with Kiss’ illustrator, Ken Kelly
Previously on AJFA: …And Justice For Art: A Conversation with Designer Dusty Peterson