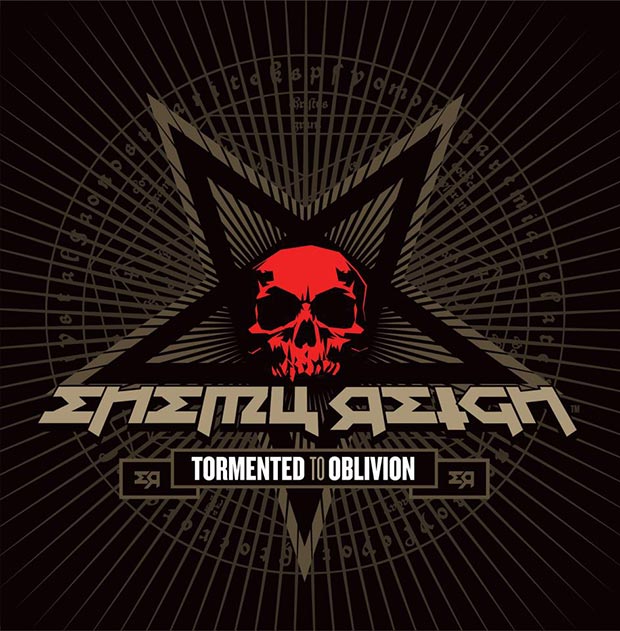 I fucking love it when you get albums like this one from Enemy Reign, the Denver brutalists who cite “Slayer, metal, and shredding” as their influences, because you just know it’s going to be nothing but unashamed, head-smashing brutality. And it is exactly that. There is no “scene” influence on this album. There are no fancy haircuts among the members of these Denver slammers. Nope, this is just four mates from Denver who’ve decided they don’t just want to spend their evenings getting shit-faced and listening to metal, they want to be part of something.

On the downside though, at nearly sixty-seven minutes long, Tormented To Oblivion becomes more a test of stamina past the thirty minute mark, with the last seven or eight tracks becoming something of a mission to get through despite their quality. You see, quality is something Enemy Reign have in abundance. Well, as far as shredding death metal bands go. The production, the musicianship… it’s all pristine, it’s all top drawer stuff which makes listening to the likes of “Tormented Masses” and the fantastic “Haunted” something of a joyful time.

However, aside from their refrained efforts on “Cidium”, there is little in the way of variety to really fully hold your attention. Not that there is anything wrong with the material but, as with most meat n’ two veg death metal bands, variety certainly isn’t the spice of life and you start to find that their relentless bludgeoning becomes something of a struggle to keep up with, which is a pity because from minute one to minute sixty-six, there is absolutely no drop in the quality levels offered up by this quartet.

Where you know you have a problem is when you struggle to find ways to describe their sound because, despite all the obvious Slayer influences to the melodies, the crisp, head-rattling delivery and the wall-mashing heaviness of it all, there is little else to say about Tormented To Oblivion. Still, when a band describes their sound as “metal for metalheads”, it’s obvious that the whole demographic who they’re aiming this record at probably isn’t going to be too bothered by a little thing like originality when quality is usually determined by how sore your neck is afterwards. That be said, if I was marking it on that basis, Tormented To Oblivion would score a nice, fat ten!

Check out the song “Abducted”