After publishing more than 7,000 album reviews and 40 Rock/Metal-related books, Martin Popoff can easily be considered one of genre’s ultimate writers. The Toronto-based author has also professed on many occasions his love for the visual imagery used in Metal and Rock music. In fact, he’s already written several books about the subject, including “Run For Cover”, a look into Iron Maiden’s iconic illustrator Derek Riggs and “Worlds Away”, a book centered on the visuals created by Voivod’s drummer Michell “Away” Langevin.

More recently, Popoff collaborated with legendary visual artist Ioannis (Fates Warning, Dream Theater) on the new award-winning book “Fade To Black: Hard Rock Cover Art of the Vinyl Age”. This compilation of album covers spans the early days of Rock up until the early ’90s. Each visual is accompanied by a short yet engaging story about its creation, or Popoff’s own opinion thereof. Recently we had the opportunity to speak extensively with the ever busy writer about his origins as a Metal fan, his journalistic work, the book “Fade To Black”, and about one aspect of his career lesser known to most of the Metal world: his own passion for painting.

How did you start writing about Rock and Metal?
Martin: I guess I’ve been a fan since 1973 or 74 when I was 10 or 11 years old. Later on, I was a print worker so I got comfortable with the idea of printing and self publishing. So, in 1993 I self published a book of just reviews called “Riff Kills Man! 25 Years Of Recorded Hard Rock & Heavy Metal” and from there on I met Tim Henderson pretty much immediately and we started the “Brave Words And Bloody Knuckles” magazine on my photocopier in 1994. I think that the first book I wrote on a band was Blue Oyster Cult book and it just sat in my computer for five years and I didn’t do anything with it but things just started happening and I ended up on this pace now where I’m writing 2 or 3 books a year. 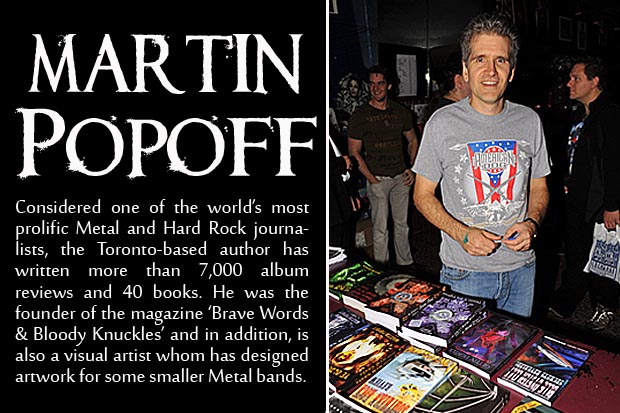 40 books in 20 years. How do you manage to write that amount of material in such a short time?
Martin: I think that recently, given to what’s going on in the music business, a lot of the other jobs have sort of fallen away, like writing liner notes or doing a lot of magazine work and getting good pay for that or writing band bios or any other stuff. I would say the reason is I’m more or less concentrating full time on books. So I guess the other thing is that through all that magazine work I ended up doing lots of interviews so I ended up with a big archive interview footage that I could use for these books. I usually wouldn’t even think writing a book on a band unless I had 20 or 25 interviews with the band.

From where came the idea of putting together “Fade To Black”, your recent book about Hard Rock and Metal album covers?
Martin: Well, I guess this was somewhat driven by Ioannis who actually is a really qualified cover artist. He did a lot of stuff for Metal Blade, Lynyrd Skynyrd, Deep Purple, Allman Brothers. It was more or less his idea and he happened to more or less work out a deal with Sterling Publishing, a big US publisher. His job was to gather the permissions to do all this, which he did, and also I gathered the images. He did work on the front as well and he provided an introduction and a top 100 cover album list as well. So it was a collaboration driven by him and I just love the idea. 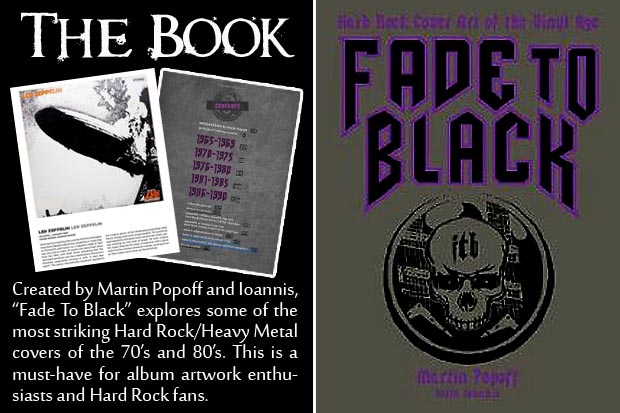 Some of the liner notes and stories accompanying the album covers on the book sound a little like reviews. Was that a conscious approach?
Martin: Actually, I have written probably more record reviews than anybody. I just love the idea of writing reviews about album covers because I’ve had written so many reviews on albums and this was just something a little bit different. It’s kind of cool to write about what you liked about the covers and what they did to you, the emotions that go through your head, you know, seeing the album on the racks for the first time or whatever. How the album cover helps the sales or sends a certain message. Also within the reviews in the book there’s a lot of quotes from the illustrators or the photographers or the bands themselves about the stories behind these album covers. I got a lot of those stories in here along with the reviews. So there’s some substantial writing to this too.

How did you decide which covers you wanted to include in the book?
Martin: Well, the main thing, I mean, it is a book about Hard Rock and Heavy Metal but it’s pretty mainstream, you don’t get too too crazy. Most of the things here are on major labels. At the beginning, there are some covers of the Rock world, so we cheat a little bit with some Rolling Stones and The Who but essentially after that it becomes all Hard Rock and Heavy Metal. I like the idea that this goes from the beginning of the Rock and Roll essentially to 1989-90. 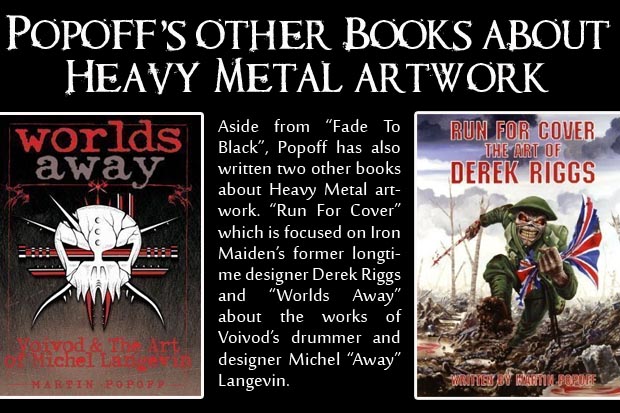 This must have bend a challenging enterprise, getting the right images and achieve this kind of printing quality. How long did it take to put everything together?
Martin: It took a long time to get pictures that were big enough. It took a long time to get good enough images to use and to get all those permissions and do very good scans to get the pictures this good. We didn’t get any of these shots actually from the labels either, I mean we literally had to out and kind of find all of this ourselves and that one was one of the big jobs that Ioannis had. I mean, working behind the scenes he spent a lot of hours on this book, that’s for sure. And you know, it’s a little bit of bittersweet because once we got all these permissions, we essentially have spent all the money we were ever going to make on this thing. But I’m glad it’s out.

The look of the book is very sumptuous, very deluxe.
Martin: You mention the look and design and I think it just won an award for design on the New York Guild. So yeah, it’s an award winning book now, so that’s kind of cool.

In your opinion, what’s the importance of books like this for the preservation of Hard Rock and Metal visual imagery?
Martin: That is a really cool point. We don’t really see these records too much anymore, they’re getting rarer and rarer. Then it was CDs and they were out for a long time and all over the place and you could see the all the covers smaller and everybody complained about that. But even those are getting rarer and rarer now, so it does take a nice tangible book like this to preserve this stuff because, sure you can go to the internet and click Google images or go to Wikipedia and look at the little picture of the album cover but this provides a nice sumptuous very expensively printed, fairly large picture of these things plus a very cool review of them so you can enjoy it in both ways. You can enjoy the picture and you can read about the story behind it so, absolutely you’re right, this is a great way to preserve this stuff. 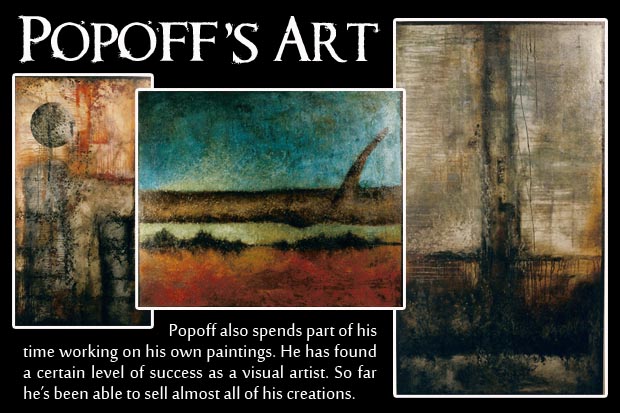 Are you currently working on another book?
Martin: Yes. I just put out that Epic Ted Nugent which is like a close 300 page book biography of Ted. I’m working on a Scorpios one right now, we got other coffee table books right now which I probably should not divulge, but I got 3 books that will be full color coffee table size on 3 different bands. I might do a couple of new wave of British heavy metal projects. I did this series called yield metal where we did 5 books looking at the making of certain albums from the 70s and I keep getting asked to finish finally yield metal 1979 so I might get that thing finished soon. But there’s always stuff coming down the pipe so, like I said, giving that everything is falling away I’m more or less concentrating on books, you know, I should be able to get 3 or 4 books out a year every year.

Many people in the Metal scene know you for your writing but you’re also a seasoned visual artist, a painter in your own right. Can you tell me more about that?
Martin: I think that my greatest accomplishment are the 5 or 6 or 7 paintings that I really like that I’ve done. To me that is way more important than any of the books I’ve done. There’s a lot of texture on those there are a lot of layers, you know, you could probably cut your hand running it across those paintings. There is a lot of layers and if look into it really closely there’s a ton of detail. They’re also very large, I stretch my own canvases. They’re pretty good looking in person, I really do think I love that technique. There’s a painter I kind of studied under who is a very successful painter his name is Drew Harris. I think he lives in Indonesia or Malaysia. I learned a lot of those techniques from Drew and I don’t see a lot other people using them. So I would love keep doing that.

Next Time on AJFA: A Look Back to (some of) Darkthrone’s Album Covers with Drummer Fenriz
Previously on AJFA: “Out Of The Shadows” – Judas Priest’s longtime illustrator Mark Wilkinson talks about his new book “Shadowplay” 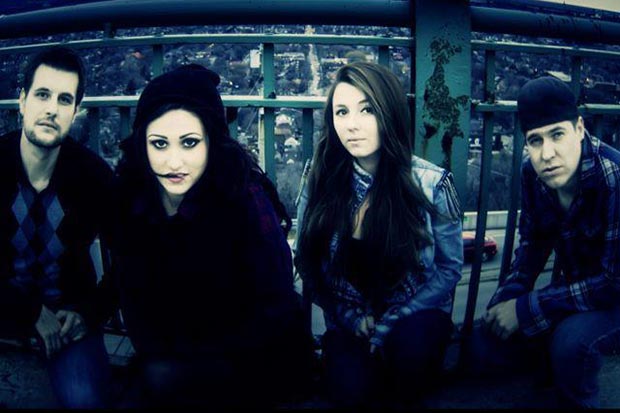 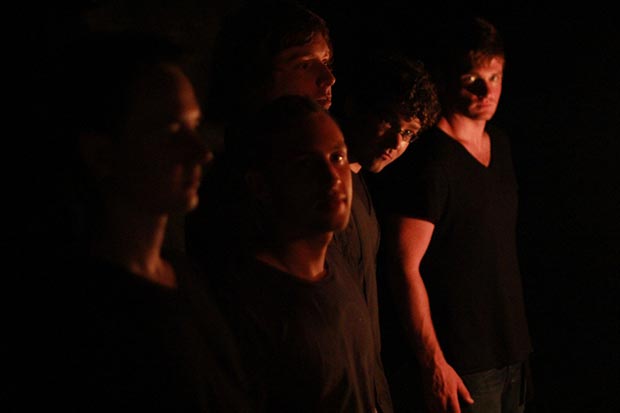