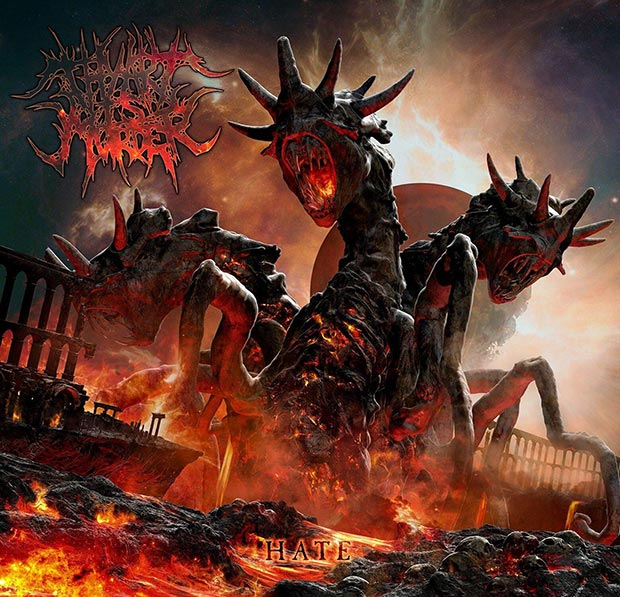 By all accounts, the recent UK shows by Aussie bruisers Thy Art Is Murder were some of the most ear-splatteringly loud that the UK underground scene has experienced in a long time. Similarly, it doesn’t take long into the blood-curdling brutality of Hate opener “Reign Of Darkness” to realise what a dumb-as-fuck move missing those shows was. Okay, so Hate may be a fairly unsurprising listen but, Jesus, there is no denying the fact that these Aussie shredders know how to do heavy.

Of course it would be easy to put Thy Art Is Murder in the same basket as fellow Aussies Parkway Drive, but those thoughts will be quickly banished as “Vile Creations” shows a group who have more in common with Cannibal Corpse and Morbid Angel than they do with Parkway Drive. Sludgy yet viciously catchy, these Sydney heavyweights have been fine-tuning a very vile sound since 2006 and the quality shines through in every second of Hate, especially on tracks like “Shadow Of Eternal Sin” where the band glide seamlessly between passages of outright sickening filth and more tempered chuggery. In fact, it’s a format the band follow throughout the duration of Hate, taking in the whole spectrum of extremity from brutal blast-beats, filthy, wretched vocals and technical fretwork all finished off with a good old dose of horrific, filthy death metal.

A hint of symphonics buried underneath the stench of filth gives an added layer to the sound but, in all honesty, they’re hardly noticeable such is the carnage being created when the band hit their groove on tracks like “Immolation” and “The Purest Strain Of Hate”. Often bands fail to live up to their names but, in the case of Thy Art Is Murder, they’re about to unleash their fury on an unsuspecting public. Be prepared for ridiculously high body count.

Check out the album ‘Hate’