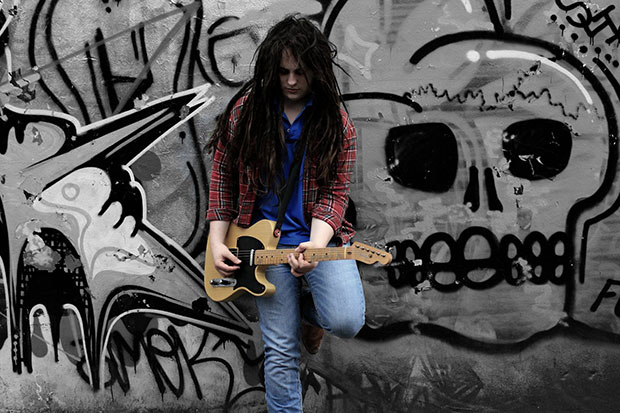 Interview with Chris Buck; the guitar virtuoso talks about his new album ‘Postcards From Capricorn’

“This guy is a fucking awesome guitarist!” That’s how renowned guitar god Slash describes Chris Buck’s soulful playing. Just a quick listen to his brand new album Postcards From Capricorn and it’s instantly confirmed that this South Whales native is one of the most promising Rock/Blues-based emerging artists of this millennium. Not in vain, he’s been signed to Tru-B-Dor Records, the new label of former Guns N’ Roses manager Alan Niven. In this exclusive interview Chris talks about his style, his band “The Big Horns”, the new album, and being compared to Eric Clapton and other six string heavyweights.

Your new band, Chris Buck and the Big Horns, came together relatively quickly. How did that happen?
Chris: I guess the germ of the “Big Horns” idea dates back to November 2011, following the split of my previous band, TH3. It was a rather sudden, ill-timed demise (only a month before we were scheduled to record our debut record) that nobody had foreseen so it obviously had fairly disruptive consequences. Luckily, my management were slightly more composed about the situation than I was and within a matter of days, a flight from Heathrow to Phoenix was booked, along with some studio time. I touched down on my 21st birthday and after a couple of phone calls, the Big Horns that you hear and see on Postcards were wrangled together; Tony Montana on vocals, Jimmy Mack on bass (who has played with Sly Stone, Stevie Wonder, and Richie Havens) and Michael Thompson on drums – absolutely phenomenal musicians who I’m honoured agreed to play with some hairy Welsh dude on the rebound! And thus, the Big Horns were born!

Your music is deeply rooted in Blues/Rock. Can you tell me more about your writing process, inspirations, etc.?
Chris: Yeah, blues has always been a massive thing for me. It’s the first music that I really remember latching onto from a relatively young age; that visceral, moonshine on the fire of a broken heart sound that the best guys get across on record so eloquently. It’s so simple, yet to do it well is so difficult! That’s the paradox that grabbed me from the first couple of notes of Elmore James’ “It Hurts Me Too”. As for my inspiration, anything with passion and soul, whether it’s Otis Redding or John Martyn. If it’s genuine, heartfelt and musical, I’m sure I’ll get off on it.

Check out the cover of the Rolling Stone’s “Miss You”

Your new album Postcard From Capricorn is terrific. It has a certain 70’s and 80’s vibe, but somehow it sounds modern. Was that a conscious approach from the very beginning, to make it sound fresh?
Chris: Thank you very much! I think the sound of the album is extremely indicative of the manner of which it was recorded; entirely live by a bunch of guys getting to know one another (musically and personally) and having a blast in doing so. When we entered the studio we had very little idea of what it was that we would return with. We had a narrative that we wanted to convey and we knew how we wanted the album to sound. The rest was down to fate. We set up our gear, dimmed the lights and just played for about 2 days straight. Doing that with such sharp musicians is an incredible experience; without trying, we forged a really intuitive musical connection that I’ve not got with guys I’ve played with for years. That’s what I wanted to capture on tape – that subconscious connection and vitality that I was hearing in those initial jams.

Can you tell more about the recording process and working in the studio? How was the whole experience for you?
Chris: The recording process was great fun. The uncertainty of everything was rather daunting initially, but once it became apparent that we’d come out with something we were proud of irrespective of the circumstances, the freedom of the situation was really invigorating. With TH3, every last nuance of every song had been honed from months of rehearsals and live shows. That’s obviously a facet that comes with time, something we weren’t particularly blessed with in recording of Postcards. It was evident that we wouldn’t have the time to sit down and write a record so we set about building a collection of songs that were cool to play and told the narrative of the record I would have written myself given the situation I was in at the time. It was incredibly frustrating to have everything I’d worked for taken away at the last hurdle, but I never wanted Postcards to feel negative in anyway, which is why we chose “Out in the Cold” to close it; I think that track is really representative of the record’s whole outlook. “Sure, it’s a kick in the teeth but I’ve dusted myself off” kinda thing…

There are some songs like “Out In The Cold” or “Blue Blood” that are more straightforward hard rockers. Meanwhile, tracks like “Oh Well” or even the intimate ballad “Still in Love With You” have a more jam-like feel specially towards the end. Was it difficult to maintain a balance that allowed the album to flow naturally from rockers to jammers?
Chris: Not as much as you’d expect, actually. The beauty of working with such a great bunch of guys is that songs take shape very quickly once the nucleus of an idea is there. It soon becomes evident what a song needs and in which direction it feels most natural to take it. Ironically, having such unimpeachable recordings of “Still in Love” and “Oh Well” hanging over your head is quite liberating too. You know you’re not going to better them; you can merely give your interpretation whilst being deferential. Once you’re okay with that, it’s great to fun to tackle such classics. 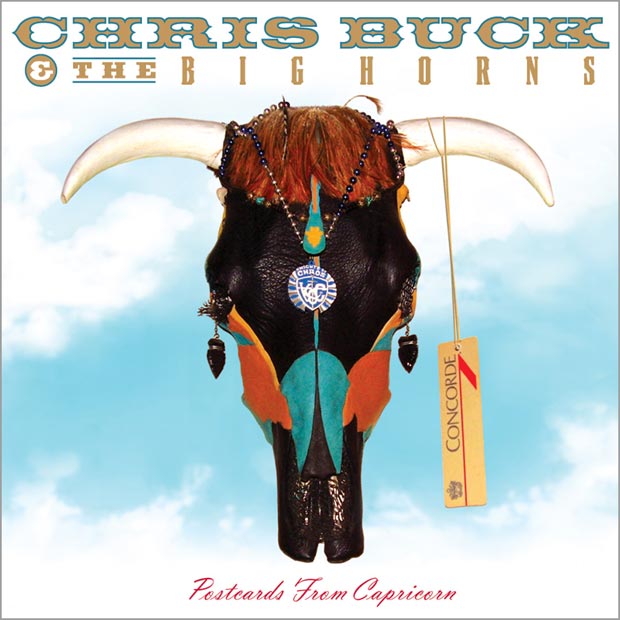 You’re one of the first bands signed by the young label Tru-B-Dor Records. How did you become involved with them and with former Guns N’ Roses manager Alan Niven?
Chris: My relationship with Alan and Heather stretches back to around 2007. Heather actually stumbled across me playing on YouTube; a cover of Guns’ “Mr Brownstone” if memory serves! I guess she must have been impressed being she coerced Alan into having a look and we’ve been friends ever since. I owe them a hell of a lot. I’m not really sure where I’d be or what I’d be doing if serendipity hadn’t put me on their computer screen 5,000 miles away. Madness, when you think about it…

I imagine that being one of the label’s main acts so far, puts some extra pressure on the band and the album’s success. Is that the case?
Chris: If it does, I haven’t felt it! Tru-B-Dor have been nothing but wholeheartedly supportive of me since the moment I met them and it’s an honour to be part of a label whose ethos is rooted firmly in the artist’s development and not in making a quick buck, if you pardon the pun! It’s a long road with many bumps to trip you (as I’ve found) but we’re not racing anyone. I have every intention of being around for a long time and I don’t think there’s a better label out there at the moment to help me achieve success and longevity.

For those who haven’t listen to your music yet. How would you describe both your writing and playing styles?
Chris: Electronic folk, with a hint of West Coast hip-hop circa ’94. Ha! Seriously though, I’ve never liked the confinement of genres but if pushed, I’d probably say straight up blues/rock. With some West Coast rap thrown in, obviously…

You’re basically a soloist. Is it difficult for you to create a balance between the guitar and the rest of the band’s instruments or with the vocals while you’re playing live or recording?
Chris: From the moment I’ve been playing live, I’ve always been very aware of where I’ve sat in the mix. Not just technologically, but musically. TH3 was a great learning curve in that sense; knowing where to sit back, knowing where to dig in is integral in a trio. Growing up idolising Hendrix, Clapton, Slash and SRV, you can’t help but be aware of dynamics and how the smallest of inflections in their playing dictates the band’s feel. Stevie Ray has always been the master of that for me; half brutal force, half finesse but with such effortless ease and grace. When you’re such an avid fan of live records and every bootleg you can get your hands on, balance and dynamics is always going to be something you’re aware of. It’s just a case of absorbing it and incorporating it into your playing with as little conscious thought as possible. It’s an ongoing battle, but it gets easier.

Check out a sample from the album ‘Postcards From Capricorn’

Certain aspects of your playing have been compared to Clapton. Slash has endorse you big time too. How do you feel about it?
Chris: So, so humbled! Like I said, they’re both guys that I’ve grown up idolsing and inevitably at some point, tried to emulate. So to have comparisons drawn is immensely flattering… and to have Slash introduce you to 10,000 people as an “awesome guitar player” is just off-the-radar surreal! I don’t think I’ll ever quite fully comprehend that moment. Such an incredible honour. As my manager Alan reminds me, “better than being blessed by the Pope on Easter Sunday!”

The album’s physical packaging is really luxurious, it even comes with an extra DVD. That’s rare, especially for a new band in this digital age. Any comment on that?
Chris: Thank you! I’m glad people are enjoying it. The quality of packaging of records is something that I think has slowly been in decline. Being 22, it’d be disingenuous to claim I preferred vinyl, but I think there’s definitely something to be said for the sense of occasion of pride you get in owning and playing a vinyl record. The thought and artwork that typically went into the liner notes is something that you rarely see in the digital age, so I think it’s really cool to have created something that makes it worthwhile owning a physical copy. I’m incredibly proud to have my name (and face!) on the front of it!

Do you have touring plans anytime soon?
Chris: Definitely! Obviously, the Big Horns you hear on the record are all based in the US whilst I’m still living in the UK, so there are certain obvious logistical issues of rehearsing and gigging on a regular basis. But I’m in the process of finding the right guys to form the UK Big Horns, if you will, with an aim to get out there and play the record live as well as get back to the grind in terms of original material. As soon as all the pieces are in place, I’ll be playing as many places as physically possible. The material comes to life in a live atmosphere!