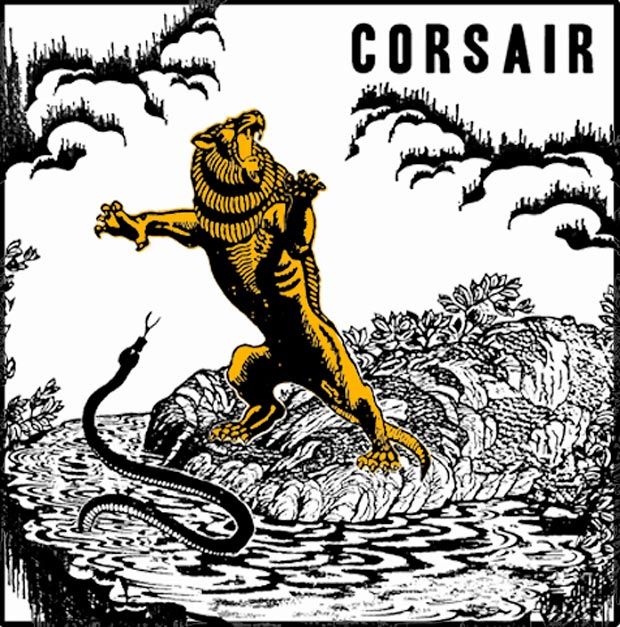 I have to admit, I wasn’t expecting much from Corsair. While the band’s bio stated the usual positive things such as “innovative and tuneful” and “captured the attention of critics from around the world”, the thing that caught my eye was that the group was born out of a Black Sabbath tribute band. As a result, I figured I was going to be getting a third-rate Sabbath bar band and turned on their self-titled album with little hope.

After the opening instrumental “Agathyrsi” blasted out of my speakers; however, I felt hopeful that the album wouldn’t be too bad – this first song was actually pretty damned good. Nice traditional metal with some good hooks to it, kind of proggy, but metal through and through. Not what I was expecting, but good.

What happened over the next thirty minutes was a mind-blowing trip with classic metal befitting of the greats. Thin Lizzy-ish vocals, Maiden guitar harmonies, and the heaviness of early Sabbath. The songs on the album are like sweet manna from heaven to anyone who appreciates the more traditional metal sound.

Thin Lizzy especially is brought to mind on tracks such as “Chaemera”, which sounds like a laid back version of “The Boys Are Back In Town”, while “Gryphon Wing” is more Lizzy with a dash of Vol 4-era Sabbath. Don’t get the impression that Corsair are a tribute band though. Instead get the idea of a group of musicians channeling classic heavy metal and morphing it into something new and satisfying.

Corsair proves that traditional metal can still sound fresh when played well and with sincerity. As a result, they have crafted an undeniably excellent album that I will be listening to again and again.

Check out the album ‘Corsair’