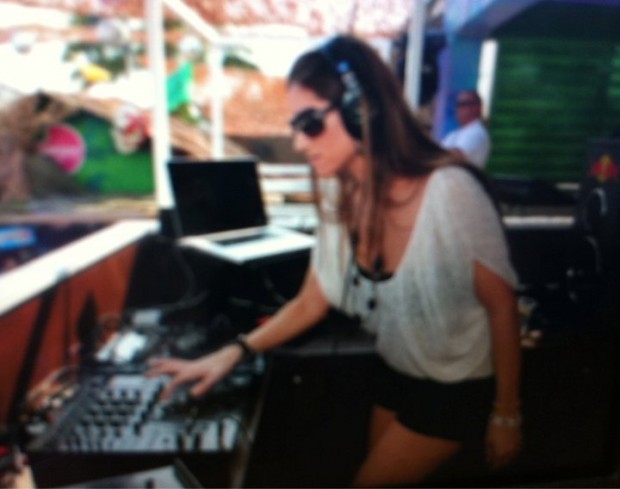 Recently we had the opportunity to speak with Aruna, the legendary trance vocalist, songwriter and more recently, DJ. Read up on a lot of interesting things you may not have known about Aruna.

Hi Aruna, it’s a pleasure to chat with you! As this is your first interview with MaxMuzik, let’s start off with a little background. How did you get into music?
Well that could be a long answer, it’s been quite a journey already! I started playing piano when I was five, started taking lessons at seven. By nine I was already singing and writing songs (probably not very good ones!) but by the time I hit thirteen I decided I wanted to be a session piano player. So I started studying jazz as well as classical and practicing seven hours a day. I ended up attending Berklee College of Music to further hone my skills but while there realized that it was singing and writing that turned me on more than anything. I knew if I didn’t go for THAT 100% I would regret it in the end. So I started pursuing the path of pop artist, even ended up writing a song for Hannah Montana but later fell into EDM by accident. The reaction was so strong and I quickly developed such a love for the music that I decided this was where I wanted to be…although I still do pop writes for other artists. It can be a very lucrative venture if you land a big cut!

Can you offer insight into some of your musical inspirations, both vocally and musically?
Imogen Heap is definitely at the top of the pile. Not only is she incredibly talented as both a singer, writer and producer but she has such a unique sound and melodic language. I always say that’s the true hallmark of a real artist. You know who’s singing within three seconds of hearing them. I also drew a lot of inspiration from the singer/writers of the Lilith era — Shawn Colvin, Sarah Mclachlan, Tori Amos, Paula Cole, Jonatha Brooke. I really hope that estrogen-fueled, organic sound makes a comeback soon. The world is desperately in need of some of that, it’s gettin’ kinda crazy out there!

Back in October, you released your single “Save The Day” following by two remixes from Tom Fall and Tony Arzadon. What was that experience like for you?
I’m very proud of how that track came out, but it was quite a lot of work to get there…then again it usually is! The writing started a little over two years ago while I was staying with Myon in Hungary for three weeks. It was a really creative period for both of us. We were working on three different tracks at once, “All Around You”, the one that came out on Cosmic Gate’s album and also another tune which will be Myon & Shane’s next single, out in early 2013. I came up with a chorus that I LOVED and showed it to Myon for their single. He felt it was a bit too commercial for theirs but said it could be great for mine. So basically I built up the whole rest of the song around that chorus. Those two remixes you mentioned came later, once the version that Myon and I did was complete. Tom ended up completely redoing his mix from scratch three times, he really wanted it to be right, and I love when someone is so committed to doing the best possible job like that. So it did end up taking a while but I really love what he did and it slams in a club, totally worth the wait!

What was the idea behind forming “Velvetine” with Myon and Shane 54? How was the working experience with them?
We decided to form Velvetine because in the process of working on our first track together, “Helpless”, we realized that we all have this creative urge to make something a little different from typical club tracks, something more musically sophisticated, where we could stretch our legs more. We all have such diverse backgrounds in terms of what we like to listen to, so were looking for a more artistic project to pour ourselves into. Also for me I was looking to get away from the whole ‘featuring’ thing, I wanted a format where all of us were equal. I love working with them because more than pretty much anyone I’ve worked with, they really respect me as a musician, not just a singer, so the writing is very organic and collaborative between all of us from the ground up. Often I’m contributing things like chord progressions, chord voicings, piano parts, etcetera to the track as its being worked on, so it really feels like I have a big stake in the final product, like it represents my vision much more fully than a track where someone hands me a finished instrumental to write over.

You started your podcast “The Hot List” in 2011, and you bring your own unique female perspective to your track selection. How’s your experience so far and how do you pick your tracks for the show?

I actually love working on it, I find the process really creative and fun, and the response has been fantastic. People that know me well call me a ‘musical snob’ because I’m very picky and opinionated about what I like (and what I don’t!), so the show gives me a great opportunity to showcase my taste and really collect and curate the best of the best of what’s out there. A lot of people might be surprised to find out that usually I don’t play a lot of vocal tracks on the show, maybe two or three tops. And the reason is simply that I just don’t find a lot of vocal tracks that I feel proud standing behind. But generally speaking the way I select is as I’m checking promos, I wait for that little tingle that perks my ear up, it’s hard to explain but you know it when you hear it. I also make my own mashups for the show sometimes, which is a lot of fun, getting instrumental mixes of tracks where maybe the vocal isn’t as hot as it could be and replacing it with something better, it’s kinda like taking a girl who’s pretty but has bad clothes and hair and giving her a makeover! Fun stuff!

Your first official guest mix which was on TATW #440 was a blast and shortly after, “The Hot List” became the #14 most downloaded podcasts on iTunes. What was your reaction/thought when you saw it passed big name DJs like David Guetta and Ferry Corsten?
I was in complete shock, like I really couldn’t even believe my eyes! Honestly that moment, for me, was one of the most significant and proud milestones of my EDM career thus far, because it felt like I had taken on the big boys at their own game and was finally standing shoulder to shoulder with them. I’m not sure any other female has done that before, at least not in trance. Being a singer is great but you’re viewed differently than the DJs are, kinda relegated to the sidelines in a way, which is one of the reasons I started DJing in the first place. I know, with all the years of musical training that I’ve had, that I have a lot more to offer the world than just a pretty voice, so yes it was very, very validating. It’s sad to me that there aren’t any female DJs in trance that can stand toe to toe with the top guys in terms of respect and marquee value. I think its slowly starting to change though, and I will be working hard the next few years to continue to help clearcut that path. If it makes it even a little easier for talented women in the future to be seen and heard then it was worth the effort!

If you could open up for an artist right now, who would it be and why?
Well truth be told, I’m not a big fan of opening up for anyone! I like to play pretty hard when I spin, which of course you can’t really do if you’re playing before a big A-lister. But in the right environment playing a bit more proggy can be fun, like if its an outdoor show by the beach, maybe during sunset. In that instance I wouldn’t mind. Opening for Above & Beyond would be really cool. I have such massive respect for them, everything they do is so classy and tasteful and they’re very careful about who they work with, so setting the stage for one of their sets would be a big honor for sure.

Speaking of shows, what are your touring plans for the rest of the year?
Asia seems to be a pretty good market for me lately. I had two shows in Indonesia in November and as we speak am on my way home from a New Years Eve gig in Phuket, Thailand. It was my first time there and I had been wanting to go there for a long time. They were nice enough to give us five days there and they put us up in this beautiful resort, so it was almost like a mini-vacation. Myon and Shane and Tydi played too, it was a lot of fun getting to hang out in such an exotic place with all of them.

What artists would fans be surprised to find on your iPod?
I’m sure most people would be pretty surprised to know that I listen to a lot of pop and R&B and even some hip-hop. I have some Ne-Yo floating around, Bobby Valentino, Craig David, some Janet Jackson, even Fergie. Some of it is just guilty pleasure listening but a lot of it is research, as a pop writer of course you have to stay current on what’s out there. The writing style on mainstream pop records has changed quite a lot in the past ten years. It’s very rhythmic and highly lyric driven now. I’m not a huge fan of Kesha or artists like that but I do enjoy and admire the lyric writing, its very fun and tongue-in-cheek but still really clever and well crafted at the same time.

Any final thoughts or parting words?
2013 is going to be a very busy year for me, and from the projects I already have on my plate it seems I’ll be stepping into some new musical directions, diversifying a bit. So don’t be surprised if you see my name popping up in some unexpected new places…and don’t worry that it means I’m leaving trance or any of this nonsense! It’s my way of evolving and keeping things challenging and interesting, but trance will always be a part of what I do. For the latest on what I’m up to, new releases, live dates you can follow me on Twitter at @arunathesinger. I’m kind of addicted to it, so rest assured you’ll see some random silly musings or funny photos pop up on my feed from time to time as well. Thanks for all the support in 2012 guys, I’m looking forward to jumping into this new year with both feet, its only upwards from here! xoxo

Thank you very much Aruna for your time and good luck in 2013!