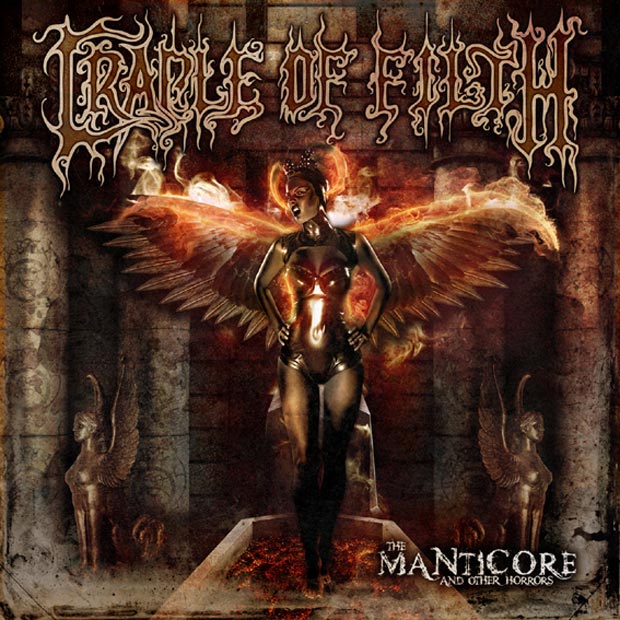 Cradle of Filth – “The Manticore and Other Horrors”

I’ve never understood the hate that Cradle of Filth gets from some segments of the metal community. I can’t even count the number of times I’ve seen the band referred to as “false” metal or as “not really metal” even though the band still has the black metal sound as its core.

While I am aware that many non-metalheads are into the band for the more goth image that they portray, this really shouldn’t discourage the more hardcore from checking them out. In the last few years since Thornography, CoF has gone back to a more black metal sound and the resulting albums have all been quite good in actual fact. Not classic material mind you, but good.

This said, while The Manticore and Other Horrors won’t win any points in the originality department, the release is quite solid all around. Despite repeated comments on internet message boards that Dani can’t scream like he used to, I really couldn’t notice much of a difference in his singing style – his screams on the song “Manticore” for example, sound like the Dani of old to me.

Song-wise the album stands up throughout with songs that you would expect from Cradle of Filth – in other words blackish metal with symphonic elements. While the songs really aren’t different style-wise from previous albums, they are solid. If you’re already a Cradle fan you pretty much know what to expect from this, and if you aren’t. well this won’t change your mind. For the few of you who haven’t heard Cradle of Filth, The Manticore… is a decent album that will give you a great introduction to a band that has consistently produced quality releases.

01. The Unveiling of O
02. The Abhorrent
03. For Your Vulgar Delectation
04. Illicitus
05. Manticore
06. Frost On Her Pillow
07. Huge Onyx Wings Behind Despair
08. Pallid Reflection
09. Siding With the Titans
10. Succumb to This
11. Nightmares Of An Ether Drinker
12. Death, The Great Adventure
13. Sinfonia

Check out the song: “Frost On Her Pillow”