…And Justice For Art: “Motorized” – An Interview with Motorhead’s Longtime Illustrator Joe Petagno

In 2005, legendary North American illustrator Joe Petagno published via Feral House the book “Orgasmatron: The Heavy Metal Art of Joe Petagno”. The impressively-illustrated volume compiled some of the most outstanding, eye-popping works the designer had produced for bands such as Vital Remains, Angelcorpse, and of course, Motorhead.

In the ’70s, Petagno spawned for the British trio, the now legendary Beast known as Snaggletooth. This would eventually forge a successful professional relationship between the two that would endure for more than three decades. These days, while Petagno prepares a new book completely dedicated to our beloved Snaggletooth he chatted exclusively with us for PureGrainAudio.com’s “And Justice For Art” series about his career, his 2005 book, and what he has in store for the near future. Read closely and beware of the DA SNAG’ ! 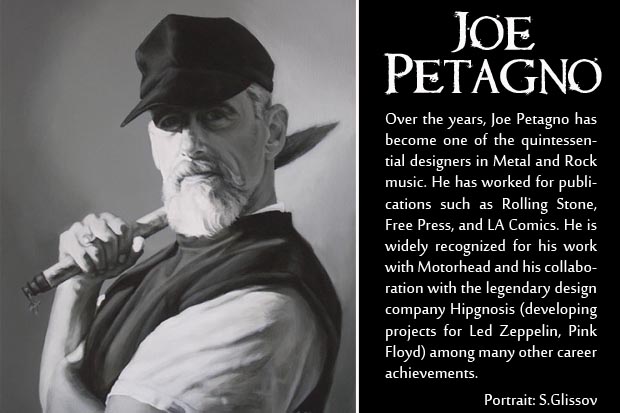 Do you remember how your career as a commercial visual designer began and eventually developed?
Joe: Actually, I started my career in 1968 and quickly established myself as one of the leading American Underground Artists working out of Los Angeles, working for Rolling Stone, the Free Press, The Oracle, LA Comics, One stop Posters, Saladin Posters, and a host of others. Time magazine in Summer ’71 labeled me as a debunker of childhood fantasies due to a poster I did featuring some Disney characters smoking a hook entitled “Ain’t Gonna Work On Dizzies Farm No More”. Meanwhile, I had been spending Summers in Britain working with the London underground IT, Big O Posters, Time out, Oz and, Cozmic comix. In 1973 I took up residence leaving L.A. with a large number of black light posters, comics and sleeve designs to my credit, Alice cooper, Captain beyond, West Bruce and Lang, etc..

In the 70’s you also worked with the design powerhouse Hipgnosis, who were widely known for their works for Pink Floyd, Led Zeppelin, and other artists. How did you become involved with them?
Joe: I called Storm Thorgerson (one of the Hipgnosis masterminds) and asked him if he would be interested in collaborating. He said my reputation preceded me and that I would be more than welcome. For two years we collaborated on a lot of work together, including the Swan Song logo for Led Zeppelin, tour comics for Pink Floyd, covers for Roy Harper, Nazareth, etc. All the while working with my own clients doing scores of SciFi book covers, record sleeves, and editorial work.

Let’s talk about your 2004 book “Orgasmatron: The Heavy Metal Art Of Joe Petagno”. From where did that idea come? Why did it take you so long to put a book together?
Joe: It seemed like a logical thing to do at the time… why it took so long… I’m always busy with a million things… but I was prompted by fans, friend and family, so I went with it. 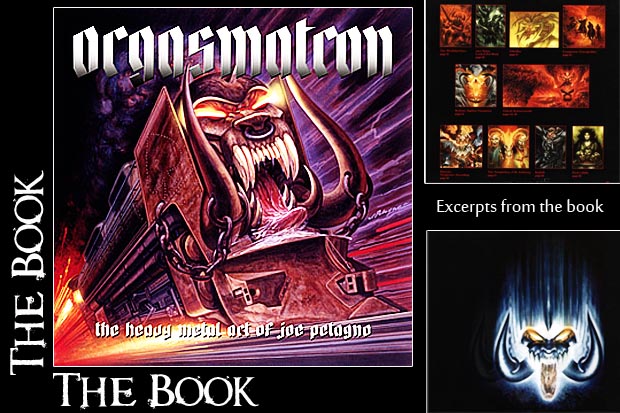 How long did it take from the time you began working on the book until you had the finished product in your hands?
Joe: The Art work in “Orgasmatron” spans about 15 years, but the book itself only took a few months to complete… it was published a year later by Feral House… the only house with balls enough to do it.

The book covers plenty of your work for many Rock/Metal bands like Motorhead, Vital Remains, Angel Corpse, etc.. At what point in your career did you become interested in doing album covers for this kind of music?
Joe: I was always at the extreme end of things, provoking the status quo etc. I mean, let’s face it, my work is not for the faint, so it goes without saying that I was going to get along with like-minded individuals and Metal is full of them. 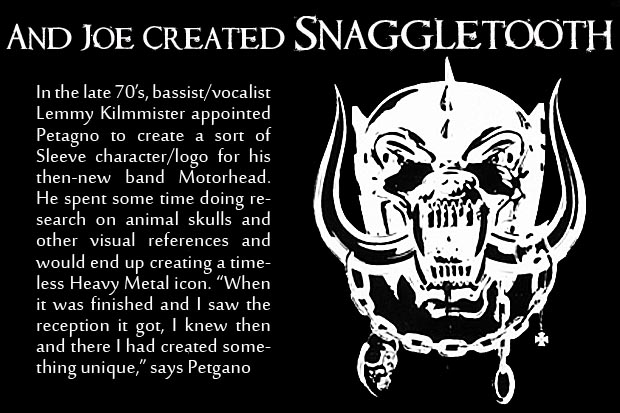 Your work is usually based on dark fantasy/esoteric themes. How did you develop the interest for this kind of imagery?
Joe: I don’t know… it comes with the territory I guess. You either have these leanings or you don’t.

Do you think this book is the best document to showcase your legacy as a visual artist?
Joe: Yeah, I think it sums up my work from that period. You’re always moving as an artist, and I rarely look back… but yeah, I’m relatively happy with it.

In the book‘s foreword, Lemmy writes very nice things about you. Do you think your work for Motorhead has been essential in the development of your career and style?
Joe: Lemmy and I were similar to our views of reality. I wouldn’t give him/them that much credit to say they were an essential part of my creative development. After all, Snaggletooth is my invention, I was essential to Motorhead giving them such a strong identity over the years. After all Snaggletooth is a graphic entity, ocular and not oratory. 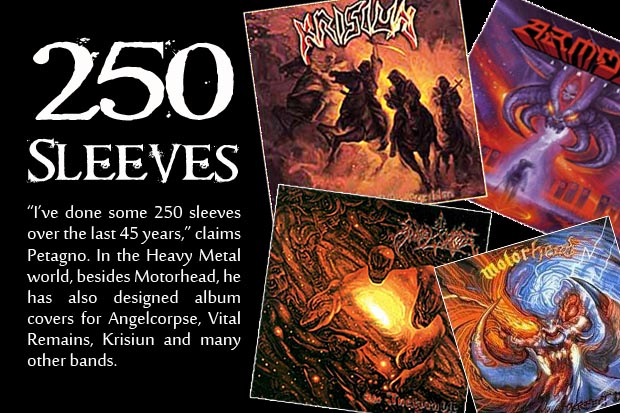 As a book, “Orgasmatron” is a must-have for Metal fans and illustrators. How have people’s reactions and feedback to it been so far?
Joe: It’s been good, it was published in 2004 and it’s still out there. I guess people dig it.

Can we expect a “Orgasmatron Volume 2” or a expanded edition of the book in the future?
Joe: I’m currently working on a book of Snaggletooth Art. There was about 18 pieces of Snag Art done for the band. I have over 100 paintings of Snaggletooth done over a period of 38 years since 1975 which I am going to showcase in this new book which will be published next year.

Of all the artworks you’ve created through the years, do you have a favorite?
Joe: I’ve done some 250 sleeves over the last 45 years and I don’t really have a one time favorite. I just keep movin’ forward!

Next Time on AJFA: A Guide to (some of) the Best Metal Album Covers of 2012 (Part I)
Previously on AJFA: “Beyond Time and Place” – A Conversation with Artist Paul Raymond Gregory