Welcome to the third installment of “Metal Artists’ All-Time Favorite Album Covers”. While last week we were under the impression that this would be the final part of our mini-series, we realized that we actually had enough sick content, to bring you a fourth part! So sit back and relax, ’cause you still get to do this once more! For now, read on and see what members of Attika 7, Black Tusk, Phobia and Tragedy, among others, have to say about those album covers that forever changed their lives.

01. Tektur – Neuronia (vocalist):
“My personal favorite artwork is the cover of Slayer’s Seasons in the Abyss (not to mention that it’s one of my favorite records as well) designed by Larry Carroll. All four Slayer album covers that he designed are just jaw-dropping – it’s like the mysticism and brutality of Hieronymus Bosch’s works are intertwined with the intensity of Edward Munch with a maniacal, mentally deranged twist. Although not so fine tuned and “artsy” as the covers of the two albums before (and maybe it is the reason why), Seasons… just hits you with its in-your-face horrific intensity, right on from the skull’s haunting eyes, oozing with horror, insanity, but also profound sadness.

It just goes straight to the brain: mankind is on its way to hell, led by psychopaths and controlled by religious freaks. The schizophrenically painted background just adds to the general feeling of doom, darkness and rot. It’s like all cemeteries of the world have turned into smoke-churning factories, puffing away, grinding the bodies of the dead and transforming them into a huge mass of smoke, polluting the skies over our heads. No place to run, only to stare in horror into the face of the sad, insane demon, spitting lost souls into the bottomless pit. Magical, horrifying, saddening – pure genius.” 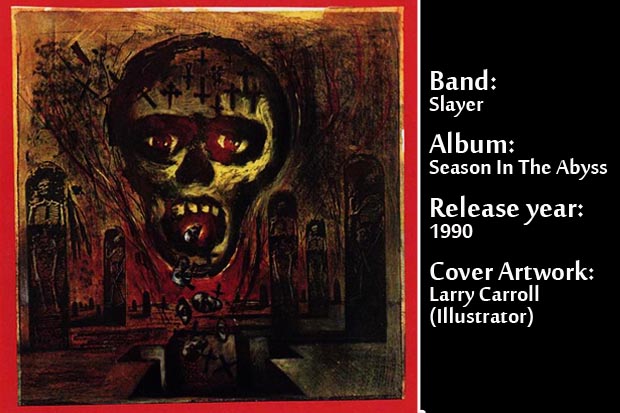 02. Shane – Phobia (vocalist):
“I would have to say Back in Black from ACDC! Because I believe when you see the cover, it’s an introduction that lets you know that what you’re about to hear is 100% evil rock and roll, and it needs a fancy cover to compliment the sound you are about to hear!” 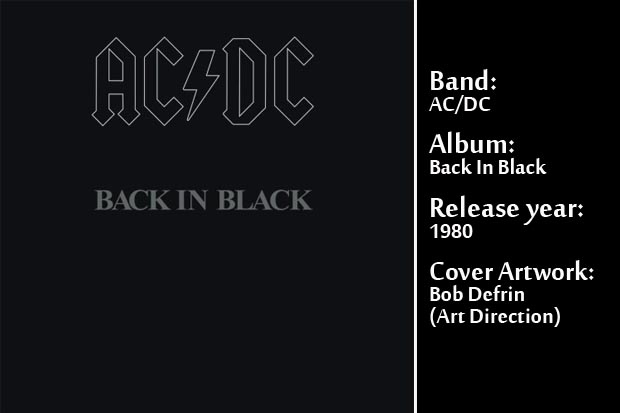 03. Leon Del Muerte – Murder Construct (guitarist, vocalist):
“Carcass’ Symphonies Of Sickness is actually a terrible, awful album cover. Up until the point I saw it though, everything else had been Ed Repka, Andreas Marschall, Pushead, etc… It had the distinction of shocking the absolute shit out of me. Even looking at it now, I’m totally giddy to throw it on again. I remember pulling it out of the tray of used CDs at some music store on Noe St. in San Francisco, not really being able to suss it out and putting it back. Then, a minute or two later, I pulled it back out and was like ‘WHAT THE FUCK!’ I couldn’t believe that anyone could get away with it. Even holding it felt like some kinda minor crime. Of course, I had to buy it immediately knowing full well that my mom was just gonna look at it, then me and shake her head and say ‘Oh, Leon…'” 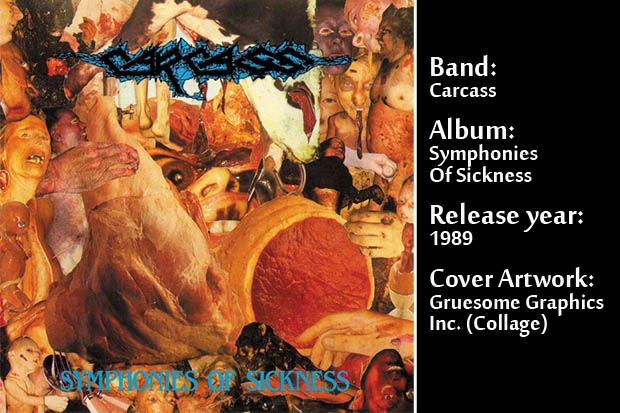 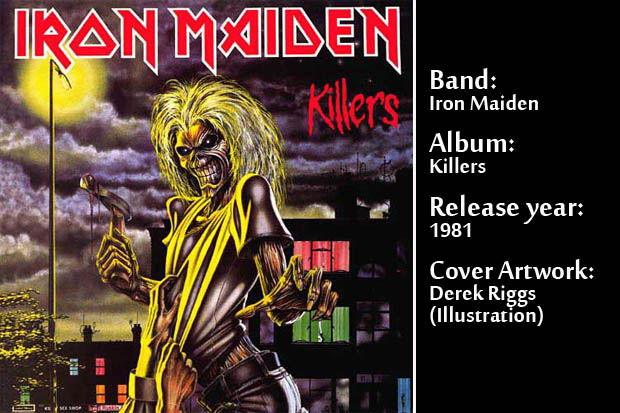 05. Lasse Pyykko – Hooded Menace (guitarist):
“I think I will go with Killers by Iron Maiden though because of the exceptionally strong nostalgia that I feel for this art. As a kid I was a bit scared of it. Every time I played the record, and still to this day, I can feel the dark and brutal, homicidal vibe of the artwork. Especially the intro of the album title song matches the cover art perfectly. It’s shuddering stuff! Eddie is a legend. Derek Riggs is a legend. Maiden and Killers are legendary and for a reason.”

06. Bryan Holland – Reverence (guitarist):
“I always loved Savatage’s Gutter Ballet cover art. At the time this artwork was different than what a lot of metal bands were putting out and totally different than anything the band had put our previously, including lots of intricate details from gargoyles and ghosts to the skeletal candelabra. I especially loved how it was dark and haunting with a distinct feeling of opulence and grandeur, yet had a classical feel to it which fit with the music perfectly.” 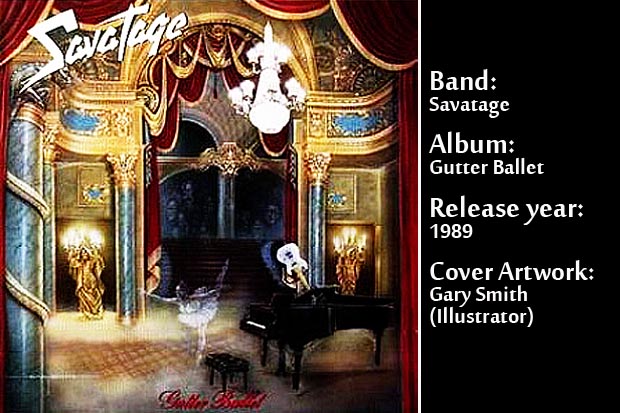 07. Daniel “Machine” Batista – Tragedy (drummer):
“One of my favorites is the cover of Cannibal Corpse’s latest album Torture. Certainly it’s a very good, classic artwork. It allows me one more time to delight myself with the imagery of artist Vincent Locke. It’s also very consistent with the music, very brutal and… gore is everywhere!” 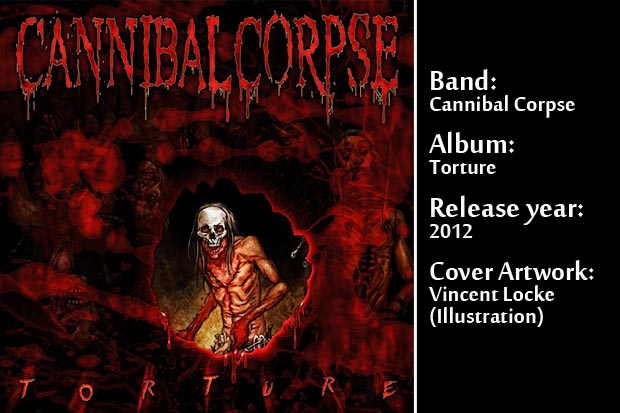 08. James May – Black Tusk (drummer, vocalist):
“I would have to say Ozzy Osbourne’s The Ultimate Sin would be my all-time favorite. Aside from really digging the album, the cover is such as classic. A serpent and a hot possessed demon girl that looks like they are standing in hell. Not much more needed to explain why this cover kicks ass!… oh, did I mention it’s called The Ultimate Sin? Metal as hell!” 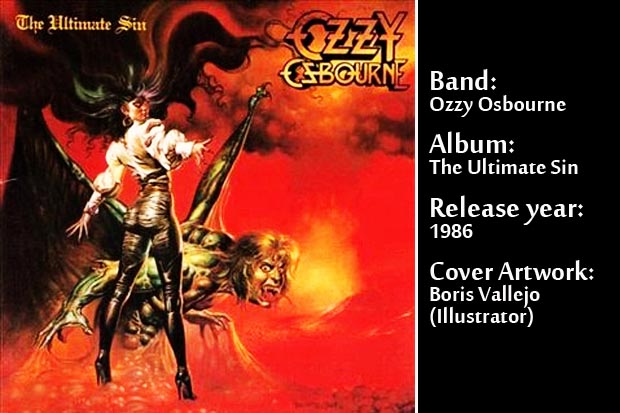 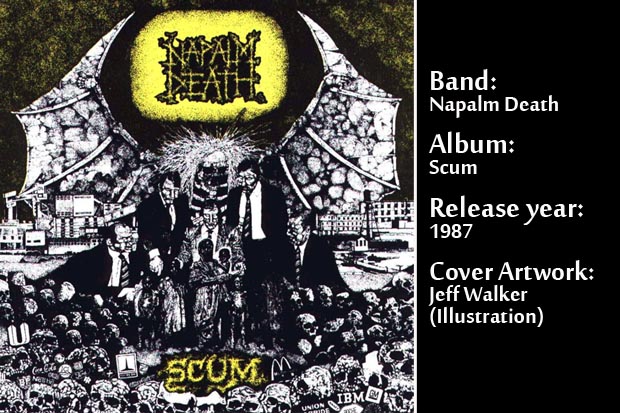 Again, don’t run away crying. There’s more to come! Spread this article around, tell all of your friends, sound off in the comments below and definitely be SURE to come back next week when we post the fourth, and this time final, part of our “Metal Artists’ All-Time Favorite Album Covers” mini-series. ROCK! 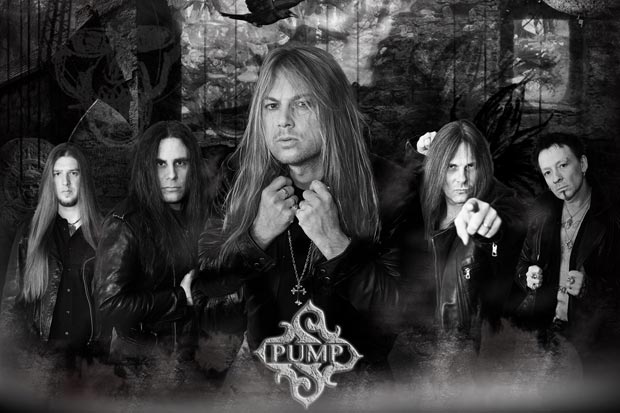 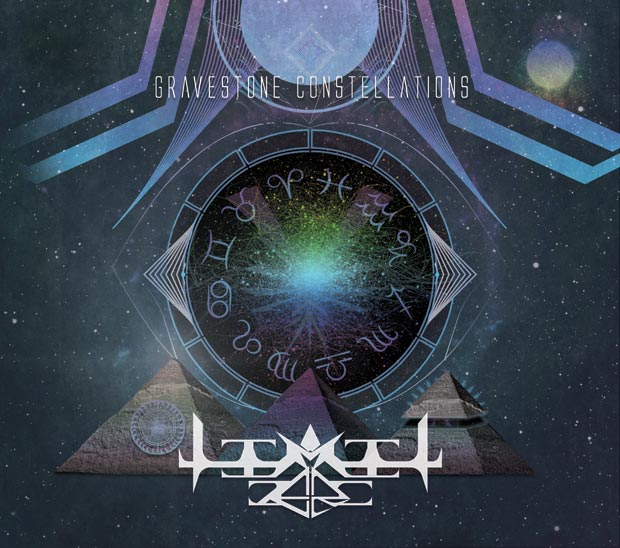