Everyone, metal musicians included (unless of course you are Devin Townsend), has a favorite album cover. At some point in their lives, these musicians have fallen in love with a particular cover art that has long-since resonated with them and in some cases, even influenced their very own musical careers. Bearing this in mind, we asked a handful of metal’s leading musicians one simple question: “What’s your all-time favorite Rock/Metal album artwork and why?” Well, most of the responses were very detailed and enthusiastic, yet for some this proved to be a difficult subject. Let’s see who they were and what they said….

01. Mika Martinussen – Beaten To Death (bassist):
“Slayer Reign in Blood, hands down! I never get tired of it. The beautiful red sea of blood and people; the mighty goat-like creature who seems to tell his servants (who seem to be sort of aroused by the situation… or probably not); the snake tongues, the victims of torture… It’s not that I appreciate or ever care about the obvious blasphemy going on here, it’s all about the colors, depth, texture, the way the artist (as far as I can tell) combines photographs with painting. And the dark, dark feel of the whole thing… It’s just so rich in detail and scariness and – together with the ‘look, we’re drunk!’ picture of the band on the back sleeve – matches the sound of the album perfectly.” 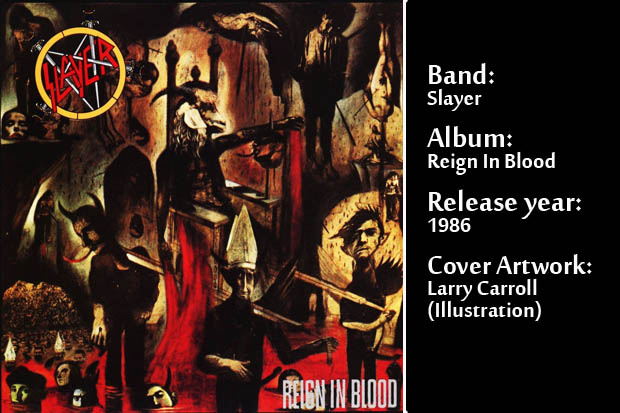 02. Charlie Benante – Anthrax (drummer):
“My favorite album cover would probably still be Queen’s News Of The World. Love it, there’s something about that album cover that always makes me… just love it!” 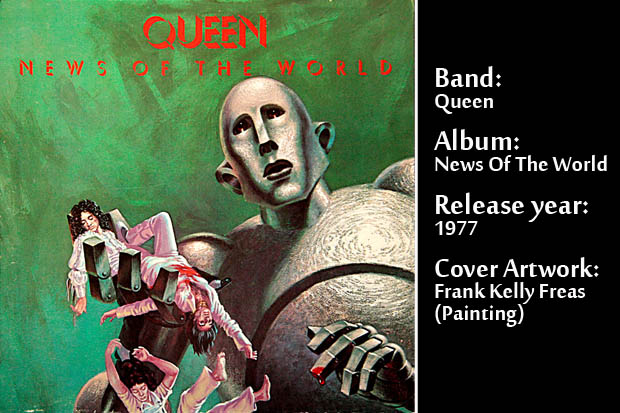 03. Michael – Sunflower Dead (vocalist):
“My favorite album cover of all time is Korn’s debut album with the little girl next to the swing-set looking up at someone. All you can see is the shadow of that person looming over her and there is something in his hand and you can’t tell what it is. This cover always gave me that sick, totally off, something wrong is about to happen feeling. I love THAT feeling!” 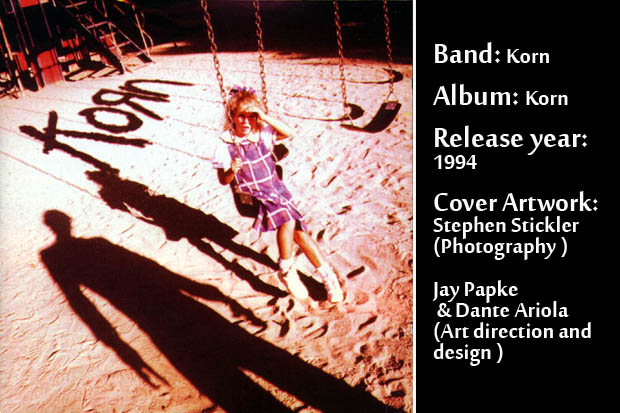 04. Jeff Hughell – Six Feet Under (bassist):
“Iron Maiden’s Piece of Mind. I saw it when I was about 8 years old and it freaked me out! Nowadays it’s still my favorite. The colors and the rubber room with Eddie chained up is sick! It’s also my favorite maiden album. So good!” 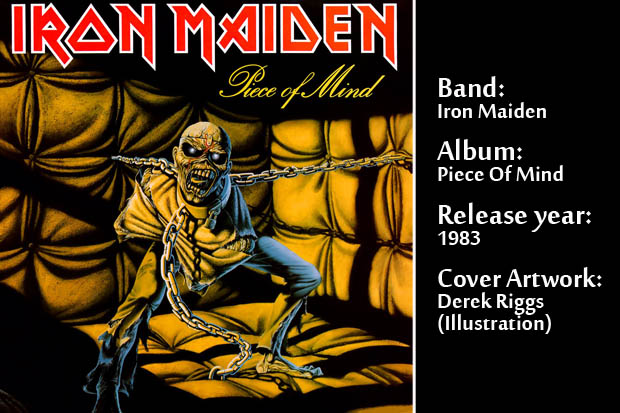 05. Slo – Smohalla (vocalist, guitarist, drummer, keyboardist):
“Even if it’s almost impossible to choose among thousand of super artworks, I’m thinking about Lvmen’s second release Raison d’ Etre as one of my favorite ones. This is a photography, kind of simple in its composition, with a lot of empty spaces. You can see a silhouette of long hair girl, very contrasted so almost all black and brown, standing up alone, with like almost invisible sun at her feet. The photography got this specific grain you can find when you shoot your cathode television with a camera.

I think it’s coming from a Czech movie, but not sure about it as there’s no info about visuals on the CD layout. I choose this visual cause it reflects the great music you can hear on that record. This is one of my greatest influence and one of my favorite albums ever. Really desperate and particular screamo, progressive, tormented with twisted crazy riffs and vocal parts, a lot of smart ideas, strong and intense emotions… I think the aura on this album is blacker and more desperate than 90% of all you have and will hear in the black metal scene. And the cover layout definitely succeeds to transcribe this atmosphere.” 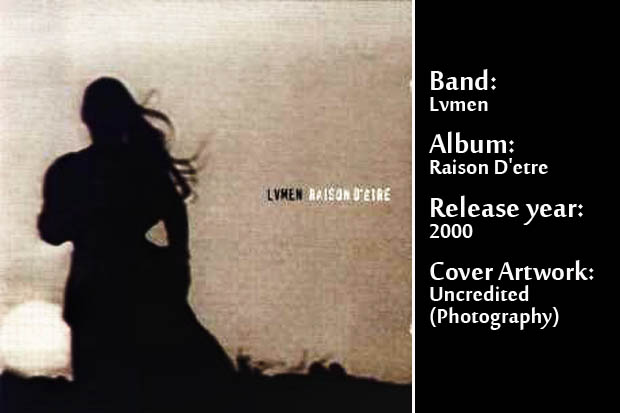 06. Eric Marshall – Dirtfedd (guitarist):
“Pantera’s Far Beyond Driven with the drills coming down to the skull. I love that one. It’s a good representation of the music that is on that album. Like ‘it is just in your skull.’ It hits you right there. The content it just smashes up…” 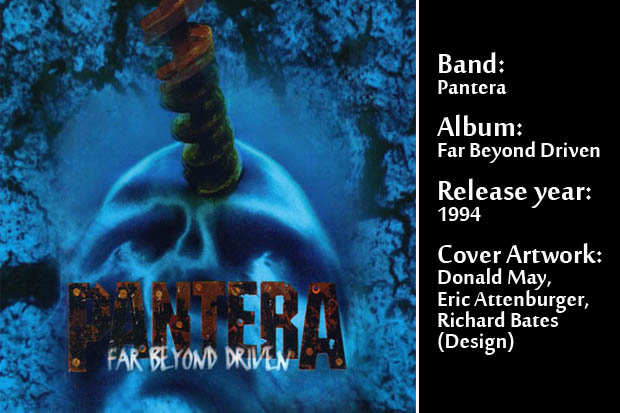 07. Steffen Kummerer – Obscura (vocalist, guitarist):
“Dissection’s Storm of the Light’s Bane. Kristian “Necrolord” Wåhlin is one of the few artists in Metal that still delivers handcrafted and hand-painted artworks in oil. Nowadays, where everyone can use Photoshop decently and prepare his own art, this is a slap in the face. Real old-school and elementary in style. Most of his works are outstanding and his very own style is one of a kind. If you are into real work, lend your eye to Necrolord’s fantastic galleries.” 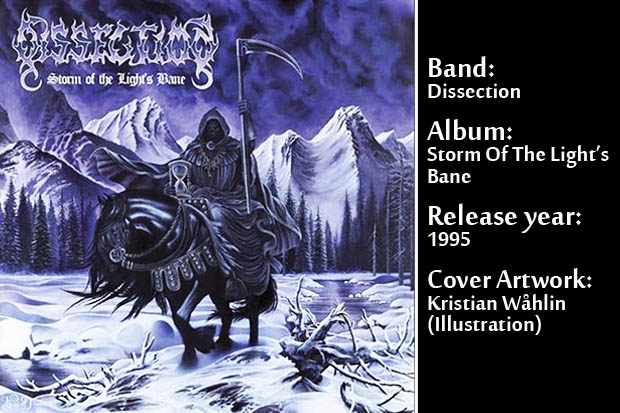 08. Dan Gargiulo – Revocation (guitarist, vocalist):
“Favorite death metal album cover: Effigy of the Forgotten by Suffocation. I love pretty much everything Dan Seagrave has done, but for me this one stands out. It’s got everything I want to see. A robot. Gore. Hideous monstrosities hatching from eggs. Every piece of album artwork ever made should feature these things. In the true spirit of punishing, stampeding, bone-crushing death metal, the depicted scenario is completely hostile and terrifying. The colors are drab and bleak, but still complement each other. Plus, the record is killer. The imagery that the tunes conjure up is pretty much exactly what’s on the album cover. Buy this record, and play it at a painful volume while staring at the artwork.” 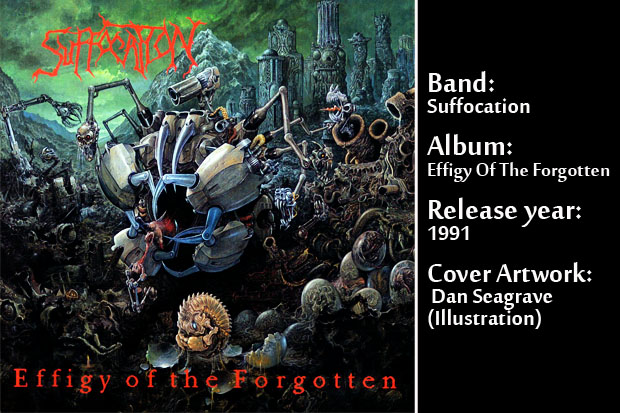 09. Felix – Looking For An Answer (guitarist):
“Cattle Decapitation’s Humanure is the best cover album ever in my opinion. Why? First of all because it is a tribute to the “Atom heart mother” from Pink Floyd, one of the best bands on Earth and second, because it is an ironic vision into the animal liberation and Vegan stuff and for sure we are into it.” 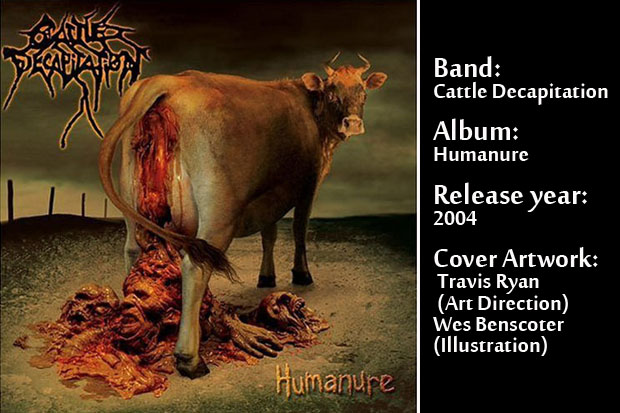 10. Devin Townsend – The Devin Townsend Project (vocalist, guitarist):
“I…(long pause)…I don’t know! I’ve never thought of that. I have no idea. I think I’m not so visually stimulated that I put things into that category, I guess. I’m so much more about hearing than seeing that I know what I like, but I’m very rarely fascinated by a cover enough to think of it as being a favorite. If a record that I hear is something that is emotionally connecting to me, I love the cover just because of that, but is never separated from that… you know?” 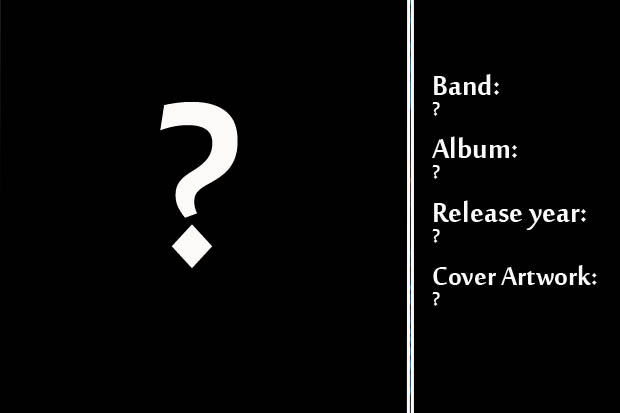 The list goes on… so see you next week with the second part of “Metal Artists’ All-Time Favorite Album Covers”. 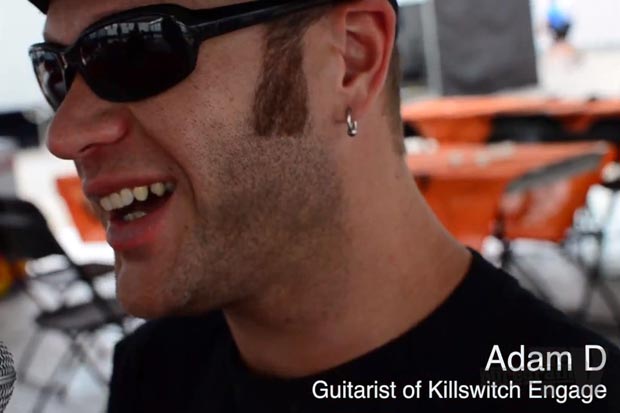 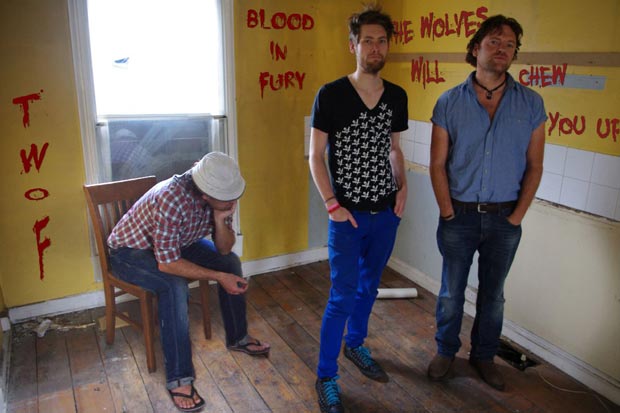 Waves Of Fury – “These Things I Leave You” [Free Download]