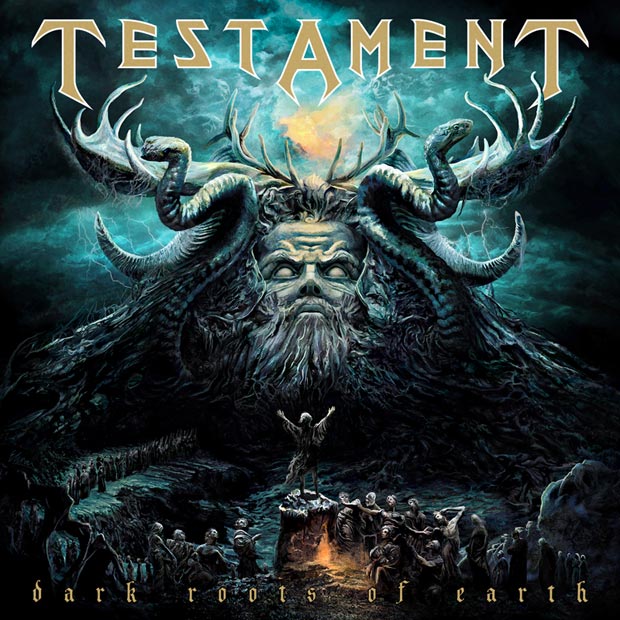 Since the band’s 2008 release, The Formation of Damnation, Testament has seen a huge surge in popularity, with some reviewers and fans now proclaiming the band to be on par with the “Big 4” of thrash metal. It seems everywhere I’ve looked for the past month or so, Testament has been gracing the cover of every major metal outlet, or at least featured prominently within its pages. In short, The Formation of Damnation was arguably the best album of their career and as a result, expectations for Dark Roots of Earth were set SO high that it was unlikely they would be met.

Remember the first time you heard The Formation of Damnation and the opening “Whoa, whoa, whoa” of “More Than Meets the Eye” came on and shredded to bits every previous song that the band has ever done? Then do you remember how “The Evil Has Landed” then shredded that song too? Well, Dark Roots of Earth is kind the same… It too shreds everything Testament has previously done; which is quite a feat considering that The Formation of Damnation was rated so highly by critics and fans alike, without a single negative review (that I saw).

With its rallying cry of “I say rise up, you say WAR!”, opening track “Rise Up” makes it clear that Testament know they have to prove Formation wasn’t a fluke. To say that the song is a stunning opening is understating things considerably. In fact, the song is fantastic and a perfect opening to an album riddled with headbanging bliss.

The next track, “Native Blood”, is arguably the best song that Testament has done in their storied career. It’s a heavy and thrashy ode to singer Chuck Billy’s Native roots and is the best song on the disc. The rest of tracks follow suit and are equally impressive. They each demonstrate that Testament definitely belong in the same breath as Metallica and Megadeth. How these guys have managed to release the best album of their career this late in the game (seeing as they’re all in their late 40s and 50s), is completely beyond me.

Check out the song: “Native Blood”