Castle has been called a thrash-inspired doom band by some and plain old doom by others. To these ears the band mix everything good about old-fashioned metal with a bit of doom thrown in for good measure. Their latest album Blacklands, has been out in Europe for a short time and now they will be releasing the album on September 11th in North America. The band will probably blow up into a huge draw soon enough so check them out as soon as you can.

I really enjoyed Blacklands and it appears to have received positive reviews. I know you guys aren’t extremely well-known so could you go over the band’s history a bit?
Mat: Thank you. Castle grew out of a solo project that I had since around 2006. I wrote a lot of the first record, In Witch Order on my own before I met Liz. It was Liz who pushed me into putting the record together and getting Al to play drums. From there it was us recording the record and having the good fortune to hook with Van Records and more recently Prosthetic Records, who just became our American label.

To my understanding you are from Ontario, correct? How did you manage to get together with a US-based band?
Mat: Originally yes, but I’ve been in San Francisco for the last eight years. Liz is from the mountains in Northern California, but had been living in San Francisco for quite a while when I met her in 2009. Al our drummer still lives outside Toronto, Canada.

I’ve heard you tagged as a doom band so much I was suprised when I heard Blacklands as it is so much more than that. I hear a lot of Dio era Sabbath, Motorhead and even Judas Priest. How would you classify yourselves?
Mat: I think we fall most easily into Heavy Metal. All the influences you mentioned are pretty much what I was listening to not only from way back in my early years, but also pretty heavily before I began writing the Blacklands album. There are elements of doom and thrash and some rock and roll, or more like blackened roll, but primarily with our tempos and riffs and emphasis on songwriting I would liken it mostly to Heavy Metal.

Check out the song: “Blacklands”

My promo didn’t include lyrics, but what I heard sounded both fantasy and occult based. Any particular novelists or movies that have inspired you lyrically at all?
Mat: Yes that’s not too far off. Some of the lyrics are really metaphorical for something a little deeper, but to keep the mood of the song we delve into that imagery. The book “Westernlands” by William Burroughs was the impetus for the song “Blacklands”. A book called “Black Elk Speaks” was the inspiration behind the song “Dying Breed”. Liz and I read constantly so there’s always ideas finding their way into the lyrics. Movies that helped inspire the music or ideas one way or the other for this record include ‘Thief’ by Michael Mann, ‘Badlands’ by Terrence Malick, ‘Suspiria’, ‘L.A. confidential’ and probably a bunch of others.

Also, in the US in particular there seems to be concerns over “satanic” elements in songs. Any worry over backlash on that?
Mat:Not at all. I don’t think we reflect an image of Satanism. There are occult elements for sure, but that has to do more with looking behind the meanings of things, having a wider frame of reference and opening up your perceptions. It’s a wider view of life, one of freedom from the confines of organized religion or any religious dogma at all for that matter; including Satanism.

How did you get into playing heavier music? Who were your favorite bands growing up?
Mat: I was in a metal band when I was 16. That was around 1988 in Canada. We played thrash music heavily inspired by German thrash like Sodom, Kreator, Vendetta and also bands like Voivod and American bands like Testament, Megadeth, etc… That’s all I listened to for a long time. When that band ended in 94 or so I kind of got out of music for a while until a friend of mine played me some Black Metal a few years later, maybe ’96. It was Darkthrone’s Transylvanian Hunger. It was like a light switch going on when I heard it. Like the first time I heard Voivod 10 years earlier – how did they get that sound? I wanted to know, it was inspiring. When I started to write and record the Castle demos in I kind of mutated all those influences into the Castle sound.

How was the video shoot for the song “Blacklands”? Why was the title track picked?
Mat: The video shoot went easily enough, it’s always great working with Jaan who also did the “Descent Of Man” video… although, I didn’t know it at the time, but I had an infected tooth and was really really out of it that day! We picked that song collectively because it summed up a lot of what the album was all about, riffs, melody, mood and it rocks. 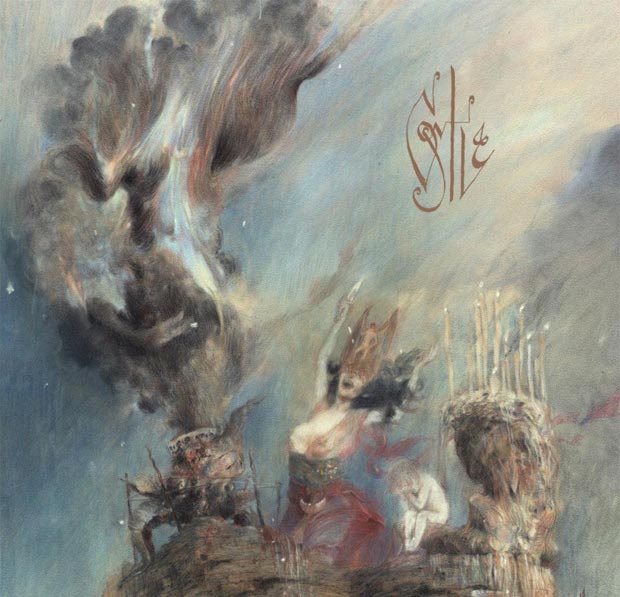 On downloading: a lot of people justify it as a method of “try before you buy”, yet most bands offer streams in advance and services such as Spotify, Bandcamp, Rdio, Mog and others offer unlimited streaming for little to nothing. When I grew up I had to pay 15 to 20 bucks for a CD with no advance preview. Why do you feel music is so devalued nowadays?
Mat: I just read a good article with Steve Albini who had a great point to make. He was basically saying that streaming music is great for bands and great for fans. It reaches a ton of people that might never have heard of the band. And it helps mostly if the band gets out and tours. That’s how they’ll reap the benefits of online music… by getting the performance fee, selling t-shirts and CDs at shows. I agree and I also agree that it sucks for labels, especially the majors but then again, the bands have the potential to take advantage and the smart labels are already figuring out how to stay relevant. I don’t think digital streaming or downloading is in any way a legitimate replication of a great record or a recording, that’s where the more serious fan needs to buy a record or a CD to really experience the music and art. So I don’t know if the music has been devalued, I just think that value has shifted.

Any lesser known bands you want to recommend?
Mat: I’m a little out of the loop when it comes to new bands. I ‘m always checking things out, but nothing so out there on the fringe that other people wouldn’t know it… I’m the guy other people have to tell to check things out!

What albums have you been listening to lately?
Mat: Liz and I have been rocking the new Witch Mountain record in the car. It’s great!

Anything Else you wanted to say?
Mat: Thanks for the interview… it was a pleasure. Keep an eye out for Castle, we’ll be touring the U.S. in October and November with some rad bands and also will be hitting Europe in the Spring of 2013 with a new EP.

Check out the song “Corpse Candles”