…And Justice For Art: Anthrax’s “Among The Living” – An Intriguing Painting for a Thrash Metal Masterpiece

What else could be said that hasn’t been said before about Anthrax’s seminal 1987 masterpiece Among the Living? The album that contained such classic Metal hymns as “Caught in a Mosh”, “I am The Law” and “Indians”. The album that was superbly co-produced by the band and (against all odds) Eddie Kramer, a man previously associated with artists so disparate as Kiss and Carly Simon. The album that so deeply defined the New York Thrash Metal quintet that to this day, drummer Charlie Benante still refers to it as their “signature album, the one record that really pushed us over the edge.” What else could be said about this sacred piece of Metal history? Well, there’s that intriguing cover artwork that almost everyone in the Metal world recognizes, but doesn’t know much about… 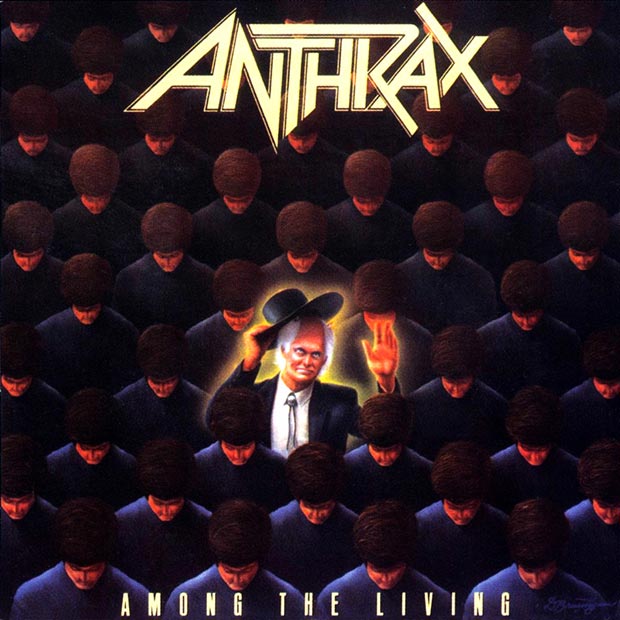 Many people believe that the now iconic image of the eerie old man wearing black and ominously waiving his hat while emerging from a crowd composed of identical human figures is an obvious reference to Randall Flag, the mysterious antagonist from Stephen King’s post-apocalyptic horror/fantasy 1978 novel “The Stand”. Others state that it is a representation of Rev. Henry Kane, the main evil character present in both sequels of the “Poltergeist” movie trilogy.

However, Benante – a man deeply involved with almost every Anthrax album cover – boldly reveals a very different, yet fascinating story. He was the one who came up with the concept in the first place. The drummer affirms that despite the fact that the title track’s lyrics were “based on the Stephen King book, I wasn’t thinking about it when I had the idea. I was always into horror and the title ‘Among The Living’ was basically about Good and Evil. It was just about how much evil there is amongst us. I wanted to show just the same type of person on the cover. The same type of people and then, the one person that was sticking out kind of giving you a wave, like a hi! And that’s where the concept started.” 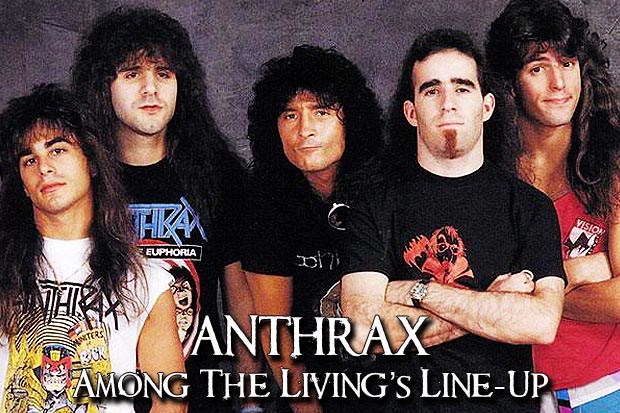 On the other hand, even if the “Poltergeist” movie sequels (especially part 2, which came out a year prior to Among The Living) weren’t a direct link to the old man on the cover, there was indeed some sort of a reference: “‘Poltergeist’ had a very strong visual image to me and I liked the way it looked. I didn’t want do have some evil demon on the cover, I wanted to have someone who could be a preacher or anything.”

Delving further, and due in large to the band’s antics and their peculiar sense of humor, it would be perfectly accurate to speculate that all these dark overtones could hide some kind of inside joke. Charlie debunks that theory saying: “No, I don’t think there was anything funny about it. I think that when you see it you know you’re going to be getting something intense. It was a cover that made you want to think like: Who is this person? Is he the devil? Is he evil? Because anyone of us could have evil thoughts. There are a lot of bad people out there, you just don’t see it in front of you.” 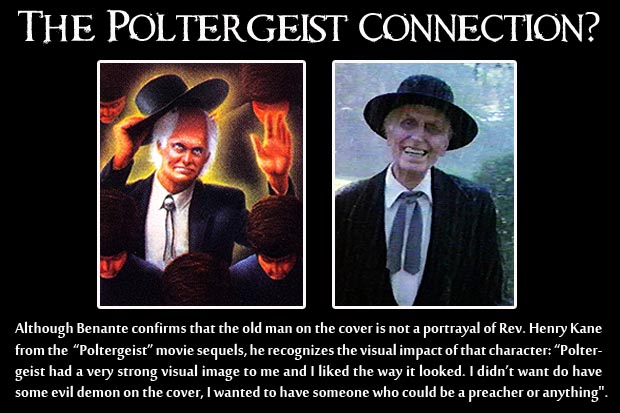 As usually happens with many remarkable works of art, sometimes the original idea that inspired the creator(s) can adopt a radically different meaning once audiences are exposed to the final piece. This has been the case with Among the Living‘s artwork. After all, not every fan jumped on the Stephen King/Poltergeist bandwagon. Among the most jaw-dropping online theories, there’s one that takes the artwork’s meaning to a whole new level: the old man and the glowing aura around him could represent the band excelling at that precise moment over many of their peers, obviously symbolized by the identical less illuminated human figures. Even Anthrax singer Joey Belladonna has stated that certainly, “It has a mystic to it. It’s kind of like a mystery. You have to look in there and figure it out. And then, there might be no meaning at all.” Ultimately, Benante acknowledges: “Some fans have said some things about the cover. But for the most part I think they really like the way it came out.”

Without a doubt, good timing was a key factor for the success of Anthrax’s third album. The mid 80s was the boiling point for Thrash as a musical genre and as a mass phenomenon. “When our record came out there were other records that came out that were very significant to the bands that made them”, Charlie remembers. “We had ‘Among the Living’, Metallica had ‘Master of Puppets’, Megadeth ‘Peace Sells…’ and Slayer had ‘Reign of Blood’. So, all these Big Four bands in 1986-87 released what would be their signature albums.” It was precisely Metallica’s Master of Puppets album that shared with Anthrax’s recording not just important musical connections, but also the genius artist behind both cover artworks: prominent American illustrator and painter Don Brautigam. 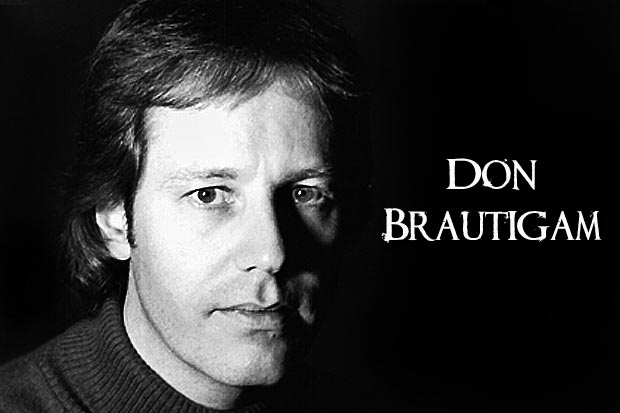 By the time the New Jersey-born artist began to work with the band, he was already a force to reckon with in the world of commercial illustration and advertising. Having designed ads for brands like BASF, Pepsi and Dell, Brautigam was also a seasoned creator of memorable covers for many bestseller books including – coincidentally – Stephen King’s “The Stand”, Dean Koontz’s “Dragon Tears” and re-editions for HG Wells and Agatha Christie tomes. Also, since the early 70s, artists like Jazz mavericks Return To Forever, Rock icon Chuck Berry and the legendary James Brown all used Brautigam’s pictorial talents for their album covers. “We (Anthrax and Metallica) were both working on with the same company. Don was available and he came into the mix. We had a good meeting with him, we talked and he was awesome”, says Benante. 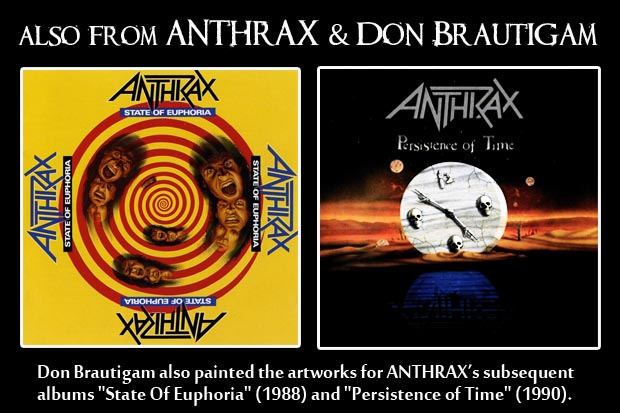 The designer’s painting technique was centered around work with acrylics on boards and a mixture of airbrush and brush. He was also known for being the pioneer of using black paint on book illustrations which revolutionized the industry. The pictorial aspects of Among the Living reveals a very subtle use of mixed styles. The composition itself has an almost symmetrical approach. The patterns of identical young men give a very particular sense of vertical perspective which is enhanced by the dark tonalities of the clothing. This infuses psychological depth and an ambivalent meaning to the old man at the center of the piece, whose yellow glowing suggests a supernatural aura.

“Everyone loved it. It was great! Everything came together in such a great way!”, Charlie enthusiastically recalls when talking about the band’s reaction to the final result. In fact, they liked it so much that they used Brautigam’s services again on their next two albums State Of Euphoria (1988) and Persistence of Time (1990). So big was the impact of his work on both Among The Living and Metalllica’s Master Of Puppets that he quickly became one of the most in-demand album designers of the mid 80s and early 90s, spawning covers for acts such as Metal Church, Motley Crue, AC/DC and many more. At the time of his death in 2008, Don Brautigam was considered one of the American visual artists that arguably painted the most certified Gold and Platinum album covers in music history. 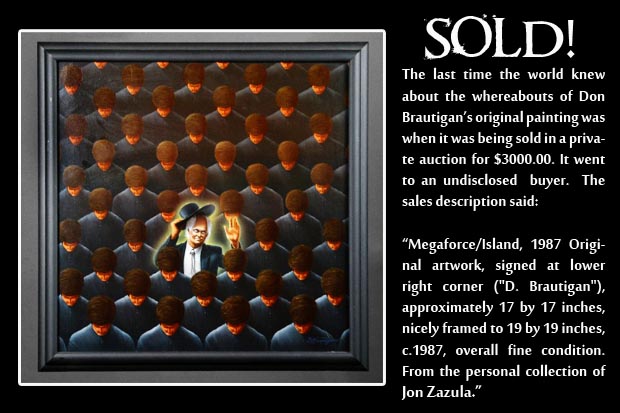 To this day, Anthrax still uses the now-classic Among The Living artwork on all kinds of merchandise including apparel and even guitar picks. Undoubtedly, it has become a landmark that still provokes curiosity with newcomers and spices up the imagination of long time fans. But… what happened with the original?

That’s part of the description appearing on a private online auction that claims that the painting was sold for US $3000.00 to an undisclosed buyer. Definitely, a great deal for such a unique piece of Metal history. “It’s probably in someone’s office or someone’s living room” says Charlie Benante with a very noticeably sad tone in his voice. “I wish I owned it…”

Coming Next Week: Archaios’ “The Distant” – A Third World’s Cry of Emptiness
Previously on AJFA: Cormorant’s “Dwellings” – The Triumph of the Independent Spirit