“Be ambitious, original, passionate and never let all the people telling you ‘No’ dissuade you from your goals. You are your own best advocate and now is the best time in the history of recorded sound to be an independent musician. Embrace it.” That’s the advice Cormorant’s vocalist and bassist Arthur von Nagel gives to those bands trying to find an audience in today’s saturated underground Metal scene. This Californian quartet knows better than most about the payoffs of adopting the independent artist model. While they have enormously contributed to American Black Metal’s true identity, Cormorant has also set many landmarks within the do-it-yourself territories. After all, building a name, a brand and a reputation without any external help from record labels is – to say the least – nothing short of amazing. 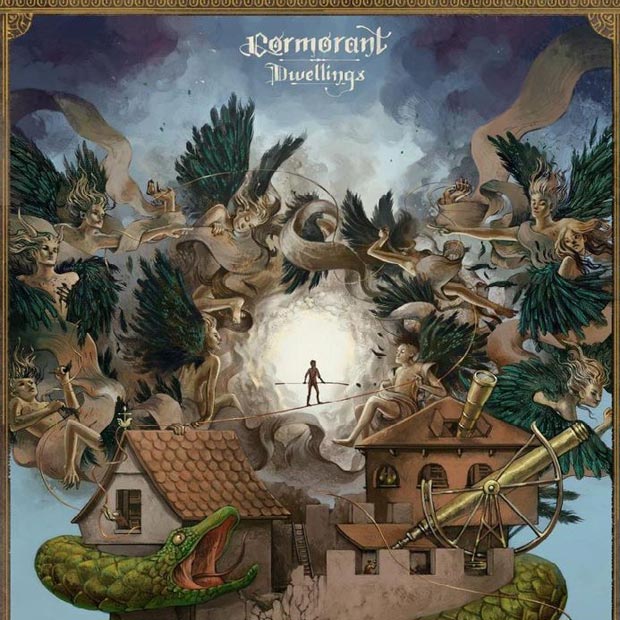 Take a glimpse at the covers of their self-released albums alone, and that’s all you’ll need to confirm this Metal unit takes everything related to the visual representation of their music very seriously. In 2009, the artwork of their album Metazoa seemed to be an achievement impossible to match. Then, 2011 brought the band’s musically-riveting third recording Dwelings. All previous assumptions were simply crushed by the vast complexity and monumental scope of the illustration dominating the cover of the CD’s three-panel digipack edition. “At first, we wanted to create a cover that was simple and immediate to accompany the stripped-down evolution in our music”, von Nagel remembers. “We considered the influence of darker abstract and expressionist art such as Paul Klee’s and Oskar Kokoschka’s at his most wild. But, this style was not to be.” 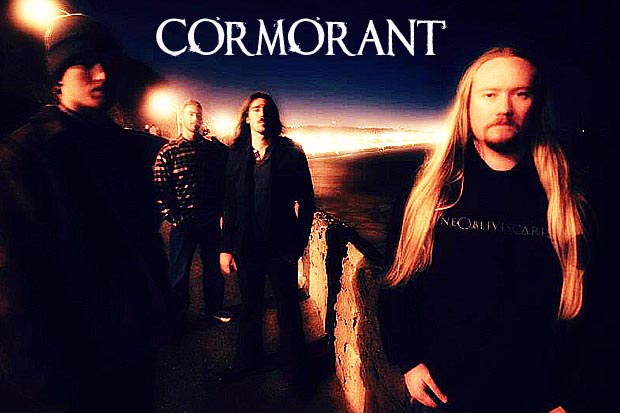 While Metazoa was primarily totemic and focused on Man’s link to nature and the animal world, Dwellings‘ central motives were more centered around Man’s desire to overcome and dominate nature through architecture, art, exploration, war, religion and language. “The album’s themes demanded a more literal interpretation and it was important for the artwork to reflect this change in tone”.

With such ideas in mind, the band ventured on a three month Internet search to find an artist capable of bringing their vision to life. This culminated with the discovery of the U.K.’s illustrator Alice Duke. “We found her through Deviant Art. Her portfolio had the attention to detail, the grasp of texture and the mythological elements we were seeking. Even though she didn’t listen to Metal, I felt we shared a kindred artistic vision, a balance between the ancient and modern.” And that’s how began the creation of the vertical-oriented monolithic image of an ancient tower embraced by a giant vine-serpent surrounded by man-created chaos while a lone human figure tries to reach the divine. 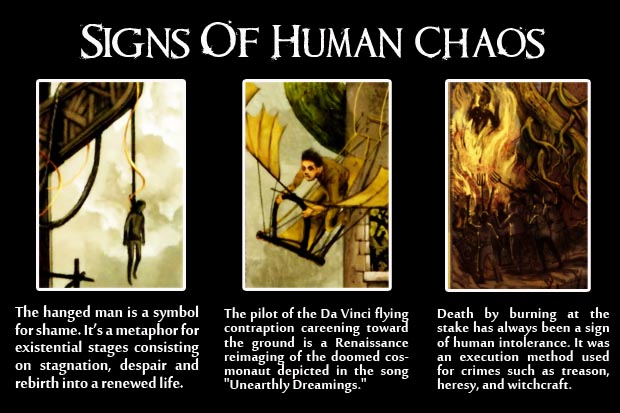 Although the members of Cormorant came to Alice with a specific concept in mind, the bands affirms that “direction of the final piece was very collaborative. She suggested some fantastic ideas of her own, including the hands grasping the prison bars, the astronomy lab and some significant perspective and placement changes from our original vision.” The young artist would work on an illustration that, despite being mainly executed via digital techniques, reflects notable influences from Flemish Renaissance and Pre-Baroque painting. Its resemblance with the works of Hieronymus Bosch and Pieter Bruegel is very notable, especially on the rich level of imagery. However, the finishes provided by the digital brush give the painting both a classical and contemporary feel that helps to create an ageless atmosphere. 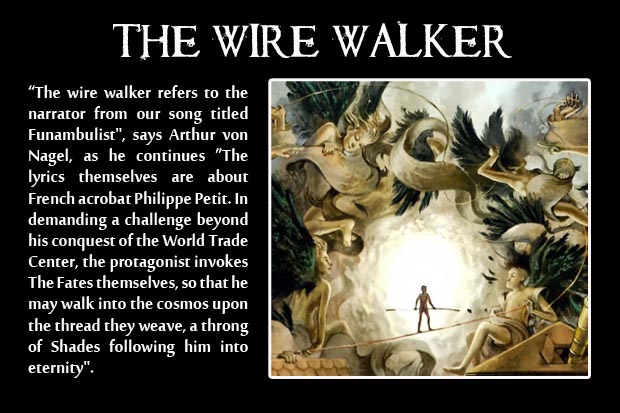 Without going too deep, Von Nagel reveals that the painting “represents Man striving for immortality.” He also points out the clear influence of the album’s lyrics. In fact, many of Dwelings‘ songs became a creative source for some of the many symbolic motives overflowing the scene. “The tower was inspired by the instrumental track ‘Confusion of Tongues’ which refers to the Biblical account of the dispersion of languages in Babylon. The pilot of the Da Vinci flying contraption is a Renaissance re-imaging of the doomed cosmonaut depicted in the song ‘Unearthly Dreamings.’ The wire walker refers to the narrator from ‘Funambulist’ which is about French acrobat Philippe Petit.” Probably, the most genius element in the whole composition is precisely related with the walker motif: “If you trace the golden wire below the tightrope walker’s feet, you’ll notice it winds its way through the entire painting, originating near the bottom with the three goddesses at their loom.” 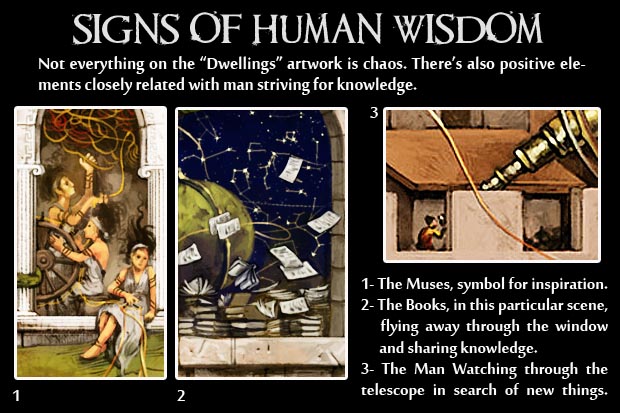 So, after six months of work on the cover, the packaging design and even the booklet’s calligraphy… what was the band’s reaction when they saw Alice Duke’s final result? “We ended up paying her more than she initially asked for because we were so impressed with her work. I’m sure she wanted to (justifiably) murder us all by the completion of the project, but I feel it worked out. Our apologies to Alice for probably being difficult clients and also our gratitude for delivering such an amazing final product!”

Nowadays, it doesn’t matter how long it took or how grueling the process was. The reality is that the music on Dwellings and its companion artwork, are now out there for the ages to come. They have already found recognition among fans and critics alike and the feat is nothing short of epic. Plus, this was all in part possible thanks to Cormorant’s indie antics. “Because we are independent, our financial resources are actually greater than many signed bands”, Arthur enthuses. “We’ve been a self-sustaining business since the Metazoa release and we’re able to pay for much of the recording, artwork and printing of Dwellings from sales of the previous album. We’re also extremely grateful for the many hundreds of fans who pre-ordered the album. Those fans are thanked in the album booklet.” Just like all great things should be! 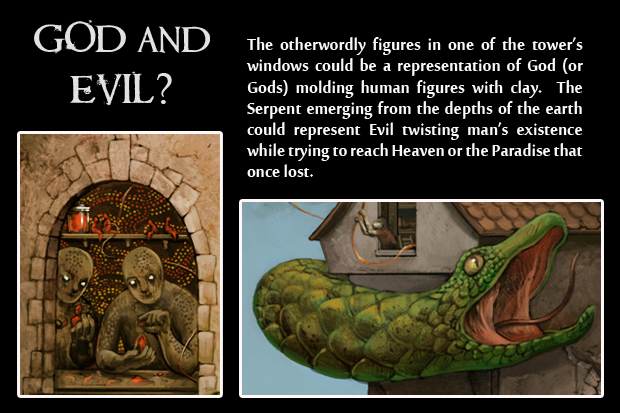 Coming Next Week: Anthrax’s “Among The Living” – An Intriguing Painting for a Thrash Metal Masterpiece
Previously on AJFA: SIGH’s “In Somniphobia” – The Mysteries Behind a Nightmarish Market Scene