Despite the commercial and gigantic critical success of the highly influential albums Human (1991) and Individual Thought Patterns (1993), many consider DEATH’s sixth recording, Symbolic (1995), to be one of the band’s greatest achievements. On the songwriting side, main man Chuck Schuldiner kept refining the Progressive-oriented Death Metal he had begun to develop on the previous two albums. By now, he was adding more melodic textures to each song’s razor-sharp intricate riffing. Also, the newly-established professional relationship between Schuldiner and producer Jim Morris (owner of the famous Morrisound Studios) catapulted DEATH’s sound to a crystal-clear stratosphere far away from most of their peers. Not in vain, Symbolic – the first and only DEATH recording under the Roadrunner Records banner – spawned many fan favorites, including the visceral title track, the frantic “1000 Eyes” and the aggressive yet atmospheric “Crystal Mountain” and “Zero Tolerance”. 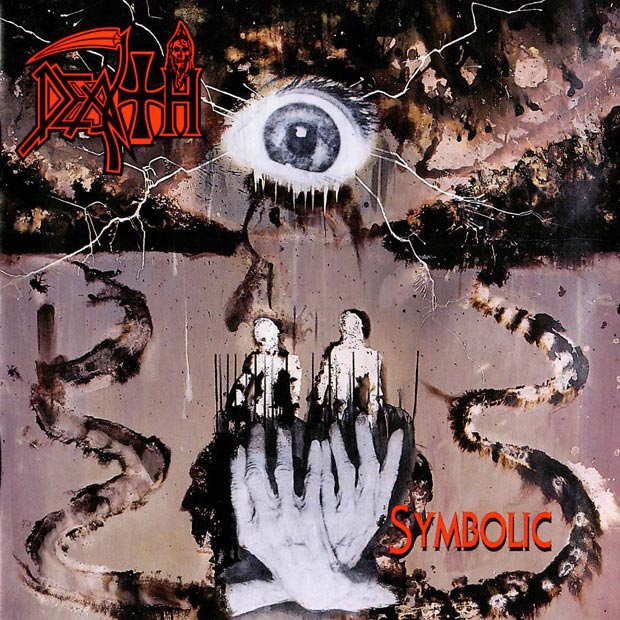 Equally sophisticated and thought-provoking was the disc’s exquisite cover artwork. To most people’s agreement, the piece perfectly captures the album’s overall mood. However, audiences and press’ attention has always been so focused on the music that, to this day, recollections about its undeniable visual and psychological impact are virtually nonexistent.

One could attribute that apparent lack of interest to the fact that it wasn’t the first time that DEATH showcased a true work of art on one of their album covers. In fact, this was the third consecutive time that Schuldiner commissioned Florida-based artist Rene Miville to create a visual representation for one of his band’s recordings. Unfortunately, this could have affected people’s perception of such a monumental work. Especially, among those already accustomed to the band’s high-quality visual standards. 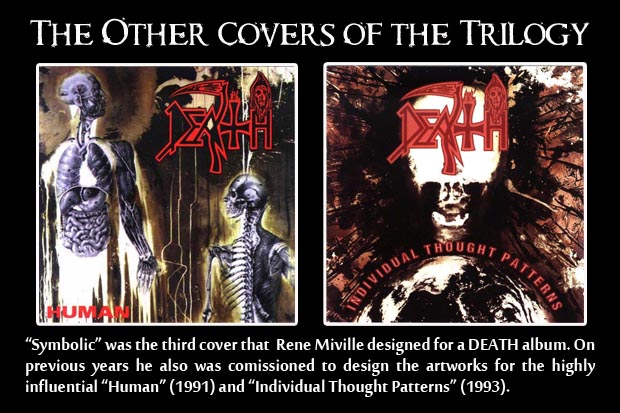 Whatever the case, it is increasingly difficult to uncover first hand information related to the making of this unique visual behemoth (sadly, Schuldiner no longer belongs to the world of the living and Miville has been hard to reach). In addition, most of the other main figures involved with the making of the album don’t possess too much information about the subject.

What in the first place could have attracted Schuldiner to Miville’s work? In which ways -beside their obvious geographical proximity – did a high-caliber Metal musician feel connected with an Avant-garde visual artist and former Vogue Magazine photographer? Maybe he saw in the artist’s creations, a reflection of his own dramatic musical progression: “Chuck was at a point where he felt that Ed Repka’s work (who designed the cover of Scream Bloody Gore and Leprosy) was a tad on the cartoony side. Plus, other Metal bands were using him and Chuck wanted to go off in a new direction – same as he was doing musically”, recounts long time DEATH manager Eric Greif, who’s currently protecting Schuldiner’s legacy through Perseverance Holdings. “Somebody had mentioned this Florida photographer who used pictures and chemicals to create cool art and that was it – he stuck with Rene for three records”. 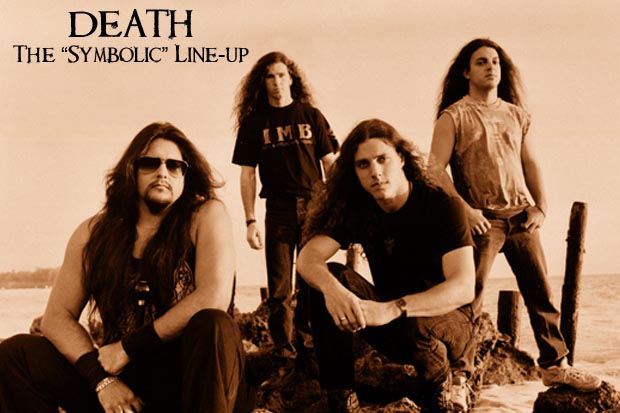 Rene’s work was nothing short of striking. During the late 1980’s and early 1990’s he developed a very unique aesthetic that was the complete opposite to the exciting new possibilities that artists were exploring through digital media. His innovative technique was based on using chemical manipulation within the classic darkroom printing process. The achieved results were similar to a traditional photograph with the major difference being that he usually painted the chemistry upon the photo paper. “The images are from a body of work at a time when I would photograph very exciting social situations that you just can’t stage. I captured a moment in history. Adding the chemicals adds my reality onto that reality. The beauty of it is that nobody can ever say it’s tacky or decorative, because it’s very real. It stands the test of time,” Miville theorized years ago while talking about his art.

In comparison with the ones on Human and Individual…, the artwork for Symbolic has a less immediate approach in favor of a more abstract and contemplative vibe. Its meaning was never fully explained. One of its many possible interpretations could be: A higher divinity, (represented by the eye and the old hands) guiding the separate ways of two human figures (apparently a man and a woman) and providing a connection between them. Colors also take a protagonist role. The strong presence of gray and sepia tonalities not only conveys a sense of drama and existential depth but also, provide a timeless significance to the whole contemporary setting. 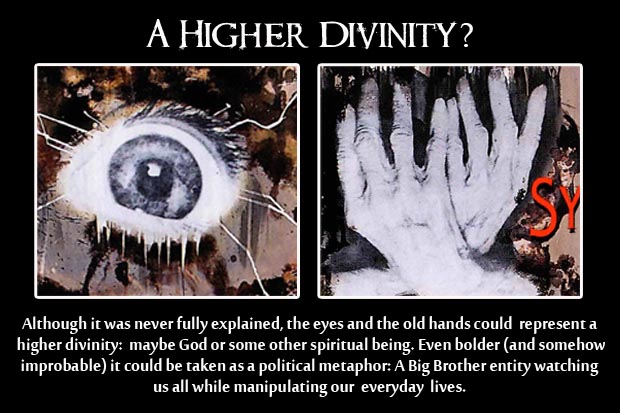 Another meaning could be intrinsically related to the song’s lyrics. As Greif remembers: “I recall some lyrics were sent to the artist and the current cover is what he came up with based on that”. In fact, some song themes on Symbolic are deeply introspective and in more than one occasion, Chuck expressed that some of the album lyrics were dealing with real situations in or around his life at the moment.

Despite what Miville’s initial intentions were when he created the cover, there is one undeniable truth. Besides providing an accurate visual support for the quartet’s music, the three artworks he produced for DEATH eventually would become his more widely recognizable pieces. The commercial and popular appeal of Human, Individual… and especially Symbolic (which also showcases a slightly renovated version of the traditional band’s logo) provided the artist an uncommon appeal beyond the usually hermetic and snobbish world of Modern Art. Probably, without even noticing it, part of his artistic heritage would become intimately associated with the legend and musical legacy of one of the most crucial entities in the history of Metal music. Just as Miville once said: “Art never dies”. 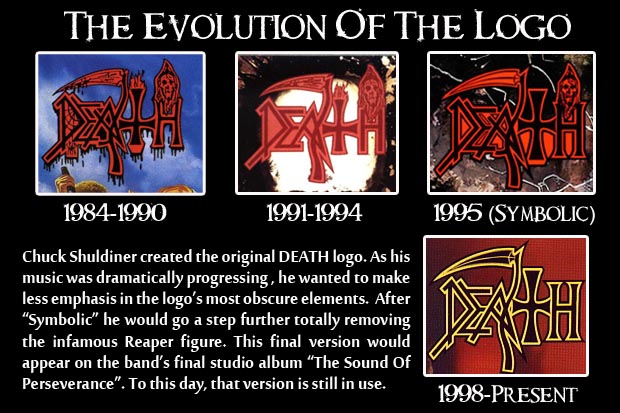 Coming Next Week: The cryptic meanings behind SIGH’s In Somniphobia cover artwork.
Previously on AJFA: …And Justice For Art: “The Beginning of a Visual Journey” 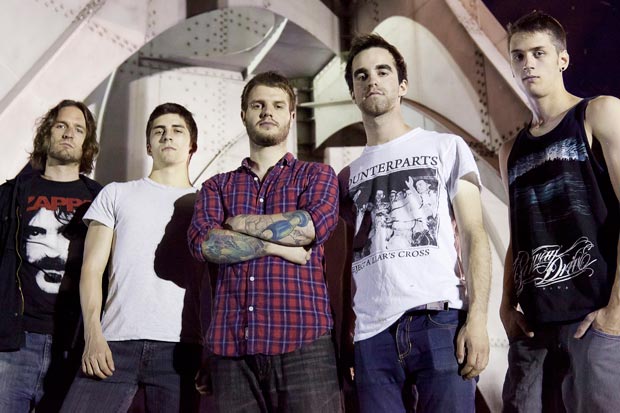 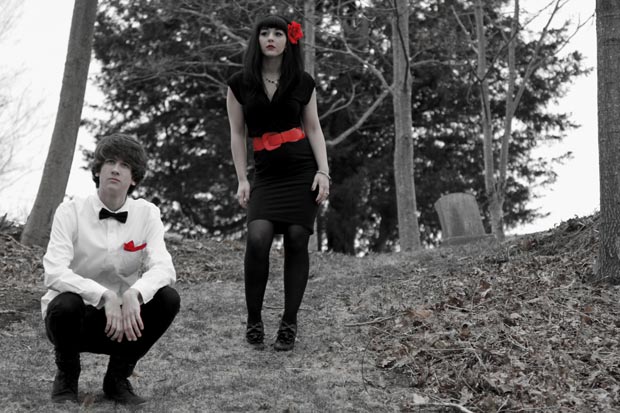