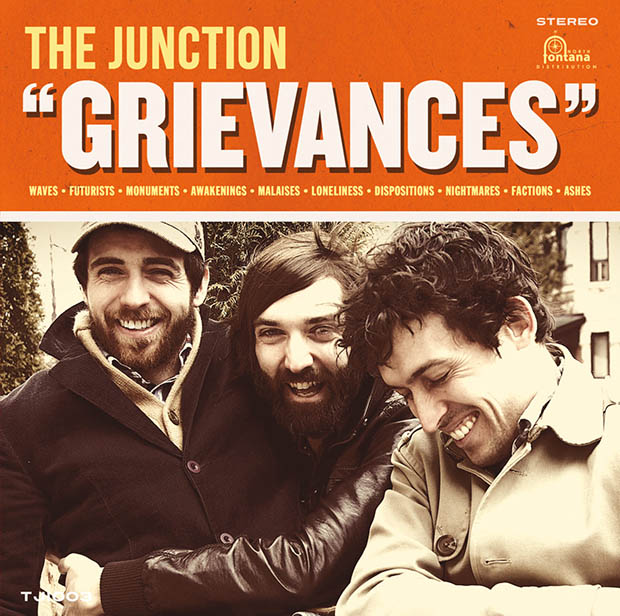 I’ll admit, when I got my hands on the review copy of Grievances, The Junction’s third full-length album, I flipped through the 10 songs in such a frantic manner I wouldn’t have been able to tell what genre of music the band fell into. The album got lost in my mound of digital music and, subsequently, faded from my awareness.

Late one night I was creating a makeshift art piece on my bare white wall in an attempt at being both frugal and pseudo-inventive. It was a collection of black and white photos, all frantically arranged, depicting states of love and turmoil (because they are one and the same, of course). As I was repositioning the photos, with my music playlist emitting a handful of doleful sounds, the most fitting lyric was sung: “just remember that love is the truest emotion you’ll ever have.”

That strikingly honest line is what I, from here on out, will consider as my introduction to The Junction – so please, try your best to forget my initial negligence and give these guys a deserving listen.

On March 6th, the Torontonian triad released an album similar in demeanor to my makeshift wall mural: a collection of telling songs, all frantically arranged, depicting states of love and turmoil. While the album “is not a breakup record,” the cutting lyrics tell a different tale; tainted at times with tearfully wounded words, the songs boast a general theme that cannot be disregarded, as it is blatantly rooted in front man Brent Jackson’s fractured heart.

As a listener, you’ll notice the distressed lyrics have found companionship in various arrangements of sound: at times there are heaps of richly echoed guitars (refer to “Loneliness”), you’ll then find yourself knee-deep in drum-heavy beats that are smoothly tapered by the rich harmonic of a violin (skip to “Futurists”) and somewhere in between there’s a sense of texture and mysticism that can only be provided by pop-rock ambience.

The album is supposed to be a musical examination of universal human pathos in all its forms – brightness and love, but also detachment and heartbreak. Jackson explains the album as a “quest for the real,” and, in my opinion, it’s as real and true as it can get.

Check out the song “Waves”