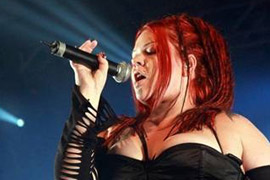 Sarah Jezebel Deva will be releasing a digital-only EP entitled ‘Malediction’, which features special appearances by Dani Filth from Cradle of Filth and Soilwork frontman Björn Strid singing a duet with Sarah on the song “Lies Define Us.” “Working with Sarah Jezebel Deva was a trip. We definitely found common ground humor wise and musically. The song we did together is still ringing in my head. The atmosphere is fantastic and the melody is haunting. Drop the gothic top hats and get ready for the real deal!” commented Björn.

After spending 14 years in Cradle of Filth as a backing singer, Sarah and Dani join forces once again. The Cradle Of Filth front man shares his enthusiasm for the collaboration, “It was great fun duetting with Sarah Jezebel Deva again, being a new thing for me to try and compliment her voice, rather than the other way round (which generally happened on the Cradle Of Filth material), so being involved in this song was definitely a challenge for me (and not a curse) seeing as I only had a few days to leave my stain on it. Fortunately the tune was strong enough to carry away my first fumbling forays. I think the track itself is really powerful and definitely rings as emotive as the subject matter of the lyrics, (which I attempted to embellish rather than change) honestly thinking to myself that the finished song has come out better than midnight in a Playboy graveyard”

‘Malediction’ will be released worldwide on May 28th.