Check out the song: “Mistake Ex-Girlfriend”

Freshman 15 are a pop/punk band that infuses harmony and humor into their music. Recently released album, Here’s To Feeling Good, Freshman 15 will be touring with one of their hereos, Bowling For Soup. PureGrainAudio sat down with vocalist Davey Fortner about the band’s current plans.

This is your sophomore album. What is the difference between Here’s To Feeling Good and Throw Up Your Hands For One Night Stands?
Davey: I would like to give the typical answer of “We have matured,” but we haven’t! It’s the same feel good pop punk from the first CD except we made it faster this time!

The opening track off of this album, you make fun of the fact that this is your sophomore attempt. That’s hilarious. Tell me about that.
Davey: Why thank you! The whole intro is very tongue in cheek. It’s kinda of a big “eff you” to the haters. I never understood how people hate you just for making music. It’s sort of my answer to those idiots! Ha

What is your favorite song off of this album and why?
Davey: My favorite personally is the closing song “My Bad.” It is by far the fastest song we have ever done and the way we close the CD with the chorus compilation is so awesome to me. 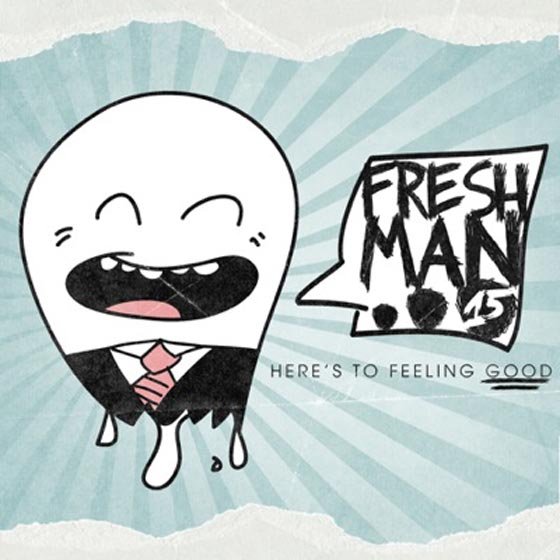 What are your plans to support this album?
Davey: We are heading out with our friends in Patent Pending and Bowling For Soup in April which we couldn’t be more excited for. We have more tour plans for the summer but can’t say too much about them right now! 🙂

What do you think the future holds for pop/punk music?
Davey: In the past few years the pop punk scene has exploded with bands like The Wonder Years, The Story So Far, Man Overboard, etc. I think it’s awesome because once Blink 182 broke up it became very uncool to play pop punk. So hopefully the love for this type of music will keep on rising so I will have an excuse to go out on the road with my friends until I’m 40!

For those people who do not know much about Freshman 15, what is it that they should know about you guys?
Davey: We are dumb energetic idiots with voices of angels.

Check out the song: “Getting Weird”

What is a typical day while on tour for you guys?
Davey: Wake up around noon. Automatically start bitching about wanting McDonalds. After eating that we instantly go to the bathroom. Drive 4-5 hours to the next city while listening to our favorite Britney Spears CD. Get to the venue and load in. Talk to the kids who were nice enough to pay money to see us and then give them the best live show they’ve ever seen! Sleep and repeat.

Are there any final comments?
Davey: My name is Davey Fortner and I like to party.