As he gears up for the April 3 release of his anticipated new artist album REWIND on Ultra Music, New York-based producer and DJ SERGE DEVANT has released his new single “Dice”. The song, a cover of Finley Quaye and William Orbit’s 2004 haunting track, has been revamped for the dance floor with vocals by Hadley who initially appeared with DEVANT on his breakthrough single “Addicted.”

Meanwhile, DEVANT is giving fans an exclusive behind-the-scenes peek into the making of REWIND, the follow-up to his debut album Wanderer. In a video interview that features footage from original recording sessions with vocal luminaries Hadley, Coyle Girelli and Rachel Star, DEVANT speaks about the inspiration behind “Dice” and his other new tracks: “On Your Own,” “You & Me” and “When You Came Along,” as well as covers of seminal dance hits like New Order’s “True Faith” and KLM’s “3AM Eternal.” Watch the ‘Rewind’ video interview here:

Also available now from DEVANT is “On Your Own,” the first single from REWIND featuring rock-driven beats and impassioned lyrics given body and soul by vocalist Coyle Girelli. The single comes complete with a full package of remixes from the likes of David Tort, Stephan Luke and Thomas Sagstad & Mike Hawkins. To visually accompany the track, the full director’s cut video—written, co-produced and co-directed by DEVANT—was shot on location between San Francisco and Miami during Art Basel and features Russian model Anna Vishnevskaya, as well as artwork by Russian painter Andrei Sharov. Watch the “On Your Own” video here:

Look for SERGE DEVANT to tour in support of REWIND. Confirmed tour dates this spring, with more to be announced, include: 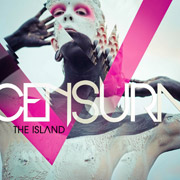