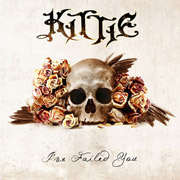 The Lander sisters, Morgan and Mercedes, have made a carrier with Kittie, forming back in 1996 and releasing their debut, Spit, in 1999. Over the years the duo have seen line-up changes galore but endured and released a handful of albums. In 2011 Kittie put out their sixth studio CD, I’ve Failed You, via E1 Music.

As soon as album begins the title track starts up and gets right into the swing of things with Kittie’s trademark slow, but heavy metal music. Guitarist Tara McLeod has written the band’s most complex guitar licks to date, giving the songs added personality, while Morgan screams her way through the majority of the album with the occasional sung chorus. What failed me on this release though, was the sheer lack of energy behind the sung vocals.

Sadly Kittie’s I’ve Failed You is the first of their albums that just did not spark my interest. Nevertheless, I will still and surely forever be a Kittie supporter. Horns up to the Ontario quartet!